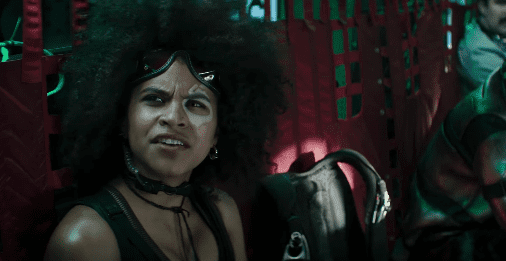 Just a day after Warner Bros. announced that the new Joker origin movie starring Joaquin Phoenix would hit theatres in October 2019, a big piece of casting news has now been revealed. Deadpool 2 and Atlanta star Zazie Beetz is in talks to join Joker, according to The Hollywood Reporter. Should Beetz sign on for the movie, she will reportedly play a single mother who “catches the interest” of the man who goes on to become the Joker.

That’s all the information we have to go on at the moment, and it’s unclear how far along the talks are between Beetz and Warner Bros. So far, Beetz is the only other cast member besides Phoenix–who is playing the Joker–for the upcoming movie.

Joker is being directed by The Hangover series director Todd Phillips. Phillips is writing the script alongside Scott Silver, who wrote for the Oscar-winning movies The Fighter and 8 Mile.

According to a previous report, Joker has a budget of “only” around $55 million. The film will apparently be more “experimental in tone and content,” likened to a “crime drama.”

Phoenix previously spoke about why he was attracted to the project. “…I always felt, like, there were characters in comics that were really interesting and deserve the opportunity to be kind of studied,” he said. “And so I think that’s what Todd sees appealing about this idea.”

The new Joker movie with Phoenix is separate from the other one starring Jared Leto as the Clown Prince of Crime. Phoenix’s movie will reportedly have no impact on Leto’s portrayal of The Joker in future movies–including Suicide Squad 2 and his film.