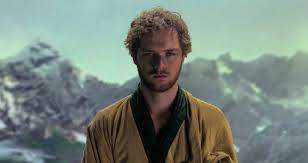 Iron Fist Season 2–or Iron Fist 2 for short–will arrive on Netflix on September 7, the streaming company announced during its Iron Fist panel at San Diego Comic-Con 2018. The new season will feature fight choreography by Creed and Black Panther choreographer Clayton Barber, and will guest star Simone Missick as Misty Knight and Alice Eve (from Star Trek: Into Darkness) as villain Typhoid Mary, next to Jessica Henwick (Colleen Wing) and Finn Jones (Danny Rand)–all of whom were in attendance on the panel.

Netflix also showed footage from Iron Fist Season 2 during the panel. In one short clip (watch it above), Rand puts his fighting skills to use stopping an alleyway robbery. In a voiceover, he says, “A war is brewing. This is my city now. It’s my duty to protect it. And I’m not letting it down.”

Jeph Loeb, the head of Marvel Television, said one of their goals was to “up the game” in terms of the show’s fight choreography in Season 2. In an exclusive clip, Rand fought a whole crew of bad guys, showing off a crisp new style of action for the show.

The clip showed Rand standing in the middle of the street with a cloth mask over the bottom half of his face, wearing a hoodie. Rand holds up his hand, and a truck stops in the middle of the road. The driver guns it, and Rand sidesteps, iron-fisting the truck’s front end and knocking the wheels off. He beats up everyone in the truck, dodging gunfire, and ends the fight by iron-fisting the ground, knocking all his opponents down and setting off nearby car alarms.

Henwick went on to tease the Daughters of the Dragon, a fan favorite duo consisting of Colleen Wing and Misty Knight. Another exclusive clip showed Misty and Colleen fighting together, before breaking off into separate battles. Misty uses her metal arm to knock an assailant off a motorcycle, while Colleen fights off two other skilled women inside.

Yet another clip showed the two engaged in a fight with the machete-wielding Typhoid Mary, Eve’s character, a comics villain who’s new to Marvel’s live action universe.

“Seeing these two badasses together, I think these fans are going to love,” Henwick said during the panel.

Missick compared her place in Iron Fist Season 2 with Colleen’s role in Luke Cage Season 2. “Misty comes to Iron Fist season 2, where Colleen is kind of in a similar headspace [to Misty in Luke Cage Season 2]; she’s not really sure where she is in the world, where she fits in terms of helping her community, and Misty’s there to tell her to pick herself up,” Missick said. “And there’s no BS between these two; it’s not like them sitting on the couch like, ‘Oh my god, what’s up with you and Danny?’…That’s the best thing about these two women’s relationship.”

Another clip, a flashback set inside K’un-Lun, showed Danny and Sacha Dhawan’s character Davos facing each other in an extremely brutal ritual fight meant to determine which of them would face the infamous dragon and become the Iron Fist. In the clip, the two donned familiar-looking yellow masks, eliciting cheers from the crowd. By the fight’s end, both characters are covered in blood. In a separate clip, Davos’s fist appeared to light up–another tease for comics fans.

All of the footage shown seemed like a significant step up from Iron Fist Season 1, which famously did not receive a warm reception from most fans or critics, especially when compared with Netflix’s other Marvel shows. We’ll see if the entire new season maintains this heightened quality when Iron Fist Season 2 arrives on Netflix September 7.