Spider-Man: Far From Home Director Jon Watts seems unfazed when I ask him if, after capturing what made the character of Peter Parker so great in Spider-Man: Homecoming, he’s given himself a tough act to follow in the web-swinging sequel.

His answer is simple. “You have to tell the story that’s right for the characters.”

That story places both Peter and his Super Hero alter-ego in unfamiliar territory, half a world away from the skyscrapers of New York that Spider-Man calls home. Peter finds himself shepherded to the other side of the globe along with his classmates as part of a school trip across Europe.

It’s a welcome vacation from web-slinging that’s sadly disrupted when he’s enlisted by Nick Fury (Samuel L. Jackson) and paired with a mysterious new ally Quentin Beck (Jake Gyllenhaal) to combat a fearsome new threat. With Earth’s defenders now in short supply following the events of Avengers: Endgame, Peter must decide where his ultimate responsibility lies: protecting the world or the life he’s built with his friends.

I’m talking with the movie’s director during a brief promotional pitstop in London. The whirlwind global press tour for Spider-Man: Far From Home, releasing in cinemas worldwide this week, has returned him and key cast members to within a few miles of where part of the movie takes place, at one of the city’s iconic landmarks: Tower Bridge.

“I thought of Homecoming as being the story of a kid who is desperate to prove himself but the world isn’t listening to him,” says Watts of the dilemma facing Peter in this follow-up to the 2017 film, which he also helmed.

“This movie is essentially a sequel to Endgame. It’s the situation were the world is now looking to this kid and for the first time the kid isn’t sure if he’s ready.”

The challenges that arise require Peter to don two new suits over the course of the film. You’d think that nailing a duo of new looks for one of the world’s most recognizable Super Heroes must have been as much of a creative headache as crafting bombastic action sequences and emotionally-charged character moments.

Not so, according to Watts, thanks to the talents of Ryan Meinerding. “He’s incredible,” the director says of Marvel Studios’ Head of Visual Development, who has had the enviable task of adapting the iconic costumes of Marvel’s biggest heroes for their cinematic debuts.

According to Watts, his brief for Meinerding was, well, brief. “‘Make it real, make it cool.’” Meinerding’s response was “amazing,” says Watts, as he presented to the director a black-clad ‘stealth’ suit and an upgraded version of the classic Spider-Man costume. 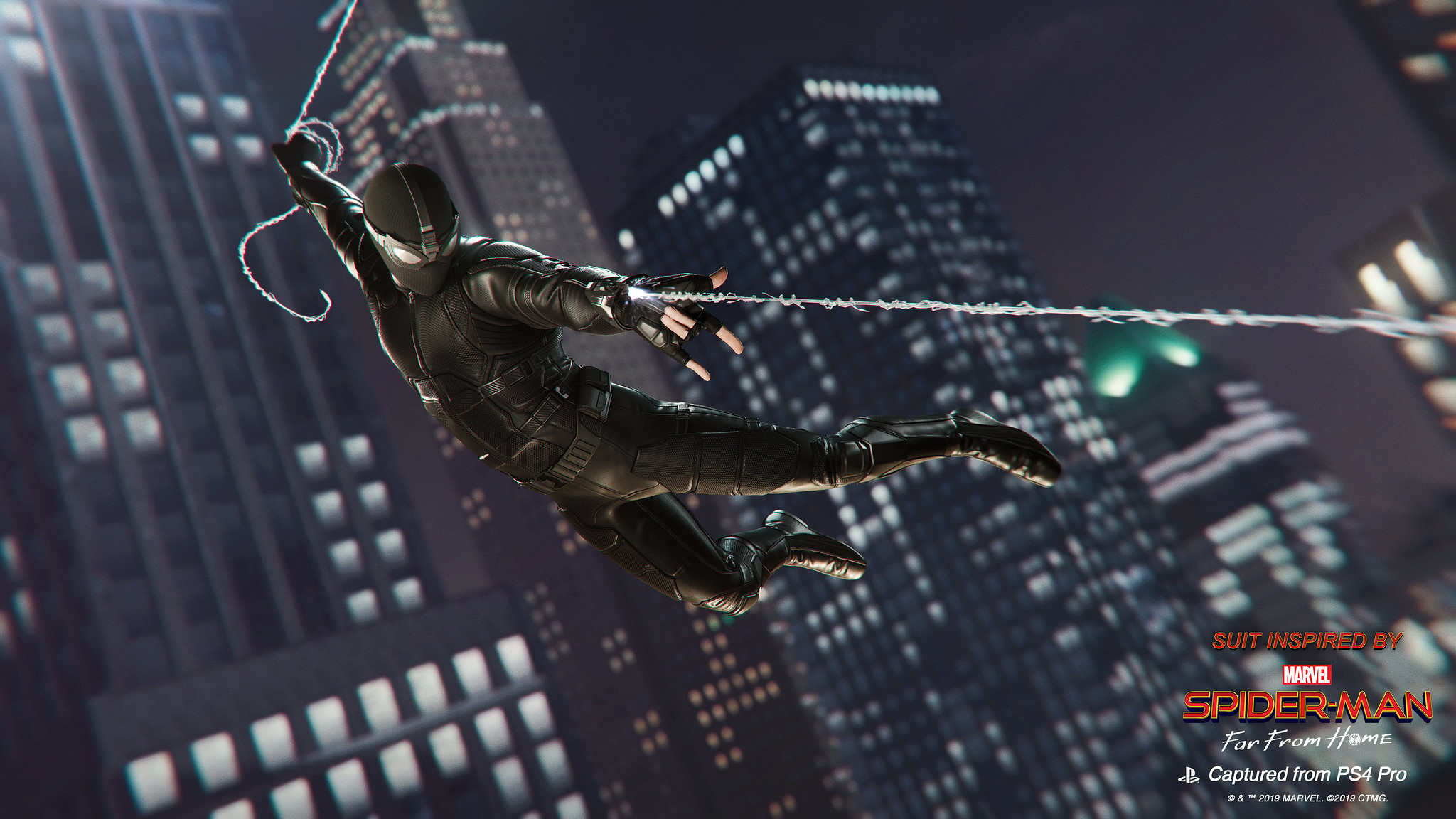 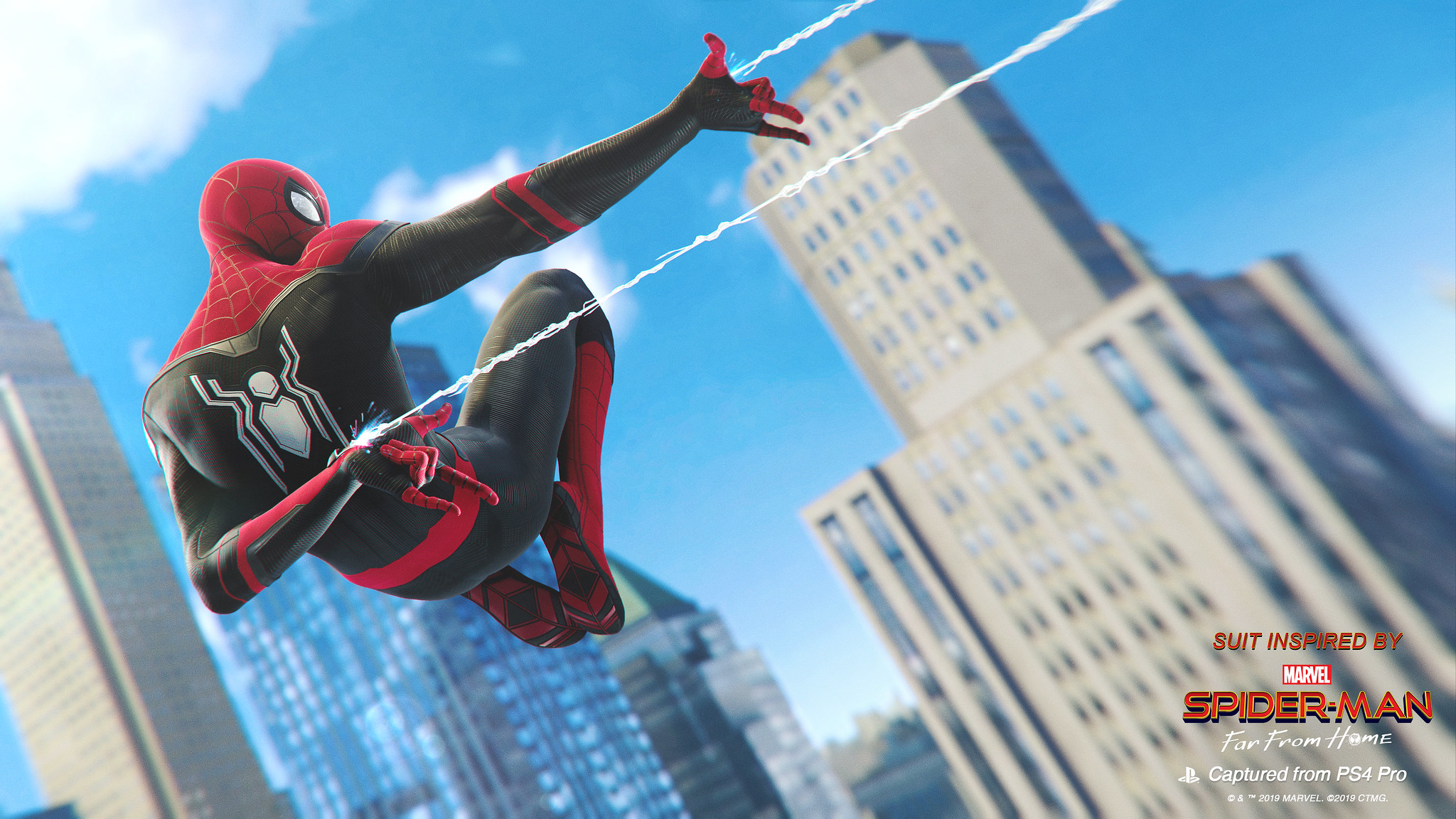 While the Stealth Suit is a “stripped down” all-black version of the standard costume, masking the fact Spider-Man is operating in Europe to avoid further raising the suspicions of his classmates, the upgraded suit represents a milestone for the character. It’s the first Stark-tech Spider-Man suit specifically built by Peter, rather than having it gifted to him pre-made.

“It was something I really felt like we needed to see happen,” explains Watts. “It was a really important story beat for me: it’s part of his growth. It’s supposed to be about him getting out from underneath this shadow of Tony Stark… he’s stepping up and becoming his own Super Hero.”

The result is a long way from the customized sweatsuit Peter began his Super Hero life with (seen in both Captain America: Civil War and Spider-Man: Homecoming). But Watts finds that bargain-basement garb particularly endearing, citing it as his personal favorite design of Spidey’s growing wardrobe.

“He made it, he colored it himself,” says Watts. “I think there’s just something really cool about that.”

I mention how pleasantly surprised I am that he managed to make Mysterio’s traditional look work on the big screen. The ‘fish bowl’ helmet that Jake Gyllenhaal dons during key action sequences is as source material accurate as they come. It looks brilliant on comic book splash pages but could — should — have been notoriously difficult to translate into live action.

Again, Watts points to Meinerding as the reason for the seemingly effortless translation, nailing the design on his first pass. “Our very, very first sketch became the thing that we built,” the director confirms.

Putting a fresh spin on an iconic character

Watts has helped develop the Marvel Cinematic Universe version of Peter Parker over both Spider-Man: Homecoming and now Spider-Man: Far From Home, building upon his scene-stealing debut in Captain America: Civil War and the essential part he played in the larger ensembles of both Avengers: Infinity War and Avengers: Endgame.

While the MCU version looks to the high school era of the character’s earliest years as its primary inspiration, Watts also pays homage to Spider-Man’s long history in comics.

“What’s great about Peter Parker is you can pick different sections of his life and tell a compelling story,” he explains.

That’s something Insomniac Games embraced with last year’s critically-acclaimed Marvel’s Spider-Man, bringing its own spin to an experienced Peter Parker, charting the day-to-day struggles as his personal and Super Hero lives spectacularly collided.

Try out Spider-Man’s new suits for yourself

Watts was a fan of the game’s narrative (“I really liked it; I thought it was a great exploration of the Peter Parker story”) though he had to put the controller down to finish the movie. He was so invested in putting the finishing touches to the project, that the suits’ cameo in the PlayStation 4 game came as much as a surprise to him as it was for players.

“It was an ‘oh by the way, check out the suits in the game,’” he cheerfully recalls of the moment during production when someone passed him a tablet with in-game shots of the suits. “I didn’t realize they were doing it until they had the finished design!”

You can appreciate the finer details of both suits right now in Marvel’s Spider-Man for PS4 thanks to the free update* for Insomniac Games’ critically-acclaimed take on the wall-crawler.

They join the trio of preexisting MCU costume choices — the Stark Suit, the Iron Spider Suit and the Homemade Suit — to give you a complete suite of Marvel Cinematic Universe outfits to save the world in (or to snap some heroic shots of in Photo mode).

Spider-Man: Far From Home is releasing in cinemas worldwide from this week. Check your local cinema for screening times.

*Internet connection and a copy of Marvel’s Spider-Man required. Players must reach a certain point in the game to unlock suits.