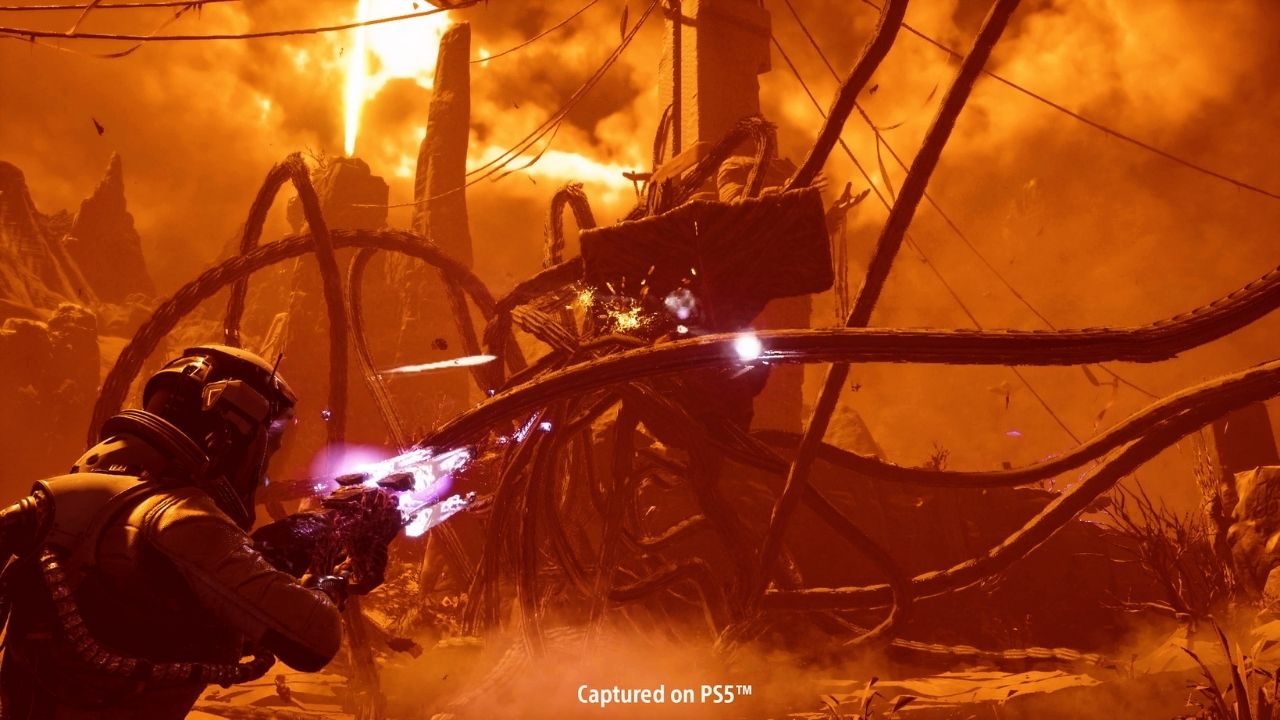 Hello everyone! We at Housemarque hope you are all enjoying Returnal. We’re so amazed by and grateful for the responses so far. I want to thank you on behalf of the entire team.

In Returnal our goal was to use the DualSense wireless controller to provide a physical experience of feeling, fighting and exploring Atropos. We wanted to add texture and feedback both in terms of gameplay but also bring a new level of immersion and atmosphere.

For the technical side and implementation, we have Harvey Scott, one of our amazing sound designers from PlayStation Studios’ Creative Services Group in London contributing to this post. Harvey was a key sound designer for the haptic feedback in Returnal, and a lot of what you feel in the game is Harvey’s amazing work. More from him later in the article.

During production, our teams were some of the first in the world to experience and learn about PlayStation 5 at Housemarque. I remember clearly our XDEV Producer Pedro Sousa showed us some technical demos from teams in Japan, and he inspired us and drove us to make the most of this technology. We were all struck by the DualSense controller prototype and the potential presented by haptics and adaptive triggers.

With the adaptive triggers on the DualSense controller, our Player Team at Housemarque performed lots of tests and research into how we could use this new functionality in Returnal. We knew we had amazing weaponry on Atropos and using the adaptive triggers for this firepower was a natural fit. Henri Markus, game designer, researched and spent a lot of time with the adaptive triggers, and eventually Henri and Harri Tikkanen, co-founder of Housemarque, came up with the alt-fire trigger functionality – pull half-way to focus aim, feel the satisfying click and then all the way down to enter the alt-fire mode.

Less than a week after receiving the PS5 development kit and our own prototype of the controller, the feature was in the game. At first, implementation didn’t click for us. However, as we tested, refined, and polished, it all came together.

We also started to envision our use of haptic feedback with the DualSense controller for Immersion, Communication and Power. Harvey will now provide more of a deep dive into how we wanted you to feel the journey, the texture and actions as you fight through Atropos with Selene to “White Shadow.”

Next up, Housemarque Sound Designer, Harvey Scott, explains how Returnal’s soundscape ties together with the DualSense controller to make a truly immersive experience:

The DualSense controller’s haptic feedback is powered by technology that makes it similar to that of a loudspeaker or headphones. Which means that as a sound designer, I can take the same principles and techniques used for designing sound and apply them to creating interesting haptic feedback experiences.

When we first began working on Returnal we knew we had to realise the full potential of the DualSense controller, whilst also staying true to the other design pillars of the game, and above all, creating the best possible experience for the players exploring Atropos with Selene.

The immediate new potential the DualSense controller brought to the table is the ability to fully convince and immerse players with haptic feedback detail that simply was not possible before. We can now provide subtle details that cross the threshold for what the hands and brain believe to be real and truly bring the players consciousness into the world on screen.

As an example, the rain in Returnal is complemented by subtle raindrop haptic pulses, that are procedurally synthesised at runtime, which allowed us to refine and tweak the feel of them on the fly whilst playing in-game. The end result of that approach is that along with the visuals and audio, the haptic sensations produced by the DualSense controller give your subconscious brain yet another indication that it really is in the world of Atropos, standing in the rain.

Something else that we were able to now do with more immersion than ever before are cinematics. They are an important backbone of the narrative experience and often a memorable and dramatic part of any game. Often, cinematics can be a somewhat passive experience compared to gameplay, but the ability to now provide haptic sensations to complement and reinforce the visual-audio experience with greater detail than ever before, means that we can really go all out in terms of making sure the player is fully engaged and literally feels each moment of the cinematic action on screen via the DualSense controller.

Another key element of the haptic experience in Returnal is making sure the player can really feel their control over Selene’s movement during gameplay. For example, Selene dashing in a particular direction will weight the haptic feedback to the corresponding side of the controller, or the harder you land after jumping will dictate how hard you feel Selene’s feet hit the ground and her suit absorbing the shock. Collecting Obolites produce individual granular taps as each one is deposited into Selene’s suit, partly for the satisfaction of knowing you are racking up your Obolite balance piece by piece, but also to give the items a tangible physicality, with a level of detail that is only now possible with the DualSense controller.

Along with immersion, communication via haptics is yet another key game design tool unlocked by the DualSense controller, allowing us to telegraph critical cues during combat in new and attention-grabbing ways.

For example, weapons in Returnal have an alt-fire ability that requires recharging between shots. During combat, knowing when that alt-fire ability is primed and ready to go can be the difference between life and death, so it is absolutely essential that the player is made aware of its readiness status. Part of the equation on how to communicate this, is via on-screen cues and with audio feedback, but now that we can provide a distinctive haptic pulse via the DualSense controller, we can really grab a player’s attention in the heat of combat and alert them to the one thing that could save Selene’s life, allowing them to continue their run. By using a unique haptic pulse for something like this, along with audio and visual cues, we hoped that players would develop a kind of Pavlovian response to hearing, seeing and now feeling the cue that their power weapon has just become available again.

An interesting concept in Returnal that we wanted to communicate to players are parasites, which can grant beneficial traits to a player, but also ones that will actively damage you. We needed to differentiate damage caused by parasites to other sources in the game, the haptic sensation of the parasite’s tentacles gripping and tightening around your suit provided an interesting way to help make that differentiation, again communicating to the player and telegraphing critical information via the DualSense controller in new ways, rather than fully relying on traditional means to do so.

We tried to preserve the most intense and heavy feeling haptic moments for the greatest threats in the game alongside the most powerful weapons and tools available to Selene. By using this restraint, we can generate a middle-ground baseline for where most haptics will sit on the power spectrum, but when the time comes to deliver a sense of weight and power we can really ramp up the intensity and take the player by surprise.

For example, Returnal’s alt-fire ability known as Killsight produces an immensely powerful single shot projectile that devastates enemies as it travels through them at high velocity. To convey that level of focused power, we maximise the intensity of that haptic pulse so it stands out from all other haptic feedback, giving your hands a real sense of kickback and selling the power behind that ability’s potential for damage.

So, although it may be tempting to give every aspect of the game haptic feedback that turns the DualSense controller’s power up to 11, by reserving it only for the right moment we can help ensure that Returnal provides a huge range of different tactile sensations from individual raindrops, to the sensation of releasing arcing bolts of electricity that shatter Selene’s foes with immense power.

Cheers, Harvey. So here’s our origins with the DualSense controller, our philosophy and how we brought it to life in Returnal. It was a big team effort to pull this off. Enjoy Returnal if you haven’t already, too. Thanks for reading and stay well all!