Exit the Gungeon Reloads on Xbox One | Blogdot.tv

Today, we’re super excited to announce that Exit the Gungeon, the newest adventure in what we like to call the Dodge Roll Semi-Automatic Gungeonverse is now available for Xbox One!

Our team has been working hard alongside the hardcore Gungeoneer at Singlecore Games to create the bullet hell experience you’ve come to expect from the Gungeon… except this time filled with a series of increasingly perilous elevators. We’re extremely excited that Xbox One gamers can finally get their trigger fingers on Exit the Gungeon today, complete with the new Hello to Arms update.

For the uninitiated, Exit the Gungeon is a bullet hell dungeon climber immediately following the adventures of the misfit ‘Gungeoneers’ and their journey for personal absolution in Enter the Gungeon. Each of our heroes must ascend and escape via their own unique route, battling the last and most bitter of the Gundead at a frantic pace, slowing down just long enough to chat with some familiar faces… and a few new ones. Shifting rooms, enemies, bosses, bizarre weapons and items all combine to ensure that no two attempts to Exit the Gungeon are the same.

The Hello To Arms update aims to address player feedback from the initial release, and reloads Exit the Gungeon with an arsenal of new additions, including weapons and items, an expanded in-game shop, added player choice, new minigames and more bizarre NPCs to shoot the breeze with, plus a brand-new, and long running fan requested boss; the Glocktopus. And yes, you can now pet the dog.

But wait! Hello to Arms also introduces the all-new Arsenal Mode, a toggleable game mode in which weapons are available as loot as well as for purchase in shops. Any number of these weapons can be held in addition to the Blessed gun, and can be used at any time. These additional guns have limited ammunition, which can be replenished by finding ammo pickups. This mode is in direct response to player feedback and is meant to be familiar to Enter the Gungeon’s gun management, so veteran Gungeoneers will feel right at home.

We hope Xbox gamers are as happy as we are for Exit the Gungeon’s long-awaited release, and we’d like to thank everyone at Microsoft and the ID@Xbox team who have helped bring our humble shooter to you all! 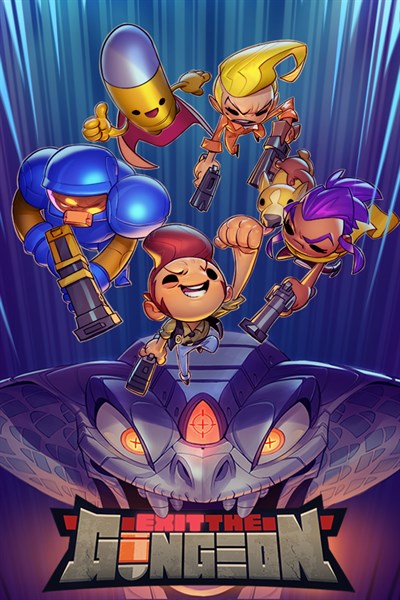 ☆☆☆☆☆
★★★★★
$9.99
Get it now
Exit the Gungeon is a small, arcade-style, spin-off 'dungeon climber' that immediately follows the adventures of the misfit Gungeoneers attempting to survive a series of increasingly dangerous elevators and countless waves of enemies. The Gungeon has become a paradox and is collapsing! Blessed by the magic of the Sorceress, your gun will change rapidly as you ascend the Gungeon. The better you play, and the higher your combo, the more powerful the form your gun will take. Battle against the last and most bitter of the Gundead at a frantic pace, slowing down just long enough to chat with some familiar faces… and a few new ones. Shifting rooms, enemies, bosses, bizarre weapons and items all combine to ensure that no two attempts to Exit the Gungeon are the same.