Paradox Interactive Community Manager Emma Kunjansuu: The Age of Wonders series has nearly two decades of history since the first game released in 1999. Now, we are on our third expansion for the latest game, Age of Wonders: Planetfall. What did it feel like to build on this expansive universe with the latest expansion?

Triumph Studios Lead Developer and Designer for Age of Wonders: Planetfall – Star Kings Tom Bird: It was mixed really! On the one hand, this is the first time I personally had full control to develop an expansion myself, which is very exciting. On the other hand, there’s already so much in the game already, it was intimidating trying to come up with something that could stand up on its own and feel both new and different from what we already have.

Kujansuu: How did you and the team come up with the Oathbound? What was the inspiration behind the creation of this faction?

Bird: We wanted to make an expansion that was a lot more positive than the previous ones, where there was a feeling of hope for the future rather than fear of alien invaders or repressive ancient cults. We settled on using Arthurian legends as the main inspiration, a group of noble knights, guided by mysterious wizards, on a righteous quest! This also gave us the idea for the “Grail Configurations”, which are another new feature.

Kujansuu: I really like the design of Champion. All the designs are very creative, really. The Paladin units look both alien and divine. Can you tell us a little more about how you came up with these designs for the units?

Bird: When designing for science fiction, it is helpful to think of some clearly identifiable shape that we can use as a motif. This is a shape or design element that we can repeat throughout our designs, unifying disparate units into a single race. For the noble, mighty paladins, we decided on circles as a motif, because of their connotations of perfection and associations with the divine. Wherever we could, we tried to implement golden rings and elegant single curves, giving a sense of flow and movement that makes the paladins feel fast and graceful. This is a design element that we also tried to include in the seers, and overall acts as the unifying design language of the entire race.

Because the Oathbound are meant to be the pinnacle of human development in Planetfall, we tried to make their technology look as futuristic as possible. This largely came from obscuring any obvious mechanical function. You won’t see any cog-like joints, mechanical pistons, or exposed cables on the paladins. Many elements of their machinery float without any obvious explanation. This suggests that paladin technology is so advanced that it is beyond our modern understanding and gives subtle allusions to divine beings or aliens.

As a general design principle, we also tried to make them as a unique as possible by avoiding the first and most obvious tropes. Take the Champion for example. Here, we knew that we needed a flying mech with a giant sword, so instead of jumping to the first and most obvious idea (a jetpack, rocket feet), we gave it flight through energy emitting ‘wings’, and removed it’s feet entirely. Take the Warden as another example. We knew that we needed a ranged unit, so an archer was the obvious choice for a race based off medieval warriors. However, instead of merely giving it a mechanised bow and arrow or crossbow, we gave it two massive ‘bows’, one on each arm, that function as energy cannons. The essence of it is to take your first, most obvious idea, and then give it a little twist.

Of course, the role of unit art, as well as looking cool, is to communicate to the player what that unit can do. The Protector is a melee unit with powerful defensive abilities, so it needs a melee weapon and a large, eye-catching shield. The Champion can fly and has a devastating melee attack, so it needs a propulsion system and a truly enormous sword. These decisions may seem obvious, but it’s of such paramount importance that it’s something we’re always thinking about. If there’s one thing we’ve learned, it’s that we can always work to improve on how our designs communicate to the player.

Kujansuu: It’s part of the process of development that not every idea makes it in, even ones we love, for a variety of reasons, from deadlines, to costs, to testing out what is fun and what isn’t. What were some of the ideas in Star Kings we had to leave on the cutting room floor and which was your personal favorite?

Bird: One of the main things that Knights are famous for is fighting dragons. There was an idea of having super boss monsters that you would go on quests to slay, maybe they’d be so big that you’d actually have battles on top of or inside them! Sadly, with all the other big features we were committed to making, there was just no time for such a concept to be made.

Kujansuu: Tell us a little about the Seers. What kinds of powers or abilities do they have? Why did you give them these capabilities?

Bird: The Seers use a super-computer called Oracle; it collects vast amounts of information about the world and uses it to predict the future. The Seers use Oracle to understand and control the flow of battle, which in gameplay terms works by letting the player cheat at key moments and force the game’s dice to roll a particular number in their advantage. For example, the Augur can curse a target with Fatalism, which means you will never miss it if you shoot it. The Watcher can bless a unit with Providence, and that unit will always roll Critical Hit when it rolls to hit.

Kujansuu: Do you have a few tips or tricks you could share for those who are returning to the Age of Wonders: Planetfall so they can jump right in and play?

Bird: Your starting Paladins work well in tight formations, so keep them bunched up and try to get the Oath of Loyalty mod as soon as possible to make your formations stronger.

There is a doctrine called Pre-Battle Prediction which will hugely increase your units survivability by letting them ignore the first attack that hits them in each battle.

Don’t forget your Seers, the big robots will kill your enemies, but it’s the Seers who keep them alive in a universe where they literally brought a sword to a gunfight.

Kujansuu: Thank you for taking the time to write such thorough replies Tom! And thanks to everyone for reading our behind-the-scenes look at Star Kings, available now on Windows 10 PC and Xbox One! 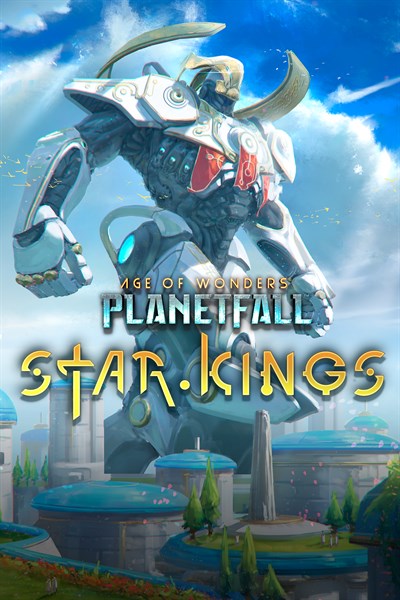 ☆☆☆☆☆
★★★★★
$19.99 $17.99
Get it now
Suit up as the noble Paladins of the new Oathbound faction, piloting giant mechs with massive arc weapons who have taken up the sacred charge of unifying the galaxy and saving all of mankind. New Features New playable faction – The Oathbound: New Campaign Grail Configurations Battle New Wildlife