Enter the Stormlight Archive in VR, with Way of Kings | Blogdot.tv

Part of Brandon Sanderson’s fantasy epic The Stormlight Archive has been translated from the printed page to VR with this VR experience from Arcturus. We spoke with Ewan Johnson, Chief Creative Officer at Arcturus, about re-creating the world of Roshar.

Can you give us a brief overview of the world of The Stormlight Archive?

For those that are new to Brandon Sanderson’s Stormlight Archive series, The Way of Kings is the first book in an epic series set in Roshar, a world of stone and storms. Uncanny tempests of incredible power sweep across the rocky terrain so frequently that they have shaped ecology and civilization alike. Animals hide in shells, trees pull in branches, and grass retracts into the soilless ground. Cities are built only where the topography offers shelter.

It has been centuries since the fall of the ten consecrated orders known as the Knights Radiant, but their Shardblades and Shardplate remain: mystical swords and suits of armor that transform ordinary men into near-invincible warriors. Men trade kingdoms for Shardblades; wars are fought for them, and won by them. One such war rages on a ruined landscape called the Shattered Plains. There, Kaladin, a medical apprentice, has been reduced to slavery. In a war that makes no sense, where ten armies fight separately against a single foe, he struggles to save his men and to fathom the leaders who consider them expendable.

It is the scale of the Shattered Plains, the creatures that roam them, and the power of stormlight, that all combine to create an amazing opportunity for VR and we have only taken a few steps with this interactive narrative. 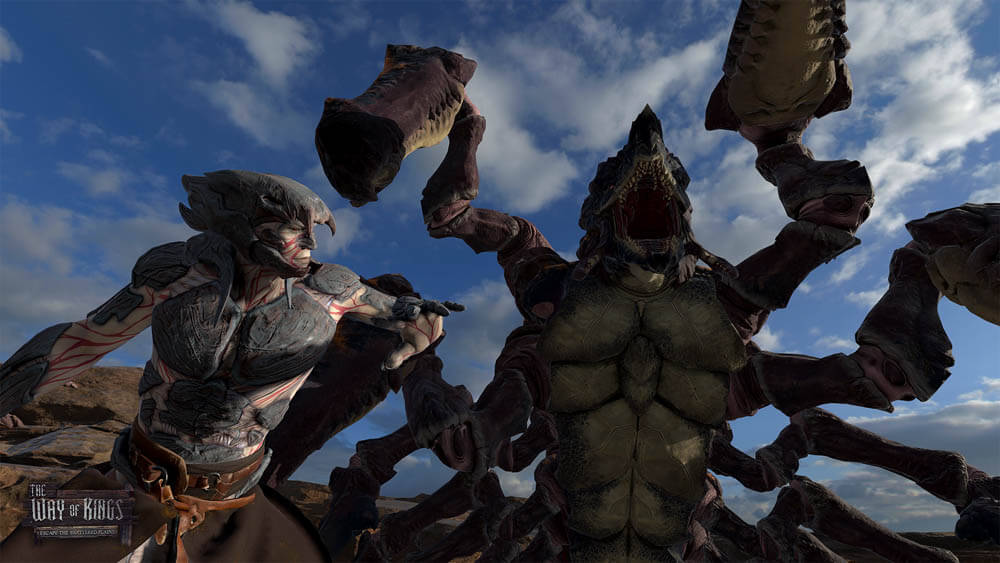 How does the VR experience link up with The Way of Kings as a book?

Our VR experience is a short form adaptation written by Joshua Rubin (known for his work on Destiny, Assassin’s Creed 2, and Telltale’s Game of Thrones). You experience the world of of Roshar through the eyes of Kaladin. You will walk on the Shattered Plains during a high storm, learn to harness the power of stormlight, battle the Parshendi, and encounter some surprises along the way. Throughout the experience, Syl — a playful, fairy-like Spren — will be there to guide and assist you in understanding your new powers.

We wanted to provide an introduction to this world and we believed that by using Kaladin and his journey, as well as relying on Syl to be our mentor and guide, that we were able to stay true to the broad storyline in the book. The whole book is not in here of course, but we think this is a short, fun experience for new audiences as well as those familiar with the lore.

Can you tell us about Syl? Is she a guide, a companion, a sidekick or something else?

We feel that Syl is pretty unique. She is a guide, a companion, and a sidekick in the stories. What is unique and special for her is that in the books she becomes sentient, and we wanted to try to capture the feeling of that in the experience. So at times she helps you figure out how to complete the experience, but she also discovers and explores the world alongside you. This allows her to teach you about the world without coming across as expositional or just a tutor. We hope you’ll enjoy her company and that her guidance will serve you well. Pay close attention to her because you’ll learn some important lessons if you listen. 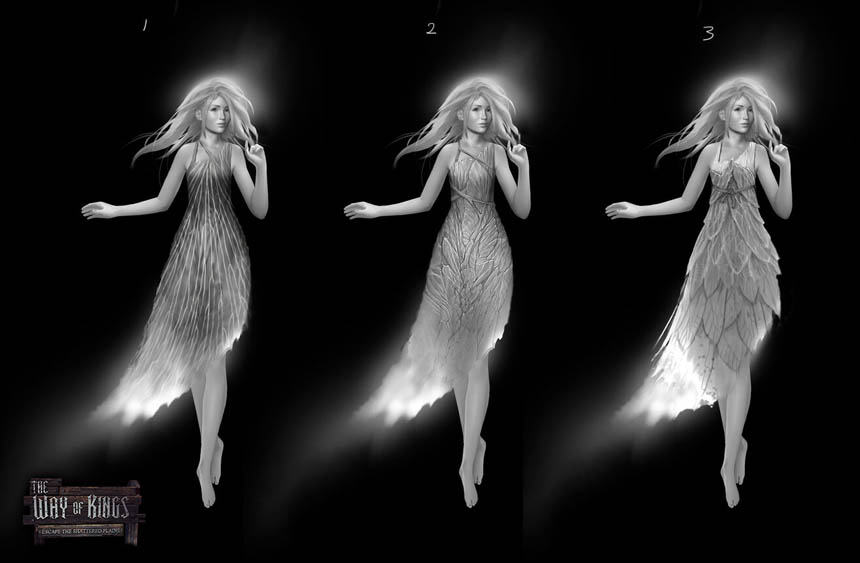 Concepts for Syl in The Way of Kings.

What was the origin of the VR project (apart from the book)?

We were all attracted to adapting Brandon’s world because of the breadth of the story and the magic systems, which seem uniquely suited to VR. From there, Kaladin’s hero journey was particularly appealing because it allowed us to put the viewer in the hero’s shoes.

Production-wise, the project started with DMG who acquired rights to Sanderson’s novels for multi-platform development and asked us to explore a VR experience that would help executives quickly grasp the beauty and scale of the Cosmere. Because the scale of this world is so large, we felt that it would take more than a treatment and some concept art to awaken the imagination of just how powerful these worlds could be in a visual medium.

The immersive nature of VR combined with interactivity and exploration allow a much deeper discovery of a story; we could literally allow studio execs to step into the world and experience the characters and environment. By creating a narrative thread to combine the moments within the experience we could provide a deeper sense of the characters at the same time. As we developed the concept and a narrative that tied it all together, it became clear that this was a standalone piece that we should share with the fans. 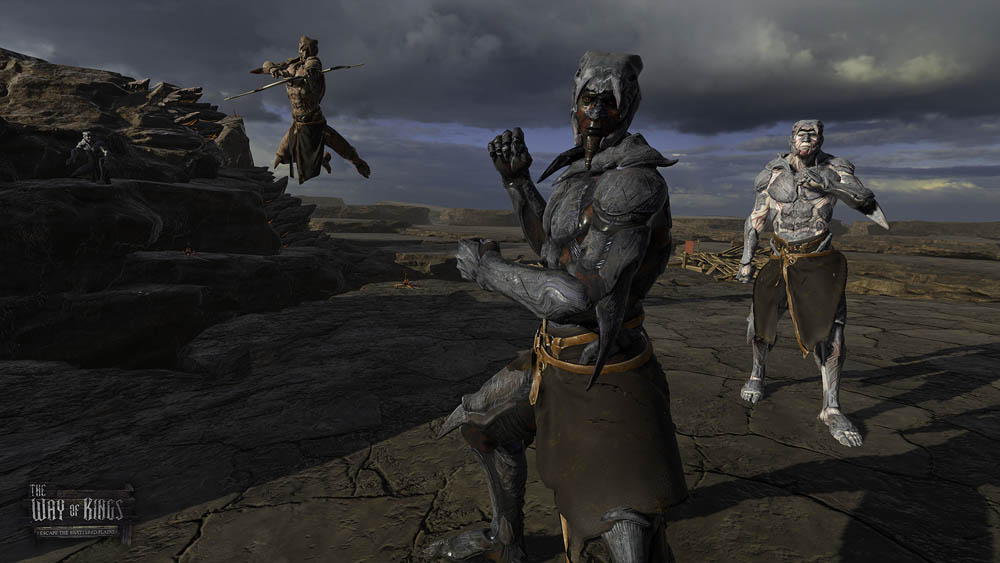 How much involvement did Brandon Sanderson have in the creation of the VR project?

Brandon Sanderson was involved from the very beginning, providing feedback on scripts and artwork. We were thrilled that when Brandon saw it all he loved it and said it matched his vision.

For anyone who might not have read The Way of Kings, are there any spoilers in the VR experience?

Not spoilers per se, because this is an adaptation and not a translation of a given scene from the book. For people new to the story they will find things that they might need to read the whole book to understand, but I don’t see them as a spoiler. Instead we think of it as an inspiration to read this amazing series.

Do you plan to return to The Stormlight Archive for future projects? Will The Way of Kings be updated with new features?

We certainly hope so! As with anything, demand will drive the development of more, but we’ve already been thinking about what the next one might be, and how might further immerse you in Roshar.

Finally… what scene(s) would you like to see created in VR from The Stormlight Archive?

The Stormlight Archive is a rich and deep world that we would love to continue to allow Brandon’s readers to experience in VR. In particular, I would love to develop some experiences around Dalinar’s visions. Having the Radiant’s approach him in his vision and paint a picture of the world and the landscape would be an incredible visual journey.

I would also love to focus some more of the experience on Shallan, her sketchbooks and her abilities. It would be an amazing VR experience to visit the sea of beads with it’s floating flames and distant sun in a black, black sky, that would be breathtaking to experience in VR. And can you imagine how cool it would be to allow you to be a shardbearer and have to wield these amazing swords in actual combat. That is still just scratching the surface of what these books can do!

Thanks for talking with us, Ewan!

The Way of Kings: Escape the Shattered Plains is available on Viveport.