Hello everyone! My name is EdH Müller, I`m the producer, director, and illustrator of Reverie Knights Tactics, and on behalf of the whole 40 Giants team, thanks for checking out our game!

40 Giants Entertainment is an indie gamedev company from the south of Brazil, and we worked on this game along in co-production with Hype Animation and Jambo Editora. Music and sound design was provided by Yo-Ho Musik Arsenal, and the game is published by 1C Entertainment. Our development journey started in 2017, and now here we are, publishing our baby on Xbox!

It is a special occasion for all of us, considering all these years Xbox has been in our lives, and the amazing tactical and RPG games we played on the consoles. So many memories! We’ve always been passionate about the genre, and when we decided to develop our own game, we knew we would face a lot of challenges during the development process that I would like to talk about in this blog post. But first, let me tell you what Reverie Knights Tactics is all about!

Reverie Knights Tactics is a turn-based tactical RPG with strategic battles in isometric grids where every decision can alter the story, NPC reactions and the way you customize the characters. You can craft new items and equipment from the treasures you collect on your travels through a fantasy world in an epic adventure based on the Tormenta RPG campaign setting. In battle, every character has a slew of unique abilities to choose from and based on the situation can perform special team attacks. You can also use many interactive elements on each map and crafted consumable items to change flow and result of any encounter!

Creating and balancing the core systems – battles, character progression and skills – was the hardest part to get right. The game needed to favor strategy, but still be accessible and not too hardcore, and due to the number of player choices available in character customization, side quests and decision-driven, branching story, the difficulty of every battle can vary wildly. The skills available on each character level needed to be both interesting and useful, allowing the player to create different strategy approaches, based on their preferred play style.

On top of that, every battle has extra objectives and each one of them grants the player some extra experience; managing the progression and level capstone to fit the game’s difficulty was hard and demanded lots of playtests and spreadsheets. Speaking of optional objectives brings us to the topic of Level Design. Each battle was always first sketched on a blank grid, then built in the game engine, placing a lot of interactive elements that allow the player (and the enemies) to block paths or create new openings, damage and control their opponents, to make sure each scenario not only looks, but also plays and feels differently.

There’s an awareness system in place that lets the player walk unseen through the grid, as long the character remains far enough from the enemy’s line of sight. Plus, each battle has a different set of extra objectives that encourages the player to go beyond, exploring the scenario and performing specific tasks to receive extra experience.

The game also features a special alignment system based on core story decisions that push your character closer to chaos or order. Based on that, the story branches out and other characters reactions towards you change, affecting battles and dialogues. These decisions also affect the skills that will be available for each playable character, influencing your strategy options as well.

But it’s not just the gameplay design that sets Reverie Knights Tactics apart from other games, it is also:

As the game’s illustrator, this is a subject near and dear to my heart. All the artworks in the game were hand-drawn – nearly 400 sheets of paper were necessary to cover the entire game, and I did every single drawing with a mechanical pencil, using HB leads.

I`ve been working with illustration for over 20 years now, on comics, advertising, CD covers, package designs for bands, drinks, anything that needs some good drawings on it, and of course, games! Working on Reverie Knights Tactics was delightful, definitely one of the best experiences I had in the field up until today.

Drawing battle scenarios was the most challenging part of this project because of the high number of details each of them have, and their multi-layered nature. Hours and hours of sitting at my drawing table during weekdays and many, many weekends. My wife and my cats didn’t like that so much, but I hope you will agree it was worth it as you play the game. Not to forget, I had three amazing helpers during this trip: Marcel Budde and Leonardo Tomazi, who helped me out with sketches for the scenario assets, along with Carolina Mylius, the coloring artist who did the amazing coloring work over my drawings.

As for the characters, it was great to create new characters for the Tormenta universe, which is really popular here in Brazil. I took a lot of time to figure their silhouettes out, along with distinctive characteristics to make each character unique.

I hope you liked this small sneak peek behind the scenes of our design and development journey and have fun playing Reverie Knights Tactics, which is available on Xbox One (and in backward compatibility on Xbox Series X/S) and Windows PC today! 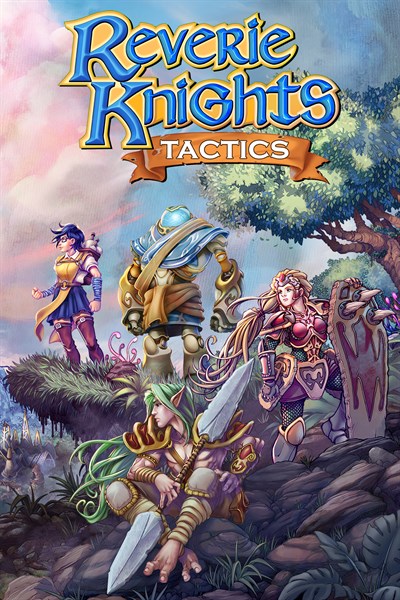 ☆☆☆☆☆
★★★★★
$24.99
Get it now
A turn-based tactical RPG with strategic battles in isometric grids where every decision you make can alter the story and the way you configure the characters. Embark on an expedition to find Lennorien, the long lost elvian city to save your loved ones, while fighting the goblin menace that spread terror across the continent! Lead your party of heroes, each one with distinct, special abilities and skills, allowing you to use multiple battle strategies to defeat your enemies. Discover a fantasy world featuring deep map and scenario exploration in an epic adventure, visual novel style! Craft new items and accessories from the treasures you collect and use them as tactical advantage every time you configure your characters. Key Features:
● Beautiful Hand Drawn Art: Meticulous multilayer artwork from pencil sketch to full detail color.
● Decision-driven Storyline: Make several decisions through your quests, affecting the story and other characters` reactions.
● Character Customization: Customize character`s performance attributes, skills, and accessories for heightened abilities!
● Item Crafting: Collect powerful items as you explore the world and discover combinations to create new items.
● Exploration: Travel your way through an expansive map, unlocking secret quests, solving puzzles, and exploring scenarios and evil dungeons!
● Up to Four Hero Characters: Control 4 different heroes, each one with distinct, special abilities and skills, allowing multiple battle strategies.
● Battle Phases: React to your opponent's strategy and come up with the perfect tactic every turn, challenging you to think ahead.
● Interactive Battle Scenarios: Manipulate parts of the battle environments, and use scenario effects to your advantage!
● Multiple Battle Grids: Each battle contains a different isometric grid, making every battle an unique experience.

Related:
Next Week on Xbox: January 24 to 28
Pupperazzi: How to Take the Best Photos of Dogs, the Most Powerful Beings on Earth
The Last Worker’s Fight for Humanity