VR has the awesome power to make players feel super-heroic like never before. With Doctor Who: The Edge of Time, arriving to Viveport and Viveport Infinity tomorrow, developer Maze Theory had the herculean task of bringing one of the most iconic heroes in sci-fi history to life in VR, placing a Sonic Screwdriver in their hands and tasking them with protecting the universe. We had a chat with them to find out what went into making this thrilling VR adventure.

Marcus Moresby: I’m the Creative Director here at Maze Theory. We’re a digital entertainment studio focusing on ‘Evolutionary storytelling’ – which is our way of describing narrative adventure experiences, told through new technologies and techniques. Our experience and passions come from the areas of games, immersive theatre, film, TV and narrative drama. We bring interactive elements in to create a new form of participatory entertainment.

How did the concept of Doctor Who: The Edge Of Time come about?

The BBC came in to experience one of our other projects The Vanishing Act and they really liked our attention to detail, production quality and approach to immersive storytelling in VR. From there we started talking about Doctor Who and how well the show translated into the medium of VR.

At it’s best, VR is like a teleportation device allowing players to travel to distant worlds, far-away places and go on incredible adventures in space and time. It was obvious to us straight away in that meeting that Doctor Who would translate into a perfect VR title.

By chance, The Doctor Who Experience, a live attraction in Cardiff that documented the show’s 55 year history and exhibited many of its props, sets and characters was about to close. We got talking about photogrammetry and next thing you know we were down in Cardiff creating a digital record of the whole experience. It’s all on a hard-drive in our office.

With access to a wealth of incredible data we couldn’t help ourselves to make a weeping angels demo in VR and things just from snowballed from there.

What have been your biggest inspirations on the design concepts in The Edge Of Time?

We’ve focused on giving people the chance to inhabit and exist in the world of Doctor Who and the show. One of our main pillars in the production was to make you feel like you’re stepping into your own episode of the show. That’s why it was important to include the title sequence, which while breathtaking in VR, isn’t a traditional gameplay mechanic.

We’ve also tried our best to give fans experiences they’d want to have in the world of Doctor Who. Allowing them to pilot the Tardis, come face to face with the Daleks, to solve puzzles and games with the Doctor’s trusty Sonic Screwdriver.

At the same time, it was important not to alienate non Doctor Who fans. Both ourselves and the  BBC want to encourage new audiences to enjoy this universe. At it’s core, it’s a time-travel adventure in VR spread throughout the universe. There’s a combination of sci-fi, horror, adventure and action, all mixed up.

What kind of research did you do to prepare for the task of bringing the world of the popular series to VR?

With a show spanning as many series as Doctor Who we knew we’d have to be thorough with our research. Initially I spent a few weeks completely absorbing myself into it and focused on 70 episodes from the 37 series. Anything that I thought would work particularly well as an interaction, story line or environment was noted down. Then I scoured the various fan sites and forums to view their opinions on favourite episodes, monsters and what they would love to see or experience in a Doctor Who game.

How challenging was it to figure out which Doctor Who creatures, worlds and iconic elements from the series to incorporate into the game?

The BBC have been amazing to work with and initially we gave them a wish-list of all the monsters and places we wanted to include. This led to various discussions regarding the direction and roadmap of the new series and where this experience would fit into the universe. They’ve all been selected because of how powerful they’d be in VR. Standing next to a Dalek in VR with the legendary screaming voice really is intimidating. The Angels were a perfect fit too and VR is probably the only medium you could truly experience them. 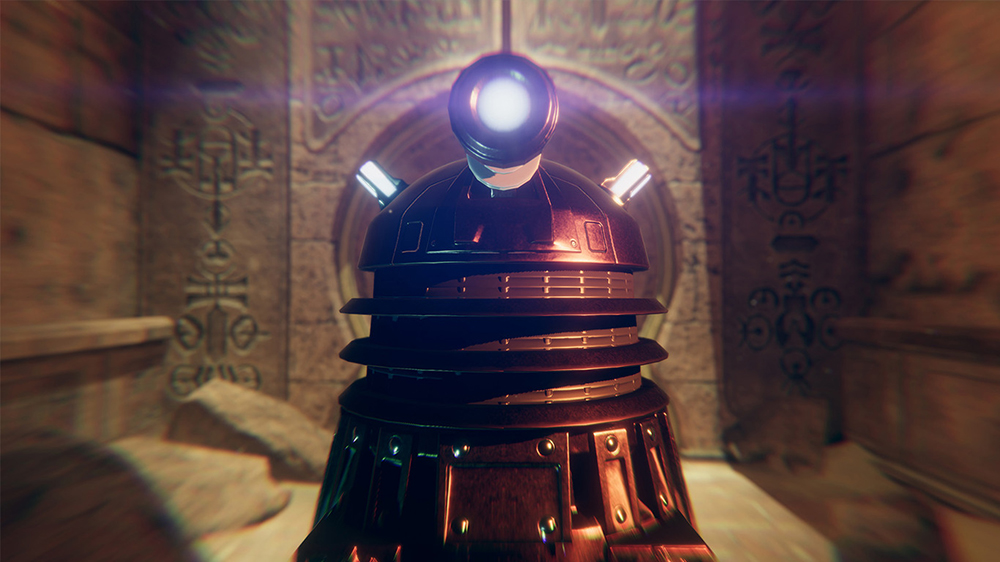 What’s been wonderful is we got to co-write the game with Gavin Collinson, who’s worked on the show since the David Tennant days. It’s meant we’ve managed to get the story right from the perspective of a VR player and they’ve got it all working with the shows’s cannon. It’s really been a collaborative process with the team at the BBC and why we hope the end story works so well.

Were there any story moments, puzzle concepts or other cool ideas that you had that you wanted to incorporate into the game but had to leave it on the cutting room floor?

With a show so vast there’s a ton of material and related gameplay ideas we had to hold back. What a lot of people don’t realize about Maze Theory is we’re a very small team. Only 6 core people worked on the game, but we’ve all tried to hit a close to AAA aesthetic and game. It’s about a 3 hour experience, so not easy to make with such a small team.

Consequently there were a tonne of ideas that haven’t made the cut. On the plus side, there’s lots of good starting points for a sequel. 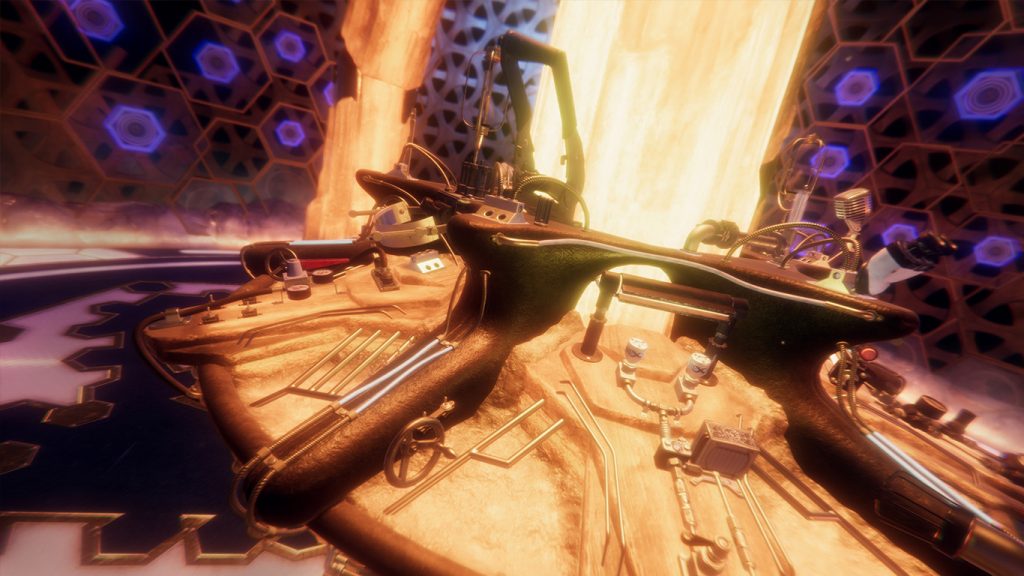 Jodie’s great and a complete natural with her take on the Doctor. We managed to squeeze in some time with her in between shoot days on set in Cardiff and because she’s fully in character we got through a tonne of lines and dialogue in half the time you’d normally expect.

What do you feel are the key things about Doctor Who that make it such a global, decades spanning phenomenon?

Time travel, adventures and science fiction, good drama, strong concepts and story writing – what’s not to like? What we love more is how this personality and character naturally translates to VR. 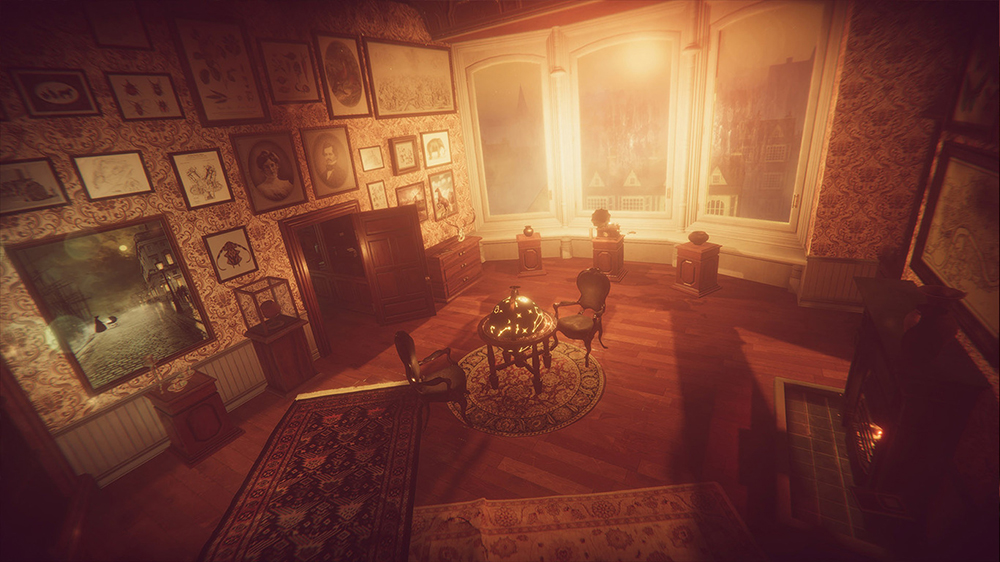 How long have you and the team been working on The Edge Of Time?

It’s been just under a year since we started main production on the game. It’s been a pretty mammoth task for everyone involved but as we get to the end of the project everyone is really proud of the title and what we’ve achieved.

What’s on the horizon for Maze Theory?

We’re thrilled to be working on Peaky Blinders and have just commenced production. It focuses heavily on human interaction and how you can make a character feel alive inside a virtual world. Everyone’s very excited about the idea of traveling back to the 1930’s and the narrative adventure you get with a gangster title like that.

We’re also working on a couple of own concepts internally. It’s important for us that we aren’t just known for big IP projects and we imagine our third title will be something unexpected which learns from our previous R&D. 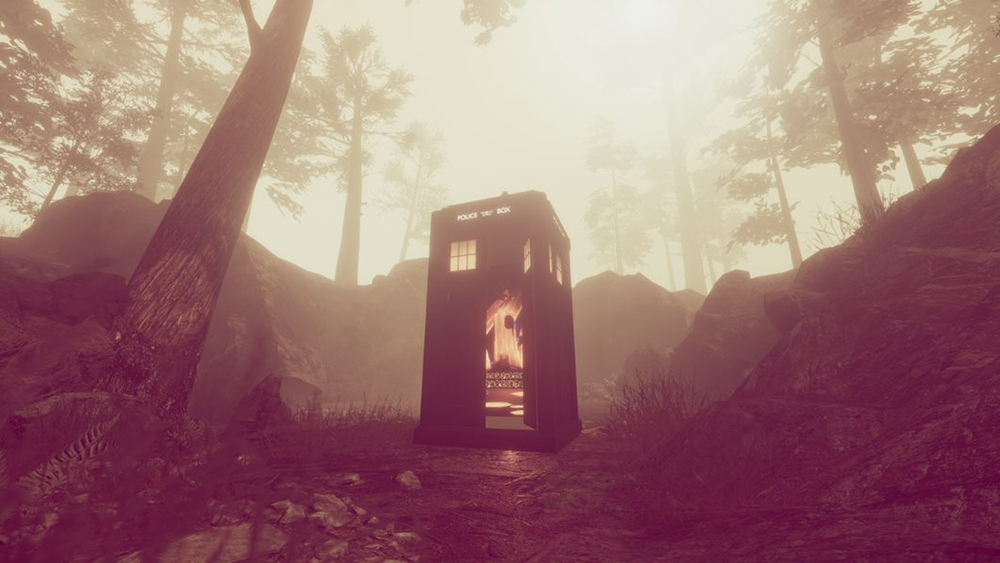 That’s exciting to hear! Thanks so much for taking the time to chat with us.

Doctor Who: The Edge of Time lands on planet Viveport tomorrow – as well as Viveport Infinity.

Not a member? Start a 14 day trial and prepare to go all *wibbly wobbly timey wimey*, along with hundreds of awesome VR apps and games without limits.