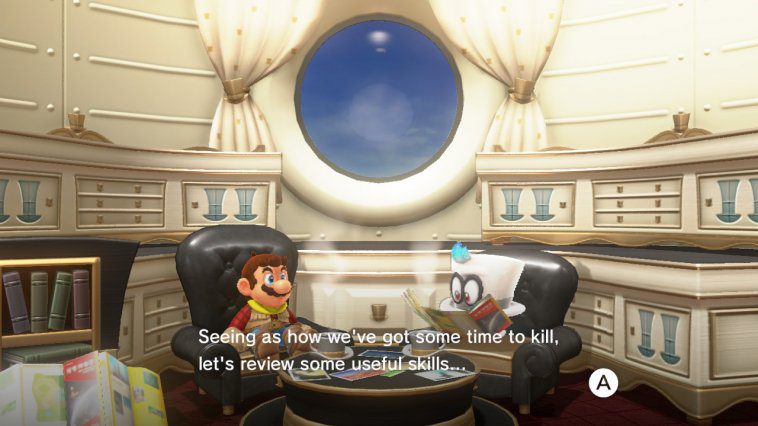 Super Mario Odyssey displays a clear understanding of what makes Mario tick, and is neck and neck for top billing among its esteemed predecessors. It surprises you with not just inventive mechanics, of which there are many, but with expertly tuned level design and moments of charismatic wit. It is comfortable in absurdity and wields this attitude to cut through the limitations of its otherwise straightforward structure and keep you smiling all along the way.

Above all else, Odyssey is refined. It generously doles out new worlds to explore, effortlessly cycling from one charming enemy and unique gameplay idea to the next. Its collection of open-world Kingdoms is varied and broad, and sometimes clearly inspired by Super Mario 64. Though it isn’t necessarily a groundbreaking game like its ancestor, which redefined expectations for 3D games at large, Odyssey outpaces it at every turn. Its environments are bigger and some of the most interesting ever seen in a Mario game–just wait until you lay eyes on Bowser’s elaborate fortress. All the extra space is invaluable, as the dense layouts of challenges and rewards justifies every building and landmass you encounter.

Your mission to rescue Princess Peach from Bowser–which actually takes a surprising turn for a change–is ultimately the hunt for Power Moons. These are Odyssey’s version of the series‘ star collectables, which are rewarded for feats big and small alike. Acquiring a moon can call upon your platforming skills, but it can also entail quirky activities like answering trivia questions from a charmingly simple-minded Sphinx, or exploring your surroundings for buried treasure with a doting pup (who will also play fetch if you know the trick). From boss battles to tossing your hat onto a peculiar piece of architecture, you can readily stumble into new moons–even 40 hours in–so long as you make sure to constantly shift your perspective on the world and engage with new possibilities as they come into view.

You’re guided through all of this by Cappy, Mario’s new sidekick: a living hat that can possess the minds of other creatures and put you in the driver’s seat. Cappy is content resting atop Mario’s head, but when you spot another character without a hat, friend or foe, you can simply throw him on their head to take over their body and put their unique skills to use. The selection of 52 capturable…things…spans the likes of lowly Goomba grunts and flying Bullet Bills to unexpected hits like a Christmas tree or a giant slab of neon meat. Shout out to the Easter Island-inspired statues that wear pink shades to reveal hidden platforms.

The opportunities introduced by possessing others isn’t just an easy source of laughs, but also works hand in hand with Odyssey’s ever-present challenges. Highlights include a caterpillar’s ability to stretch around bends like an accordion and the stout Pokio bird’s beak, which can be stuck into walls and used to fling you to hard-to-reach places. There’s usually always something in sight that you can possess and some way to exploit its traits. There are also plenty of exceptional set-piece possessions to look forward to, like a T-Rex or the tank you control in New Donk City. These emphasize just how impressive Cappy’s ability is in the context of a Mario game, and how Odyssey doesn’t want you to just work for your moons, but enjoy the process from the get-go.

The opportunities introduced by possessing others isn’t just an easy source of laughs, but also works hand in hand with Odyssey’s ever-present challenges.

Cappy’s usefulness extends beyond his mind-control capability: he can be thrown like a boomerang to retrieve coins or used as a trampoline to extend the range of your jumps. Some of his abilities can be triggered via motion controls or button presses, but the few that require you to flick your controller one way or the other are unwieldy when playing specifically in handheld mode. It’s a blemish, albeit a small one, as no critical objectives require complex manipulation of Cappy’s trajectory.

It’s also possible for a second player to join in and control Cappy as a full-fledged independent character capable of collecting coins, defeating small enemies, and remotely possessing targets while Mario does his thing. Given that two players have to share a single camera, this isn’t necessarily a great way to overcome difficult objectives, but it can be a great source of amusement.

By and large Cappy’s tricks are easy to use yet difficult to master in conjunction with Mario’s various flips, bounds, and hops. When used in harmony, Mario’s innate athleticism and Cappy’s support allow for intricate and efficient traversal. Combined with the game’s typically unusual tasks, and all the capturable enemies and objects, Odyssey very quickly becomes a game that’s easy to admire.

One of the most interesting facets of Odyssey is its seamless incorporation of 8-bit Super Mario Bros. gameplay. And because these sections are 2D, it stands to reason–in a game filled with loopy logic–that these occur on the surface of locations like lake bottoms and on the side of skyscrapers. Despite the stark difference in presentation, retro challenges fit smartly not only into the spaces you’re exploring, but within the general flow of gameplay. It’s also the basis for one of the game’s most elaborate and heartwarming scenes, especially if you’re a fan of Mario.

Once you’ve „finished“ the main quest–recovering about 20% of the game’s 800-plus moons–the push towards new outfits is a bonus given the amount of undiscovered opportunities that await.

Though you no longer wear different outfits to change Mario’s behavior (unless you count bodies you possess as outfits), you can dress up for fun by mixing and matching a large selection of hats and suits from Mario’s past. You can find costumes inspired by games like Mario Paint, NES Open Tournament Golf, and Yoshi’s Cookie. There are also an array of real-world styles like a bomber jacket and scuba gear, again, just for the fun of seeing Mario cosplay. There are only a handful of chances to use a costume to your advantage, usually to gain access to a locked room for an easy moon grab, but that doesn’t diminish their valuable contribution to keeping the long-haul feeling fresh, if only in superficial terms.

Each Kingdom offers access to two stores where you can pick up new threads. One takes special coins found in limited supply in each kingdom (another deviously hidden collectable to seek out) and another that takes generic coins found throughout the game. The general store unlocks costumes for purchase based on the number of moons you’ve collected, though many of them can also be unlocked immediately if you possess the right Amiibo. Once you’ve „finished“ the main quest–recovering about 20% of the game’s 800-plus moons–the push towards new outfits is a bonus given the amount of undiscovered opportunities that await, but one that can keep you steeped in powerful nostalgia.

As the end-game sets lofty moon-collection goals, it’s interesting to see the general store begin to sell unlimited amounts of moons at 100 coins a pop–at least buying moons doesn’t remove them from the world, leaving every challenge intact. This can help expedite the process of collecting hundreds of new moons, or to get that one or two more you need to unlock a new costume, but relying upon it isn’t efficient or recommended. At best, it’s helpful in a pinch, but it also runs the risk of undermining Odyssey’s top-class level design. It’s ultimately difficult to grow bored in the first place, however, as a significant number of new moons and hidden levels open up in each kingdom after the credits roll, ensuring that you aren’t staring at the same old locations with the same old set of eyes.

Once you reach Odyssey’s more significant moon demands, you’re rewarded with access to small but meaningful new areas that pack some of the biggest challenges in the game. In short bursts, Odyssey can be challenging throughout, but it’s generally forgiving in all cases. In the final stages, you are up against gauntlets that demand consistent precision; die, and you go back to the beginning. Though these chapters aren’t as significant as the rest of the game, it’s a welcome way to cap off Mario’s quest–though there’s a fair chance you still have hundreds moons left to find elsewhere.

Odyssey is sustained beyond its major milestones not only through colorful worlds and hidden challenges, but through the sheer joy of controlling Mario, who’s never felt more responsive or dynamic in action. Even with everything new that’s been introduced, Nintendo’s forward-thinking platformer retains the series‘ classic handcrafted appeal, which is even more impressive when you realize how densely packed each kingdom is. Mario’s latest outing is big, bold, and bursting with new ideas, and like Breath of the Wild, is another instance of Nintendo going above and beyond to redefine our expectations. It’s a shining example of refined creativity, and another crown jewel for Switch that is without equal.