To all the seasoned ship captains, cruising the stars and exploring the unknown in deep space, and the fresh ensigns looking to make a name for themselves… this is for you.

Star Ocean First Departure R, the HD remaster of the classic sci-fi RPG and first installment in the Star Ocean series, is coming to PlayStation 4 on December 5. On top of the enhanced graphics and multiple full voiceover options in this version, all of the characters feature new and updated looks, thanks to the prolific Star Ocean series character illustrator Katsumi Enami.

The Square Enix team sat down with Enami-san to talk about his work on the Star Ocean series, his approach to redesigning some of the series’ most beloved characters, and his background as an illustrator.

SE: How did you get your start as an illustrator and how did you begin working on the Star Ocean series?

KE: Originally, I worked at a game company designing graphics, mainly drawing backgrounds/environments. Despite being responsible for backgrounds, I wanted to draw characters and started posting my illustrations to a personal website I had created. At that point, I started to receive several requests to illustrate for “light novels” so I found the courage to leave my job to begin my career as an illustrator. At that time, the work I had done for “Baccano!” served as an impetus for receiving more jobs in the direction of character design. As for the Star Ocean series, it all began when I was given the opportunity to work on the character illustrations for “Star Ocean: The Last Hope.”

SE: What do you like most about creating artwork for the Star Ocean series?

KE: The game is set in an expansive world based in outer space where a variety of races and cultures exist. The range of physical appearances and outfits makes it appear as though each one is based on a completely different lore, even within the same title. I consider this — attempting to distinguish them from one another as I draw them — to be both a challenge and a pleasure. Particularly on “Star Ocean: The Last Hope,” the armor with a mechanical feel was something I had never had a chance to draw until then, so there was a bit of personal satisfaction for being able to accomplish drawing something of that nature.

KE: There was a moment of regret on my part after taking on “Star Ocean: The Last Hope” as it involved depicting a lot of Sci-Fi armor, and drawing mechanical objects was not my forte. That said, after finishing the illustrations, I felt that the detailed designs gave the mechanical objects a weightiness that gave the finished product a level of quality/texture that goes beyond my own design capabilities.

Compared to “Star Ocean: The Last Hope,” the characters’ outfits are simpler. It didn’t allow any room to cut corners with the help of dense details, so I considered the best way to dress the characters with their outfits in order to generate a good atmosphere.

As for differences in the production process, the work on “Star Ocean: The Last Hope” was relatively simple as illustrations were generated from available designs. “Star Ocean First Departure R” was similar in that I was drawing available designs, but there was an added element of giving them a sense of atmosphere that would make them relevant for this day and age.

KE: I believe key art and character illustrations were everything for many games from the past, where they focused on character images to help supplement and expand on the player’s imagination. For this title, I believe the opportunity was presented to me as the illustrator that worked on “Star Ocean: The Last Hope,” so illustrating in a way that generates the feeling that it is all part of the same series is something I tried to keep in mind during the process. I have not met the artist who worked on the original game, but I am one of many who played the game with those designs, so I’m truly grateful for the opportunity to illustrate them myself. 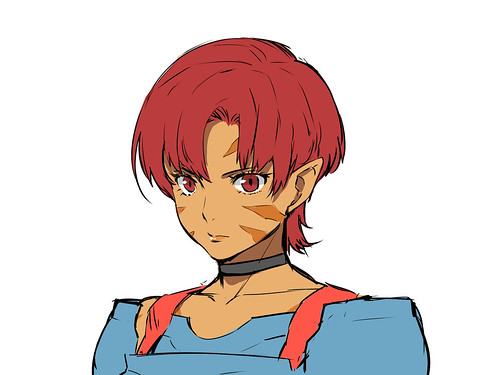 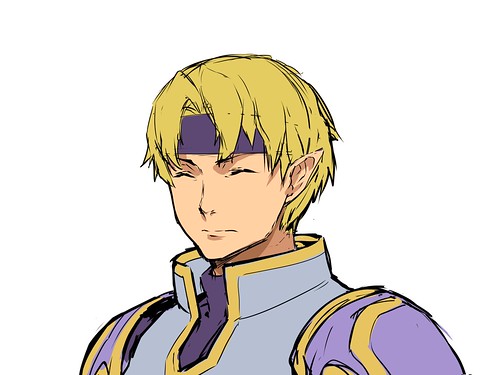 SE: Of the three new illustrations released thus far (Roddick, Millie, Dorne), which character was your favorite to draw and why?

KE: I would have to say Dorne. Regardless of the project, I always love supporting characters. There may be instances where I get over-enthusiastic and run wild with my imagination, giving them too much character. On the contrary, I find it challenging to create the hero or heroine, attempting to depict the handsomest or cutest characters. There have been many instances where they are overshadowed by the personality exuded by supporting characters, so I try to be mindful about avoiding such an outcome.

SE: Star Ocean as a series has had a fair number of guest artists contribute artwork and designs, including yourself and others like Akiman (Street Fighter) and Kou Yoshinari (Valkyrie Profile). What does it feel like to work on a series that has such a diverse body of aesthetic and design?

KE: Back when I was a student and I was playing games all the time, Akiman’s “Street Fighter” illustrations were an aspiration. Every time there is a new illustration for Star Ocean by Akiman, I feel a sense of happiness, knowing that I am working on the same series.

In regards to Kou Yoshinari, I remember looking at Valkyrie Profile and thinking how high level character designs had become. I felt concerned for my future as I started to set out on the same path, and remember his presence being quite stimulating.

I am extremely happy to be involved in a title with many wonderful designers; at the same time, the pressure is constant as it feels like a competitive field where my current self is being compared against such illustrators.

SE: Are there any other Star Ocean characters you would like to draw in an official capacity?

KE: There are many, so there would be no end if I were to draw everything, but perhaps Maria. Generally speaking, I prefer to draw characters that are pretty over cute, and cool over handsome. Given the fact that I have the opportunity to partake in a title with so many characters, if there is an opportunity to do so, I would love to take on all of them.

SE: Do you have any advice for young artists/illustrators?

KE: In this day and age, there are so many methods to showcase your artwork, so the competition is greater, making it harder to make a living out of this profession and have people remember your name. In order to make drawing your profession, I feel like success or failure depends on whether you have something to offer that aligns with someone’s objective when they happen to stumble upon your work while looking for an artist. I feel like these opportunities will increase by showcasing pieces that are polished and display the skills required for your target genre and industry. 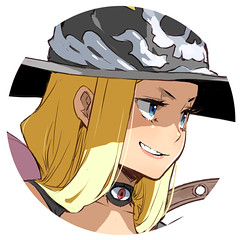