Croteam has been around for almost three decades, and to be honest, we have dedicated much of that time to Serious Sam. What was once a childhood dream – developing video games for a living – became a reality because of a shooter game with an arguably ridiculous but certainly catchy name.

Serious Sam is a product of our passion, and it has been a part of our lives, even beyond our working hours. Because of that love, we have always tried to share the Serious Sam experience with every shooter fan out there, and bringing the series to Xbox One is another significant step towards our end goal.

Whether you’re roaming the old tombs of Egypt in The First Encounter, exploring the pyramids of South Africa in The Second Encounter, or fighting giant flying alien spaceships in BFE, you are guaranteed to have endless unfiltered fun. Blowing up enemies never gets old, and from our experience, it’s a perfect way to relax after a hard day’s work. It allows you to let off some steam, whether alone or with friends. And finally, while we never promoted Serious Sam as a game that relies heavily on the story, the narrative is there, and the universe provides much to those that are looking to explore it.

We take immense pride in the fact that our game development mission hasn’t changed since day one. So, while every subsequent Serious Sam game is quite different from the previous one, with new enemies, environments, and game mechanics, they all share the same core and feeling you get while playing, and you immediately know that’s Serious Sam. This Collection allows us to provide players with a single package that captures everything special about our beloved series, and we can’t wait for everyone to get “Serious” on Xbox One, now that’s available now! 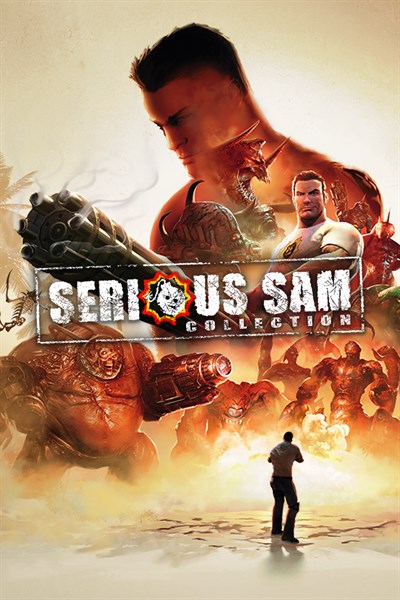 ☆☆☆☆☆
★★★★★
$29.99
Get it now
Xbox One X Enhanced
Step into the shoes of the legendary action hero Sam "Serious" Stone and experience one of the most explosive shooter game series of all time as you save the world from a merciless alien invasion. Visit the ruins of ancient Egypt and roam through the vivid arenas of South America fighting seemingly neverending hordes of enemies using an extremely destructive arsenal including shotguns, heavy lasers, rocket launchers, a huge cannon, and an iconic minigun. Tired of playing alone? Go to war against Mental's horde with up to 16 players online or 4 players in local co-op, blasting your way through the campaign or the stand-alone survival mode. Finally, put your skills to the test against other players in classic multiplayer modes including Deathmatch, Team Deathmatch, and more. Serious Sam Collection includes all content from Serious Sam HD: The First Encounter, Serious Sam HD: The Second Encounter and Serious Sam 3: BFE, including The Legend of the Beast and Jewel of the Nile expansions.

Related:
7 Tips to Help You Run Your Own Space Agency in Mars Horizon
Continue the Great Journey with Halo 4 Launching on PC and The Master Chief Collection Optimized for Xbox Series X|S
Cross-Platform Play Comes to Minecraft Dungeons