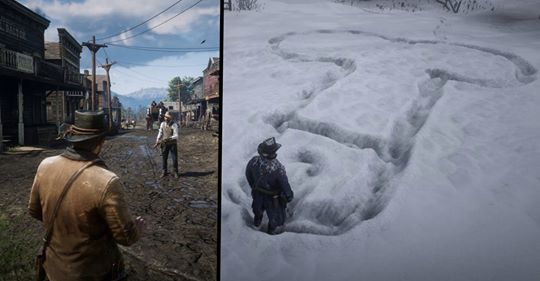 Unless you’ve been living under a rock, you’ve probably realised Red Dead Redemption II has been taking the world by storm.
Riding into town on a horse laden high with praise, gaming journalists the world over have been treating it as a rare and highly accomplished ‘masterpiece’.     .

Critics have praised the vast, detailed expanse of the game, which allows for an epic 100 hours of playing time; with visually stunning graphics which easily transport the player back to the end days of the lawless west.

The immersive quality of the game means players are quite happy to explore the gorgeously imagined wilderness at their leisure, in between moments of high octane action; herding cattle and even visiting the barbers (beards actually grow in real time in this game).

It also means players can draw knobs in the snow, which is what we only care about when it comes to these sort of games:

However, it is the realism which gaming writers have praised again and again; allowing them to feel a real connection with Arthur and those he interacts with.

To the tech artist who worked multiple late nights on the snow deformation technology, know that you’ve brought much joy to the world.