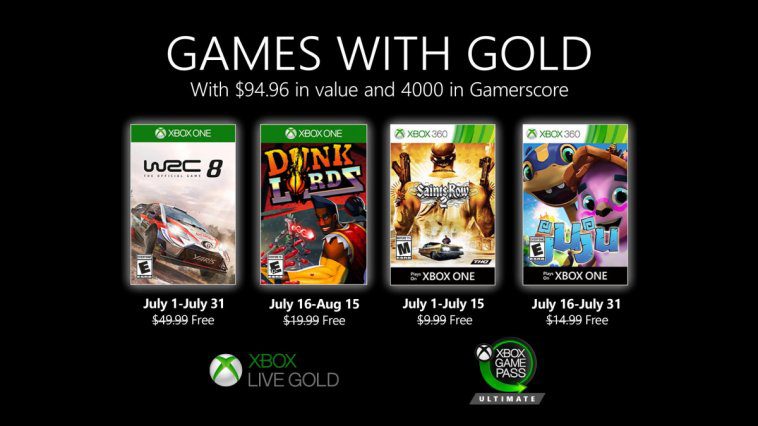 Today, we’re excited to reveal Games with Gold for July! On Xbox One, command your rally car to victory in extreme conditions in WRC 8 FIA World Rally Championship and rule the court with high-flying dunks and confidence-smashing rejections in Dunk Lords. On the Xbox 360, and Xbox One via Backward Compatibility, take back Stilwater in the classic Saints Row 2 and save the land from an ancient evil in the platformer, Juju.

WRC 8 FIA World Rally Championship
Play the most complete and authentic WRC simulation yet. Featuring a dynamic weather system with true-to-life physics, preparation and management before each stage are vital as you compete in the sun, rain, and snow. With 50 teams, 14 rallies, and over 100 stages, WRC 8 has the deepest content ever available in an off-road racing title.

Dunk Lords
You can ball… but can you fight? Find out in this fantastic two-on-two basketball beat ‘em up. Choose from 20 of the baddest ballers around, each with special attacks and insane abilities, and battle it out on 15 unique courts. Play powered-up pickup games with four friends or guide your young star, Slice, to the very top in Story Mode. Make sure not to miss out on this new-to-Xbox title!

Saints Row 2
Help the 3rd Street Saints take back their city in the second entry of the explosive, over-the-top franchise, where you can explore a massive open world sandbox by sea, land, or air. Fully customize your characters and complete over 40 story missions and numerous bonus quests to seek vengeance and restore the Saints as the rightful kings of Stilwater.

Juju
Get ready to jump to a new level of adventure! Embark on a dangerous and mystical journey with the shaman panda, Juju, and his lizard sidekick, Peya, to save both his father and world from an ancient evil. Bounce, run, chant, and battle enormous bosses in this beautifully animated and enjoyable platformer.

Read more about our Games with Gold program here and stay tuned to Xbox Wire for all the latest news on Xbox. Like we said before, if you’re an Xbox Game Pass Ultimate member, you have all the benefits of Xbox Live Gold, plus over 100 high-quality console and PC games that you want to play. New games are added all the time, so you’re never without something new to try when you’re looking to find your next favorite game. If you’re new, or if you’re an existing Xbox Live Gold and Xbox Game Pass for Console member, join or upgrade today for just $1.