Relive the cinematic sci-fi saga today with the Mass Effect Legendary Edition for Xbox One and Xbox Series X|S! Experience the legend of Commander Shepard and the crew of the SS Normandy as you travel across the galaxy in a heroic tale of survival, betrayal, and hope where your choices carry through to the final moments of the epic three-game saga.

Start your adventure in the original Mass Effect as you set off aboard the SS Normandy as you race against time to stop a madmen hell bent on destruction. Then in Mass Effect 2, recruit an elite team of the galaxy’s most skilled (and dangerous) characters as you lead a desperate assault. Finally, in Mass Effect 3, take back Earth from a nearly unstoppable foe on a seemingly impossible mission to save mankind.

Mass Effect Legendary Edition collects all the single-player content across all three games, including over 40 DLC, promo weapons, armors, and packs, all remastered and optimized for 4K Ultra HD with enhanced performance, visuals, and graphics in HDR.

This also includes enhanced models, shaders, FX, lighting, and depth of field plus full-resolution audio. In addition, you can choose to play in “Favor Quality” for increased resolution or “Favor Framerate” to boost your FPS on Xbox Series X|S. And it’s not just visuals that have been enhanced. Enjoy improved aiming and weapons balance, SFX, input/controls, squad behavior, cover behavior, and gameplay cameras across all three games.

Best of all, you can create and customize your own Commander Shepard with an advanced character creator that includes improved hair, makeup, eye color, and skin tones helping you build out a personalized arsenal as you command your elite team across the Mass Effect universe.

Mass Effect Legendary Edition is available today for Xbox One and as an Optimized for Xbox Series X|S title on the Xbox Store. 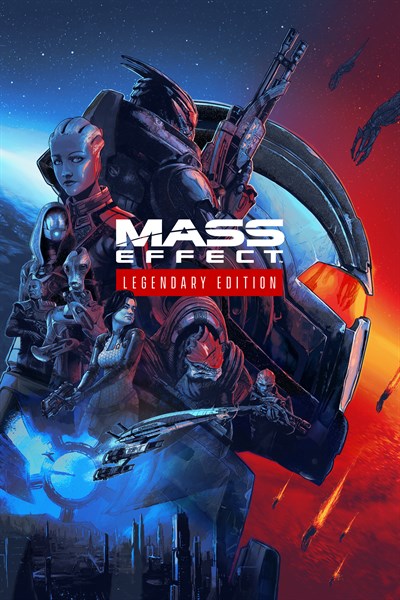 ☆☆☆☆☆ 267
★★★★★
$59.99 $53.99
Get it now
One person is all that stands between humanity and the greatest threat it’s ever faced. Relive the legend of Commander Shepard in the highly acclaimed Mass Effect trilogy with the Mass Effect™ Legendary Edition. Includes single-player base content and over 40 DLC from Mass Effect, Mass Effect 2, and Mass Effect 3 games, including promo weapons, armors, and packs – remastered and optimized for 4K Ultra HD. Experience an amazingly rich and detailed universe where your decisions have profound consequences on the action and the outcome. RELIVE THE CINEMATIC SAGA: Heart-pounding action meets gripping interactive storytelling where you decide how your unique story unfolds. • Three Games – One Launcher: Play through the single-player base content and over 40 DLC from all three games, including promo weapons, armors, and packs. • Remastered for a New Generation: Experience the trilogy in 4K Ultra HD with enhanced performance, visuals, and graphics, all available in HDR. • Visual Improvements on All Three Games: Updates include enhanced models, shaders, FX, lighting, and depth of field plus full-resolution audio. EXPERIENCE THE LEGEND OF SHEPARD: Create and customize your own character, from appearance and skills to a personalized arsenal then lead your elite recon squad across a galaxy in turmoil. • New Shepard Customizations: With improved hair, makeup, eye color and skin tones you can create your Shepard in a unified character creator with all options available across the full trilogy, or choose to play as the iconic Femshep from Mass Effect 3 now available in all titles. • Gameplay Enhancements for the First Mass Effect™ Game: Enjoy improved aiming and weapons balance, SFX, input/controls, squad behavior, cover behavior, and gameplay cameras. REFLECT ON YOUR CHOICES: Your choices seamlessly travel from one game to the next. Each decision you make will control the outcome of every mission, every relationship, every battle – and even the fate of the galaxy itself. • Performance Mode Options: Choose between "Favor Quality" for increased resolution or "Favor Framerate" to boost your FPS on consoles. INCLUDED CONTENT: Mass Effect™ Legendary Edition includes single-player base content for all three titles (Mass Effect, Mass Effect 2 and Mass Effect 3), your favorite single-player story DLC, promo weapons, armors, and packs: DLC: • Bring Down the Sky • Genesis • Zaeed – The Price of Revenge • Kasumi – Stolen Memory • Lair of the Shadow Broker • Firewalker Pack • Overlord • Normandy Crash Site • Arrival • Genesis 2 • From Ashes • Mass Effect 3: Extended Cut • Leviathan • Omega • Citadel • Equalizer Pack • Aegis Pack • Firepower Pack • Cerberus Weapons and Armor • Arc Projector • ME2 Alternate Appearance Pack 1 • ME2 Alternate Appearance Pack 2 • ME3 Alternate Appearance Pack 1 • Firefight Pack • Groundside Resistance Pack • Recon Operations Pack • Collector's Weapon and Armor • Terminus Weapon and Armor • M-21 Incisor • Blood Dragon Armor • Inferno Armor • Recon Hood • Sentry Interface • Umbra Visor • N7 Warfare Gear • AT-12 Raider • Chakram Launcher • M-55 Argus • M-90 Indra • Reckoner Knight Armor • N7 Collector's Edition Pack CONDITIONS AND RESTRICTIONS APPLY. SEE WWW.EA.COM/LEGAL FOR DETAILS.