Robot-builder extraordinaire Clément Didier is ushering in the era of our cybernetic overlords. Future generations will remember him as the creator of robots constructed from cardboard and conductive paint which are so easy to replicate that a robot could do it. Welcome to the singularity.

To assemble the robot, Clément made use of a Pi Cap board, a motor driver, and most importantly, a tube of Bare Conductive Electric Paint. He painted the control interface onto the cardboard surface of the robot, allowing a human, replicant, or superior robot to direct its movements simply by touching the paint. 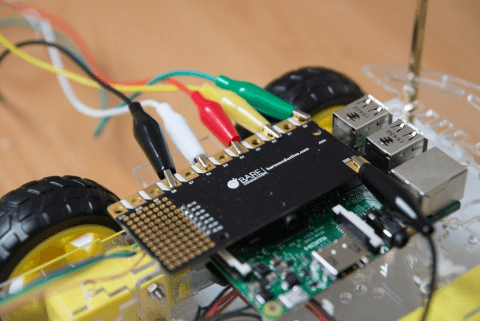 Two battery packs provide power to the Raspberry Pi, and to the four independently driven motors. Software, written in Python, allows the robot to respond to inputs from the conductive paint. The motors drive wheels attached to a plastic chassis, moving and turning the robot at the touch of a square of black paint.

Clément used masking tape and a paintbrush to create the control buttons. For a human, this is obviously a fiddly process which relies on the blocking properties of the masking tape and a steady hand. For a robot, however, the process would be a simple, freehand one, resulting in neatly painted circuits on every single one of countless robotic minions. Cybernetic domination is at (metallic) hand. 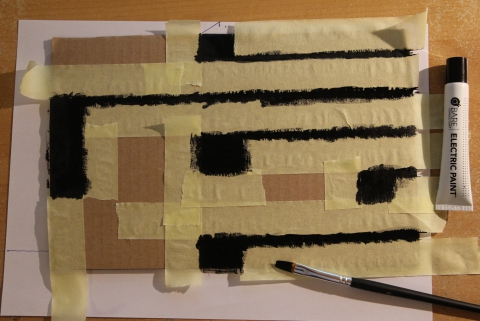 One fiddly job for a human, one easy task for robotkind

The instructions and code for Clément’s build can be found here.

Here at Pi Towers, we love seeing the high-tech Raspberry Pi integrated so successfully with low-tech components. In addition to conductive paint, we’ve seen cardboard laptops, toilet roll robots, fruit drum kits, chocolate box robots, and hamster-wheel-triggered cameras. Have you integrated low-tech elements into your projects (and potentially accelerated the robot apocalypse in the process)? Tell us about it in the comments!