I’m thrilled to give you a tour of an exciting new feature available in today’s free SnowRunner update: Photo Mode! Along with this update, Season 6: Haul & Hustle is now available as part of the Year 2 Pass on Xbox One, adding a massive new region with two new maps and two vehicles!

Ever since SnowRunner launched, we’ve seen countless stunning screenshots from the community, so a Photo Mode was on our radar from the get-go. Now that it’s here, players have a powerful new tool to take unforgettable shots, and we can’t wait to see them. First, I’ll briefly talk you through the settings and how they work, and then we’ll look at six tasty screens and how you can get the same effect.

Time and weather are self-explanatory. Some crisp morning snowfall or a light afternoon drizzle can really help set the mood.

If you feel like our friend the driver is getting in the way, you can hurl him into the void by switching him “Off.” Don’t worry, we don’t think he remembers. Truck lights can also be switched on and off.

Next, we have the fancy photography stuff. Exposure is essentially brightness. Contrast, on the other hand, while it might seem like brightness, is actually the visual ratio between tones, or the separation between shadows and highlights. It’s a powerful setting that’s fun to play around with to get it just right.

Hue changes the entire color scheme of your picture, and this is fun because of the range and intensity of the changes. Want to turn an autumn forest into a bright green spring forest, or an alien purple forest? No problem! Saturation determines the intensity of the colors in your image. You can crank it up to see the driver’s face go bright red, which is good fun. Again, he doesn’t mind (probably).

Color Grading and Color Grading Intensity are a number of premade settings included in the photo mode. There are 19, so there’s a lot to play around with there. Vignette gives your borders a shadow, while Film Grain gives the image that cinematic grainy quality.

Besides Field of View (the wideness of your view), the remaining settings change blur, its intensity (Aperture), and location (Focus Point and Depth of Field Span).

Now that you know how the Photo Mode works, let’s see the tool out in action! We give each screenshot a fitting name and then provide a short guide on how to get similar results.

Turn the peaceful aurora borealis into an apocalyptic firestorm with “Wrong Rainbow.” Just play around with the hue until you get your desired result, then crank the saturation. To get a good contrast between the dark and the light, we suggest dipping the exposure just a bit.

For any sweeping vista, “Crunchy Mint Mountain” will get you good results. You’ll want to slide the aperture all the way down to 0%, along with film grain, removing all blur and giving you a super clean, crunchy look. Nudge the exposure a tad to the right and you’ll have your landscape looking minty fresh.

For this one, you’ll need to flip your car, which isn’t part of the photo mode, so get a crane or just flip it the old fashioned way. To get the same look, switch over to the right time of day (“Night 2”), and pump up the contrast and saturation until Mr. Driver’s face starts to become a nice shade of purple grape. He’s fine, really. Look into his eyes and tell me he’s not having a good time.

If you hate colors, “Nuclear Winter” is for you. Find some sad, angry buildings, lower your hue to 0, and you’ve got yourself a postcard.

This screenshot was less a matter of tweaking colors than it was of capturing the right moment and angle, then focusing the image on the right parts. A lot of the impact of this picture comes from the sense of movement thanks to the dirt raised by the tires and the streaking raindrops. The distant mountain is a blur, making it almost symbolic, while also shifting focus to the vehicle. The sense of adventure is palpable!

We hope this guide and showcase helps you capture your own favorite moments in SnowRunner. Photo Mode is available now in the free update, alongside Season 6: Haul & Hustle, bringing the new Maine, USA, region and two new vehicles. Season 6 is available as part of the Year 2 Pass, giving access to four seasons of massive content drops. To celebrate the photo mode launch, submit your screenshots to our photo contest using #SnowRunnerVP on Twitter and Instagram!

See you in the snow! 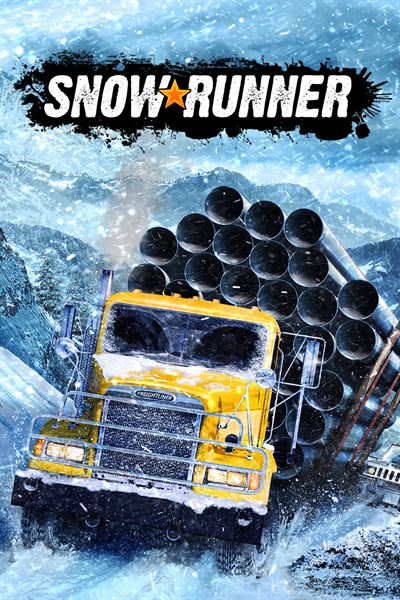 ☆☆☆☆☆ 383
★★★★★
Get it now
Xbox One X Enhanced
Xbox Game Pass
Get ready for the next-generation off-road experience! SnowRunner puts you in the driver’s seat of powerful vehicles as you conquer extreme open environments with the most advanced terrain simulation ever. Drive 40 vehicles from brands such as Ford, Chevrolet, and Freightliner as you leave your mark on an untamed open world. Overcome mud, torrential waters, snow, and frozen lakes while taking on perilous contracts and missions. Expand and customize your fleet with many upgrades and accessories including an exhaust snorkel for heavy waters or chain tires to battle the snow. Ride solo or with other players in 4-player co-operative!
• Face extreme environments in a highly advanced physics engine
• 40 unique vehicles to unlock, upgrade, and customize
• Complete dozens of challenging missions across an interconnected world
• Go solo or play with other players in 4-player co-op

☆☆☆☆☆ 37
★★★★★
$24.99 $22.49
Get it now
Save money on content for this game by purchasing the Year 2 Pass. Content can be downloaded from the store or in-game upon release. Expand your SnowRunner experience with the Year 2 Pass and gain access to four phases of new content released in the future, with new vehicles, new maps, add-ons and more! You will also get instant access to the exclusive Burning Bright Vinyl Wrap Pack, adding four exclusive skins for the Azov 5319, Azov 73210, YAR 87 and Voron AE-4380! Already available:
• TATRA Dual Pack
• Season 5: Build & Dispatch
• Season 6: Haul & Hustle Coming soon:
• Season 7: Compete & Conquer
• Season 8: New Expansion