Clover Bite, Team Malignant and Akupara Games released Grime to PC in August, 2021 and we were fortunate to receive tons of positive feedback and critical acclaim. IGN gave the game nine out of ten, it was reviewed as “Mostly Positive” on Steam, and players all around the globe were joining the Grime Discord to let us know how much they loved the precise combat and surreal visuals. But every nine out of ten leaves something to be improved upon, “Mostly Positive” still meant we had some negative reviews, and for all the players who joined the Discord because Grime was a new favorite of theirs, we also saw players join to explain what they didn’t enjoy about the game.

This is the story of those players.

I’m Buddy, the Marketing Lead for Akupara Games, and today I want to talk a little about how the developers behind Grime, most notably its game director, Yarden Weissbrot, responded to the negative feedback they received from players. What were the kinds of complaints that players had? How did they craft solutions to fix them? And most importantly, how does the new content in Grime: Colors of Rot address some of those concerns with today’s release?

One of the first tensions we saw when releasing Grime was the desire players had to fast travel between points in the game. Grime is a 2.5D hybrid of genres, combining elements of metroidvania gameplay, like unlocking different movement types that allow for interesting new areas when players backtrack, and elements of soulslike play, with players needing to master the tight melee combat of dodging and parrying in order to progress through the game to completion. Those two genres, metroidvania and soulslike, have a tension between them that Clover Bite needed to strike a balance between.

In a metroidvania, travel is an expected part of the game. As you progress further and defeat bosses, you’ll unlock new ways to traverse the map. In Grime, abilities like the double jump, pull and air-dash allow players to access different parts of the map in different ways. Maybe there’s a secret, hidden passage that leads to a whole new area only accessible to players who can make a long series of double jumps. These mechanics give players an expectation that they should go back to locations they’ve already cleared to see if they can find new nooks and crannies to explore. And a lot of the time, that exploration means running from point A to point B, investigating something when it catches your eye.

In a soulslike, however, the expectation has been set by the best games in the genre that you’ll be able to fast travel between all points you’ve saved at. Elden Ring blew the doors down for the soulslike genre in 2022, for instance, and players can teleport between any sites of grace they’ve ever encountered. Grime has similar checkpoints to sites of grace called surrogates, a crystalline pillar where the vessel that players pilot can grow more powerful. The game also includes its own fast travel system that unlocks later in the game, though, with far fewer nodes than something like Elden Ring. Why is that?

For a metroidvania player, an overreliance on fast travel removes the feeling of an expansive world that unlocks and opens up over time. If fast travel points are sparse, it helps the player backtrack over spots they’ve been to before and discover all those little nooks and crannies they might have otherwise missed! But for a soulslike player, it’s intensely frustrating to be forced to run all the way back to an area you’ve already cleared in order to see if you can get closer to completion. What is exciting for one type of player ends up being frustrating for another. And the solution ended up being a matter of degrees rather than a system-wide redesign of the game. Yarden doubled the number of fast travel locations throughout the game to ensure that players had a good mix between backtracking exploration and convenient transportation. The system was there, the numbers just needed a tweak.

But another big complaint also existed in Grime that didn’t have a tweakable system attached to it. Many players questioned why armor in the game was purely cosmetic and didn’t confer any kind of ability or stat bonuses to the player?

Yarden’s fear when initially designing Grime was that players would choose stats over visuals. Many players, especially players in the soulslike genre, are famous for disregarding the appearance of their character in order to hone in the most minor stat upgrades they can possibly get. Youtubers like ProZD and Dan Olson have each made videos on the topic, one a quick, irreverent skit and the other an academic deep-dive into the sociological phenomenon of min-maxing. By removing all stats from items in Grime, Yarden made sure that armor was something players could only use to express themselves.

Interestingly, though, many players objected to the system because they liked the process of min-maxing their character. Without stats, picking up a piece of armor doesn’t have the same excitement to it and for these players, every new piece of armor was a little disappointment, something to disregard because it didn’t key into how they wanted to optimize their character. Fair enough!

The solution here was far more technical than any other change made to the game because it required the creation of a brand new solution. And borrowing the term “transmogrification” from other RPGs like World of Warcraft, that system was added to Grime through a breakthrough by the game’s technical director, Theodore Kovalev. By allowing players to customize their appearance regardless of the stats of their items, they can choose the items that look the best and pair the stats that compliment a player’s build the most — an elegant solution to a simple problem. In Grime: Colors of Rot, the free DLC content coming with the game’s release on December 15th, that feedback has been taken to heart as well. With new traversal abilities like sprint and hover as well as brand new items to equip, the team at Clover Bite have outdone themselves in their quest to address all the feedback they’ve gotten from Grime’s community.  We hope you enjoy the journey! 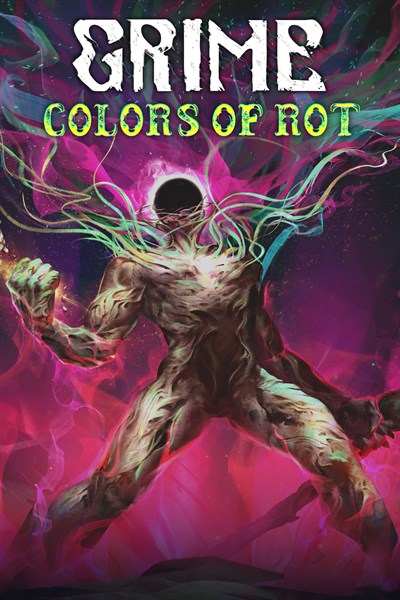 ☆☆☆☆☆1
★★★★★
Destroy… Absorb… Grow… GRIME is a methodical and unforgiving 2.5D soulslike metroidvania in which you crush your foes with living weapons that mutate form and function. Parry attacks to absorb prey, acquire their skills and empower your vessel in a world of anatomical horror and intrigue.