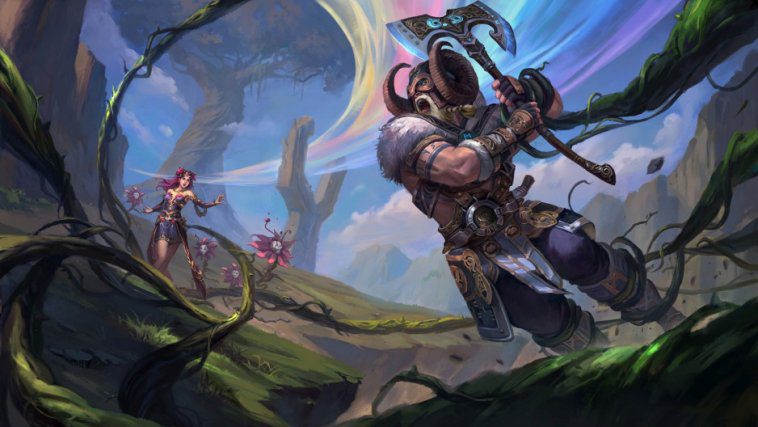 Hurl axes and traverse the mystical Bifrost Bridge as the legendary viking God Heimdallr, The Vigilant, in Smite’s newest Update available now on Xbox One.

At the edge of Asgard and Midgard there stands a god with unmatched senses. From this vantage point he sees and hears of important matters from all the nine realms. Heimdallr has built great wisdom from this power, and he lives in solitude to stay dedicated to his cause: prevent any trespassers from entering Asgard.

Persephone, Queen of the Underworld, seeks to manipulate Yggdrasil itself in order to carry out her plans. She strived for years to set this plan into motion, providing an elaborate distraction to keep Olympus busy. A distraction that Heimdallr will see right through. As her journey reaches an end she sees Heimdallr standing tall at his post. He will stop at nothing to protect Yggdrasil, and the final battle of the Underworld Odyssey will soon take place.

Heimdallr’s primary themes are vision and the use of legendary items. Heimdallr has multiple abilities that relate to in-game vision advantages and all of his abilities make use of legendary items from Norse mythology. For example Heimdallr’s Piercing Sight ability summons his legendary sword, Hofuð, in the sky and its shining light reveals enemies that are close to Heimdallr even if they are behind walls. After a few seconds the sword comes crashing down to deal damage to enemies.

This wasn’t quite enough for us to tie things together and build a full God kit in Smite, so we extended this theme to that of a precise ranged character. Someone with skills such as Heimdallr would certainly have perfect aim, which led us to the Hunter Class. We’ve taken Heimdallr’s unique skills and vast mythology to inspire a fresh take on Hunters. Wearing heavier armor and hurling hefty axes, he brings strength to a traditionally agile role.

Hunters often have a ranged damage ability, a self buff, and some form of mobility in Smite. We specifically tried to avoid that combination with Heimdallr, the first ever hunter in Smite to have a unique ranged basic attack chain. These attacks rotate between ranged cleaves vs higher damage single target burst.

Heimdallr can also gain vision of areas of the map in ways other than wards, as many as 3 of of his abilities can grant him vision bonuses, and some can even see stealthed enemies. Finally, Heimdallr has a movement ability that allows him to teleport to anywhere on the map via the mythical Bifrost Bridge. This ability requires strategic planning and functions unlike any other ability in Smite.

Also, in this update, our marquee event Odyssey: Underworld is coming to a close. Weekly drops are heading your way with some amazing content including Yemoja’s first skin — Toxic Current  —  and The Mighty Storm Jormungandr. Don’t forget: This is your last chance to earn the fan favorite Thanatoast Thanatos skin as well as purchase the ultimate Odyssey reward – Tier 5 Stellar Demise Baron Samedi.

Last but certainly not least, we’re so excited to announce that full keyboard and mouse support is coming to Smite on Xbox One! In our newest update players will be able to switch their control scheme from gamepad to keyboard and mouse at the click of a button. Choose your weapon of choice before you go into battle and play how you want to! Crossplay matchmaking has also been updated to match players based on their input method regardless of platform.

Thanks so much for checking out what’s new in our last Update of Season 6! We hope you enjoyed this incredible year as much as we did. We’ll see you on the Battleground now, and in Season 7!

Related:
The Valkyrie Rides into Battle in Black Desert on Xbox One
Counting down the 50 Greatest Sea of Thieves moments from 2019
Free Play Days – Fallout 76, Soulcalibur VI, and DayZ