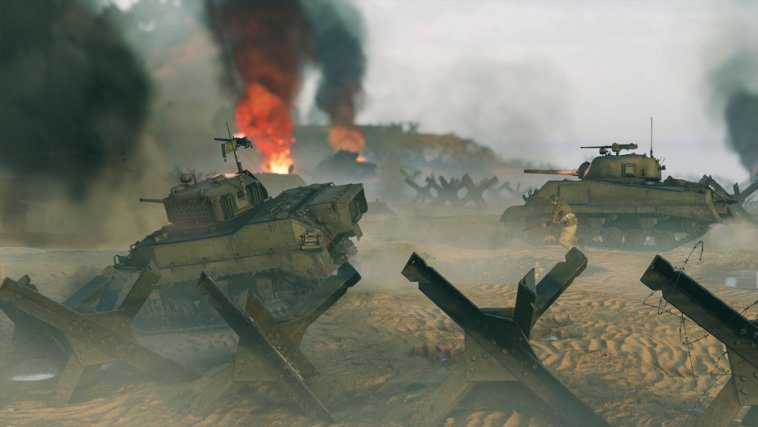 We at Darkflow Software are thrilled to announce that Enlisted has completed closed beta testing via Xbox Game Preview program and is now available for everyone to play for free! Grab your rifles and machine guns, jump into your tanks and planes, put your helmets on and start fighting online on Xbox Series X|S!

Enlisted is a World War II online shooter with a different approach compared to other games you might have tried that share a similar setting. Historical authenticity is very important to us, which means we put a lot of effort into recreating all the gear and vehicles you can use, keeping their looks and battle roles as close to the originals as possible. This includes paying a lot of attention to even minor details of the equipment being used, as well as their historical availability. For one example, you won’t see a Tiger tank in our Battle of Moscow campaign, because at that time in 1941, it wasn’t in service with the German army yet. You’ll still have the chance to try more advanced gear in the Invasion of Normandy campaign that took place in 1944.

That being said, we also want to avoid the tedium that comes with more simulation-type games, like walking for minutes at a time without any combat: Enlisted is easy to get into and fast paced, has a focus on immersive gunplay with a short time-to-kill and aims to keep gameplay forgiving. On the gameplay side, we strive for a golden middle ground between hardcore and more casual shooters; one that you can both spend hours in at a time, be that alone or in a dedicated clan, or in a more relaxed setting with a couple of friends after work – and still play a major role on the battlefield.

With Enlisted, we put you right into the middle of a massive clash of infantry with 100+ soldiers on the battlefield at once, playable ground vehicles and aircraft. In part, we want to achieve the goals outlined above with our main game mode “Squads”, which sees you and others play as a squad leader of AI-controlled subordinates that will follow you and your orders – be that as in an infantry fire team, as a tank crew, or an aircraft. You can freely switch between your active soldiers at any time to react to combat situations on the fly and if you are killed, you can continue the fight by assuming control of one of your surviving squad members. This allows you to retaliate immediately, without having to wait for a respawn first.  For those of you that are wary of AI soldiers in your session, don’t worry: While we want you to give this mode a try, Enlisted also features more traditional modes.

It’s also obviously cool to try various distinctive roles during one battle, like leading the charge as a tank, providing support as a mortar squad or battlefield engineer constructing gun positions, cleansing buildings with flamethrowers or raining fire from above in a dive bomber. Enlisted currently has 12 distinct infantry classes and dozens of ground and air vehicles to unlock and upgrade.

Another major difference between Enlisted and other games is our approach to maps, locations and game content. In our game, everything is divided into so-called Campaigns, of which we currently have the Battle of Moscow and Invasion of Normandy. Each campaign offers unique locations, soldiers, uniforms, equipment, weapons, vehicles, aircraft and more. This has a massive influence on gameplay, making each Campaign its own experience not only due to the significant differences in equipment, but also due to the goals and strategic situations the historical combatants faced at the time.  Two more campaigns, the Battle for Berlin and the Battle for Tunisia, are already announced and more are in the works. We envision Enlisted as an ever evolving online game, which will see major content updates regularly for years to come, offering you new experiences at a constant rate.

Especially now where the game is still very much evolving, we are always looking for feedback from our players. Hundreds of improvements have already been made during closed beta thanks to direct feedback from our Xbox Series X|S players, and we could not be more grateful. If you are a fan of World War II shooters, please be sure to check out the game for free and leave your comments on our forums and social media. We’ll continue to make the game better, and we’ll do it together with all of you.

See you in battle!

☆☆☆☆☆ 343
★★★★★
Get it now
Enlisted is a squad-based first person MMO shooter covering key battles from World War II. The game carefully recreates weapons, military vehicles and the atmosphere of that era, while demonstrating really massive clashes of numerous soldiers, tanks and aircraft with artillery and naval support. At first, players will be able to fight in the “Battle for Moscow” campaign that recreates the heavy clashes between German and Soviet troops in the outskirts of the Russian capital and the “Normandy Invasion” covering D-Day landing and following battles. There are more campaigns already in development including the “Battle for Berlin” and others. Features: – Epic battles that look as massive as the historical battles, like the Normandy Invasion. Players assume the roles of an infantry squad or a tank crew commander or an aircraft pilot. – High input of each player in the team victory: despite the massiveness of the battles, the result is significantly defined by the performance of each player. – 10+ distinctive squad classes like assault, sniper, heavy gun, mortar, flamethrower, anti-tank, engineer, radio specialists, tank crews, aircraft pilots and others. – Hundreds of weapons, ground vehicles and aircraft types. Each of them is based on a real model used in the specific historical campaign of World War II. – A player can customize and train squads according to their individual playing style, unlock perks and upgrades as long as this does not contradict the historical accuracy principle.

Related:
What The Dub?! is Bringing Bad Movie Night to an Xbox Near You
Borderlands 3 Director’s Cut Add-on Available Today
Become a Bounty Hunter in a Hip Hop Infused Wild West with Luckslinger