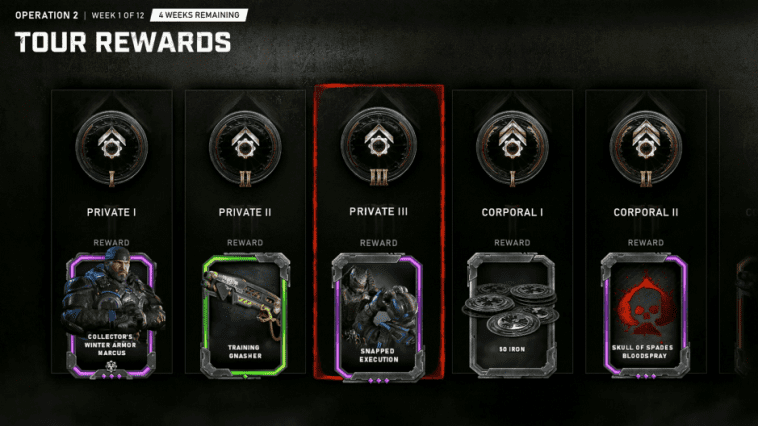 Lizzie Carmine and Damon Baird join the fight, facing off against Jermad and the original Locust Drone in Gears 5 multiplayer. In Arcade, each character is bolstered by a passive ability and a weapon selection tree designed to suit a new fighting style. In both Horde and Escape, each Hero possesses a unique ultimate ability. Lizzie can summon the mighty Silverback and Baird can deploy a fearsome DR-1 bodyguard to protect him when the going gets tough. Each Hero or Villain can be earned by playing or can be purchased via the in-game store for 500 Iron.

For those looking to pick up all of the critical content right away, we also have the Operation 2: Free for All bundle. It includes all four new characters, the complete Eclipse weapon set, 1000 Iron and 30 days of Boost, all for $19.99. Check in out here.

Free for All makes a highly-anticipated return to Versus in Gears 5 as the biggest mode in Gears history. Fourteen players choose their favorite COG or Swarm character, and fight in an all-out brawl, to be the first one to 30 kills.

The second new mode, Arcade Blitz is a fast-paced, objective mode for the Arcade playlist. Players must stay within the capture circle to earn points, creating tense and chaotic battles. Arcade rules apply, so passive abilities and weapon upgrade trees are crucial in driving your team to victory.

The last mode, 2v2 Gnashers is guaranteed to make the fight personal, as two duos must work together to land shots and cover their teammates. This mode will be playable on Boxes and Foundation Mid, with more maps coming in future Operations.

Set in an old coliseum dedicated to the founding members of the COG, Allfathers’ Arena is now destined to once again be filled with the sound of battle! Available in Horde and Versus, this unique arena is features dynamic cover areas – the Room, the Field and the Hall. Each area has three different cover configurations, resulting in a total of 27 possible map layouts, each a new way to fight. Be prepared to learn fast if you want to survive the Arena.

Lift is returning to Gears 5 with improved lighting and texture quality, as well as a few new changes. The best of Lift and Lift Apex have been combined to make the perfect version of the map. The most notable improvements include the popular “Top Rocks” area’s return to the battlefield and changes to the control room shutters, which now start closed and can be freely controlled by players.

The Tour of Duty in Operation 2: Free for All features more than 200 exclusive earnable items that can be unlocked through completing daily Objectives and season long Medals. These items include character skins, weapon skins, Iron, expressions, executions and more.

Lizzie Carmine
A driver for the COG and member of the iconic Carmine military family, Lizzie is a total badass that never backs down from a fight.

Damon Baird
An original member of Delta Squad, this sarcastic engineer brings humor and support to the battlefield.

Locust Drone
Born and bred for combat, the Locust Drone emerges once more to enter the fight.

Jermad
This Locust sniper hails from the ranks of RAAM’s vicious Blooded Vanguard where he played a key role in the defeat of Sraak.

Operation 2: Free for All will be available to download later today at 10 a.m. PT/1 p.m. ET and playable at 1 p.m. PT/4 p.m. as a free update for all Gears 5 players. For more information on Gears 5 and the Gears franchise, stay tuned to Xbox Wire or follow Gears on Twitter @gearsofwar.