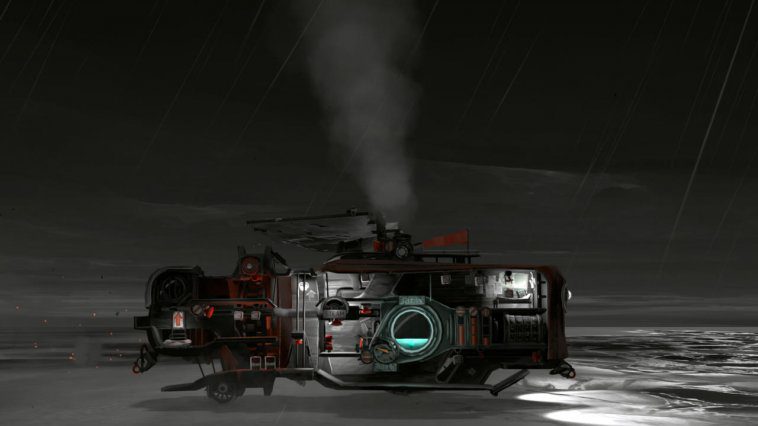 FAR: Lone Sails, the debut title of Swiss developer Okomotive, opens with your character–an unnamed, ambiguous figure in red–wordlessly paying their final respects at a grave behind their home. As you guide them from left to right, through their residence and out the front door, you leave it behind and set out on an unclear journey. The world is tinged grey, broken, abandoned. You quickly arrive at the vehicle that serves as your dwelling for the rest of the trek, a landbound ship that uses petrol, steam, wind, and its giant wheels and sails to propel itself forward. You henceforth pilot the ship in a straight line away from your home, unsure of the specifics of your destination or purpose–it seems like you’re simply trying to go as far as possible.

Lone Sails is a 2D puzzle game in which there are no enemies, few challenges, and a purposefully vague narrative. These are all ideas we’ve seen attached to plenty of other indie platform-puzzle games, and in the opening few minutes described above it all feels very familiar. But it does not take long for Lone Sails to emerge with its own distinct voice and identity, and that’s thanks to the ship you’re piloting.

You’ll spend at least half your time running around inside your ship–presented from a bisected viewpoint whenever you enter it–pressing the big red buttons that operate its various functions. You’ll need to make sure that you’ve got fuel in the tank before firing the engine, meaning you’ll often have to stop and collect canisters of it from outside during your journey (at no point in my playthrough did I come even remotely close to running out). Steam will build up if the engine runs for long enough, and pressing the associated button releases a valve and gives you a brief speed boost. Aside from these functions, most parts of your ship don’t require frequent attention. You have a hose for fires and a repair torch, but they’re generally only needed during or following set-pieces; a brake that brings you to an immediate halt; and, following an early upgrade, a set of sails that you can coast with if the wind permits.

There are plenty of sections where the ship must be brought to a halt so that you can leave and fiddle around outside to clear a path or get yourself moving again. These are Lone Sail’s puzzles, and they’re generally quite gentle, usually not involving much more than figuring out the right order to hit a series of red buttons or attaching your ship’s winch to something. But even if they’re not challenging, these set-pieces are usually delightful, either in how much your meddling changes the environment around you, or how the world’s vistas stretch out behind you, or because they end with your ship getting a neat upgrade. FAR: Lone Sails is consistently engaging, with a tactile pleasure to pulling boxes, pressing buttons, and jumping around as needed.

But there are also long stretches where you’ll likely find yourself doing nothing–the wind is carrying your ship, everything is organized below deck, and there’s not much to do but sit on top and admire the view while listening to the soft orchestral soundtrack that kicks in during these quieter scenes. In these moments, as you take a moment to appreciate Lone Sail’s beauty, the storytelling feels especially confident and focused. The world is beautiful, even though it’s vaguely post-apocalyptic, with much of the landscape made up of a drained sea-bed and abandoned buildings. There are little hints at what may have happened to the world here and there, but ultimately the world outside of your ship doesn’t matter so much until near the end of the journey, as the game’s final act unfurls in a way that informs everything that came before it. Coming to appreciate the extended stretches of tranquility that Lone Sails often stretches out is one of its greatest pleasures.

You are always alone, and because of that, your attachment to the ship grows deeper. After a while, exiting the ship for any period starts to feel dangerous despite the lack of enemies. When bad weather conditions kick in at various points, leaving the ship feels akin to having to get out from under your blanket on a cold night. The ship feels alive and reactive, thanks in large part to great visual and sound design. Watching the turbines whir and embers shoot out from the back when you release steam, or even just sitting on top of the ship as it blasts along a flat with its sails out, is a bonding experience.

This is a polished game, with only a few minor issues that I encountered. Every now and then an object in the foreground would obstruct my view of some parts of the ship, but the ship’s layout is easy enough to remember that this was only a minor roadblock. Twice I had to reload my most recent checkpoint because I got stuck–once it was my own fault, the other time I was trapped by a rare invisible wall designed to keep me from going a certain way. But the checkpointing is generous enough that I didn’t lose more than two minutes of progress, and I generally felt totally in control of my ship. It’s also quite easy overall, and up until a surprising death towards the end of it all, I didn’t even know you could die.

Lone Sails is a transfixing, lovely experience, one that takes recurring indie game tropes and does something unique and fun with them. It’s short enough that you could play through it in a single two or three-hour session, but it will likely stick with you for a long time. I can see myself going back in a few months just to revisit the ship, like checking in on an old friend.