Evolving the Narrative with Cloudhead Games’ The Gallery | Blogdot.tv

The critically-acclaimed interactive narrative experience The Gallery has been a must-play since the first episode debuted on Viveport. Using all the immersive tools at their disposal, Cloudhead Games are crafting an engaging story with a rich universe to explore as players search for their missing sibling in a fantastical unknown realm. We sat down with the crew at Cloudhead to hear about how The Gallery came to be and what fans can expect as the series continues.

For those unfamiliar, tell us a bit about yourself and Cloudhead Games.

I’m Antony Stevens and I work with everyone on the team in various ways, from community relations to content creation to narrative design and more.

Cloudhead Games is probably best known for The Gallery, with Episode 1: Call of the Starseed being the first story-driven adventure game built for room-scale VR, and what many consider to be an instant classic at the launch of Vive in 2016. If you bought your Vive in that first year, you probably even received Call of the Starseed bundled with your HMD. Starseed earned over a dozen awards and nominations, including Game of the Year; and its sequel, Heart of the Emberstone, brought us home the annual Viveport Developer Award for Entertainment last year. We’re also pioneers of VR locomotion with snap turns, teleportation (or “Blink”), and other industry firsts.

Where did the idea behind The Gallery come from?

Our team all grew up with fantasy/adventure movies – The Goonies, Labyrinth, The Dark Crystal, Indiana Jones. VR can genuinely transport you, and we wanted to give players an experience that has that same childlike wonder of sitting cross-legged in front of the TV and imagining yourself as the hero in those stories. Except this time you actually are the hero; you can move around, interact with the world, solve mysteries, and wield mystical powers with your own hands. 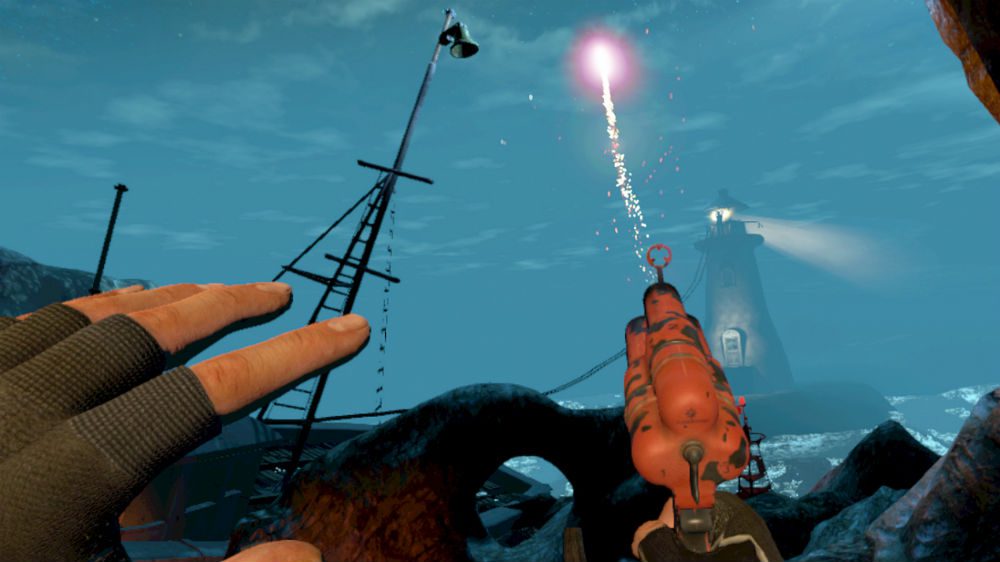 The Gallery is steeped in 80s nostalgia, from the score to the premise to the vintage visual motifs. What would you say are some of Cloudhead Games crew’s biggest pop culture influences on the project?

The Goonies and The Dark Crystal are definitely the biggest two. In Starseed we have a hidden area that’s a full-on homage to a scene from The Goonies, and in Emberstone there’s a temple that’s completely styled after the ritual chamber in The Dark Crystal.

Developing an interactive narrative is no easy task, more so  when you factor in the extra immersion that VR provides. What were some of the biggest challenges you encountered when developing The Gallery?

In room-scale VR with Vive, there is so much inherent freedom to move around during a narrative even before you complicate it with interactions and hand tracking. You can move to the wrong spot at the wrong time and hurt pacing, you can look away from something important as it happens — we can’t just grab the camera and shove it in the right direction like you can in traditional games. We try to solve that by adding as many affordances as we can — as many different ways to guide the player to look at the right things at the right time.

In Emberstone, for example, there’s a part where an enormous rock monster rises up and greets you. The music swells and you can hear a bunch of noise behind you. Your controllers vibrate, there’s a deep groan like only giant rock monsters can, you see a huge shadow cast on the wall in front of you — the entire game essentially screams for you to “TURN AROUND AND LOOK AT THE THING!” But we still get people simply fascinated with some small object they’re playing with in their hands and they never even turn around. That’s how hard it is. 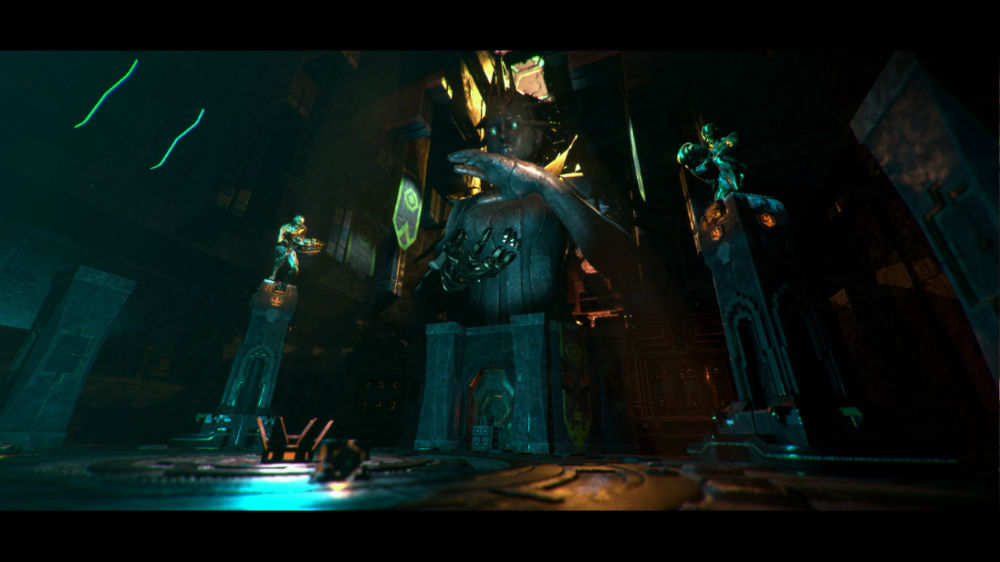 Were there any surprises revealed through observing player behavior and getting fan feedback once the first episode released? Any elements that people particularly responded to that you didn’t predict?

Without giving too much away, there’s a part at the end of Call of the Starseed that gives you a very visceral feeling on your hand. Almost every single player I’ve seen in videos or in person has flinched when that moment happens. Some even say they felt it. It means that they were so immersed and tied into the experience that they were the hero, exactly how we had hoped. I’ve always been really happy with that moment.

Talk to us a bit about what inspired you and the team to develop The Gallery as an episodic series. Is this style of release something you’d like to continue exploring with future projects or are you leaning towards a more traditional ‘all-at-once’ approach?

We went episodic because it meant we could experiment with format and build each episode for its time. With Starseed, we built a game for people to ease into VR, without completely knowing how long people would want to stay immersed. As such, our first release felt more akin to an interactive movie in length and pacing. With Emberstone, we were able to complicate exploration and be more ambitious with storytelling. With Episode 3, we have an experience with more complex physical interactions that require an understanding of the foundations from these first years of VR.

With The Gallery having reached the halfway point for the series, were there any particular lessons learned from the development of Episode I and II that the team is incorporating in future entries?

I mean, all of it! We are fortunate to be one of the few teams in VR that have been here since the very beginning. We have a deep understanding of what works and what doesn’t in VR and you can’t start breaking those rules without knowing them first. Now that we have a strong foundation of interactions and storytelling, we can spend more time utilizing what we know and breaking conventions. We have some truly interesting things coming up in Episode 3 that take all the groundbreaking stuff we introduced in the first two episodes and combines it for a really unique experience.

Both episodes of The Gallery feature some pretty trippy and challenging puzzles. Were brain-teasing objectives something the team always envisioned for the series, or did that element naturally evolve as a result of developing the story you sought out to tell?

Myst was a huge inspiration, and we wanted to use these kinds of puzzles to break up the pace of the game. We also wanted the puzzles to make sense in the context of the world, so that solving them wasn’t just unlocking the next area, but unravelled something in the narrative — solving a mystery, while at the same time engaging you with a full, spatial experience only possible in VR. It made puzzles more complex to build and solve, but they also make a lot of sense for room-scale; moving around the space and investigating objects is a completely different experience in VR. 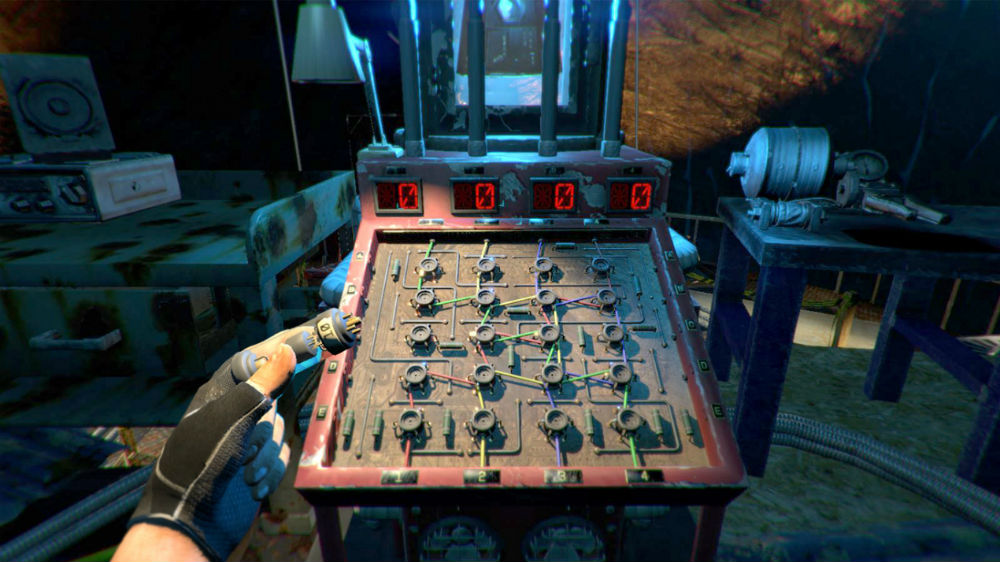 The Gallery seems to deal a lot with the duality of complicated sibling relationships. Was this an intentional motif , and something your team wants to continue exploring? If so, why?

It’s a bit broader than that even. I think the duality of siblings just came with writing about conflicts of faith and science, magic realism, ostracization in a common culture. We try to explore how these sides are both flawed but powerful. Elsie the reckless adventurer, Alex the ponderous rescuer. Sebastian the man of science, Sarah the woman of faith. The things that seperate us are the things that should ultimately bring us together. In Episode 3 we want to push into that core theme–it’s integral to the world of The Gallery.

Music plays a big part of establishing the atmosphere and tone of The Gallery – the soundtrack being provided by award-winning composer Jeremy Soule.  Tell us a bit about how that collaboration came to be. Were there any particular influences on the style and mood, either from your team or from the composer or both?

We were at an event in Seattle with one of the earliest versions of The Gallery and met Mr. Soule there. He tried the demo and told us he loved it–he saw the same future in VR that we did and felt that The Gallery offered an ideal entry point for the art he wanted to make. As a master of magical realism, we couldn’t have dreamed of a more perfect fit for what we were working on.

Are there any tidbits you can share with fans of The Gallery as to what they can expect from Episode 3 (maybe a release date wink wink)?

Episode 3 is a journey which plays with the fabric of reality itself and our personal journeys through it. We’re going to give you tremendous power in shaping that reality through the gauntlet you received in Heart of the Emberstone, leading to an ultimate resolution. That’s all I can say for now.

Once your team has completed The Gallery, what’s next on the horizon for Cloudhead Games? Will you continue to experiment with what’s possible in the world of interactive narrative VR experiences or possibly explore other genres?

We’ve learned so much about VR over the past 5 years and are ready to bring even bigger things to the platform. We’re excited to break the mold and push familiar ideas toward a paradigm shift. We’re a very cinematic team, but we have projects coming that are outside of our usual fantasy/adventure style. If you know us at all, you know that we’re always trying to push the limits of VR, and we’ve got a number of ideas in store that I hope to be able to talk more about soon.

Thank you so much for your time!

The Gallery Episode I: Call of the Starseed and Episode II: Heart of the Emberstone are on sale 50% off during the Viveport Anniversary Event, and are also available via Viveport Subscription