Sunday’s Xbox E3 2019 Briefing was packed with Gears 5 news, including a partnership with the film “Terminator Dark Fate,” the unveiling of Escape mode, and the announcement that Gears 5 will be available for Ultimate Edition owners and with Xbox Game Pass Ultimate members starting September 6, with a worldwide launch on September 10.

Today’s Gears 5 panel at the E3 Coliseum hosted by WWE Superstar Austin Creed brought one more surprise to Gears fans, as Rahul Kohli joined Rod Fergusson and the rest of the Gears 5 cast on stage to announce that he’s joining the Gears 5 family. Kohli, known to fans of “iZombie” as Dr. Ravi Chakrabarti, steps into Gears 5 as the charismatic and confident Fahz Chutani, a character that shares a shrouded and rocky past with JD Fenix and Del Walker. Thrown together to overcome a new threat, Fahz, JD and Del will join Marcus Fenix and Kait Diaz in Gears 5, with a shared test of loyalty and separate motivations bound by duty, friendship, family and blood.

Bringing Fahz to life through voice acting came as a welcome challenge to Kohli, a self-expressed fan of the Gears game franchise. ““I was a gamer long before I had a career in film or television. Gaming was my first true passion, and I had always hoped to someday be able to lend my voice to the industry in a meaningful way. I never thought I’d be fortunate enough to be cast in the Gears franchise for my first game, and it is a true honor. Everyone at The Coalition helped to make this dream come true and I’m forever indebted to them.” 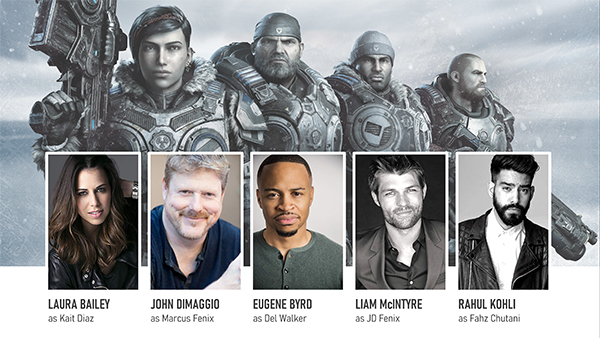 “At its heart, Gears 5 is an intensely personal story – one that challenges our characters like never before. Our returning cast, led by Laura Bailey as Kait Diaz, has set a new franchise standard for voice acting to both evoke these story themes and add new dimension to our characters. With Rahul Kohli joining Gears 5 as Fahz, he embodies a role that both brings a new perspective to our heroes and complements a cast chemistry that truly mirrors the bonds shared by our characters in-game.”

For more on Rahul Kohli joining the cast of Gears 5, check out his interview with Nerdist. Gears 5 early access begins on September 6 for Ultimate Edition owners and Xbox Game Pass Ultimate members with worldwide launch starting on September 10 for Xbox Game Pass for PC and Console members, Xbox One, Windows 10 and Steam.

For more information on Gears 5 and the Gears franchise, stay tuned to Xbox Wire or follow Gears on Twitter @gearsofwar.