“Droiid came through the inspiration of recent innovations going on within the delivery market,” Eben tells us. “As online consumer demand increases, to keep up with growing demand, the idea of autonomous drones delivering small packages to your doorstep isn’t too far off reality.”

Furthermore, a Raspberry Pi 4 is central to how this robot operates, as Eben explains: “The robot can be seen as a Raspberry Pi connected to an Arduino attached to motors. Raspberry Pi acts as the orchestrator behind controlling all components of the robot.” 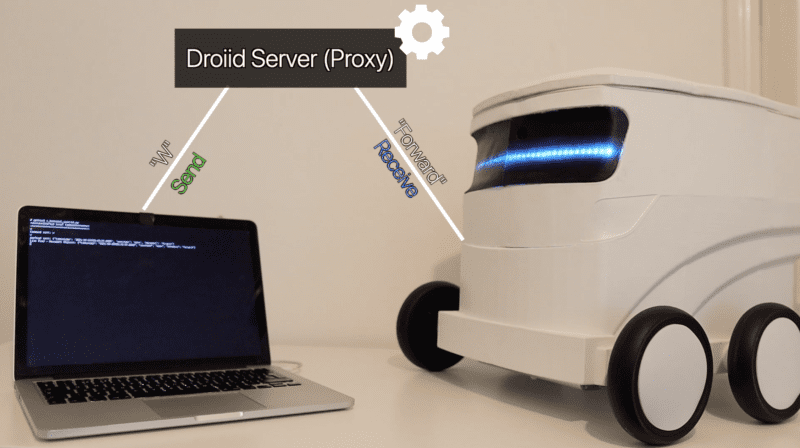 In terms of dimensions, Droiid is not huge (330 mm W × 380 mm H × 340 mm L), but it has a compartment big enough to hold small parcels or food deliveries, and it can be controlled remotely via a livestream chat from anywhere in the world.

Eben has also attached a Raspberry Pi Camera Module, a speaker, and a mic module, and so the robot’s view of the world can be streamed on YouTube or Twitch. Droiid can be controlled through the livestream chat. For instance, a user can write a command (as a message) in the live chat to Droiid, e.g. ‘move? Right’. This command is then sent to a server, and Raspberry Pi receives that message from the server. Raspberry Pi then sends the command to the Arduino, and Droiid receives the message and executes the function. 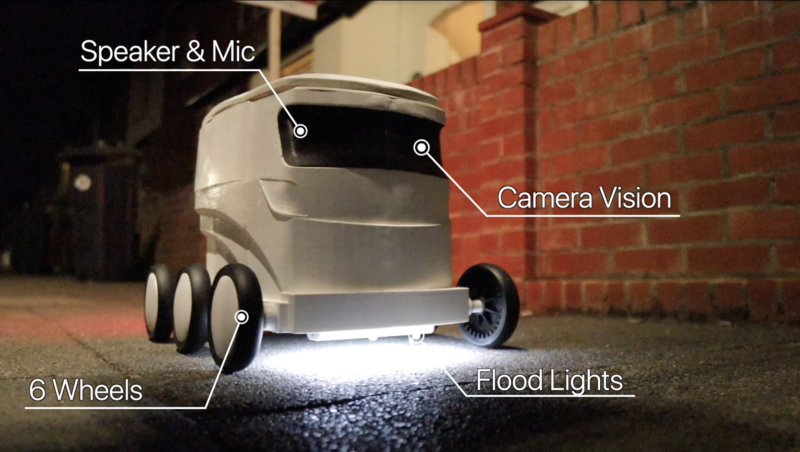 In addition, as well as giving the robot a command to move, users can use TTS (text-to-speech). So, using the ‘say?’ command at the start, users could tell Droiid to say ‘Hello, today is Thursday.’

Droiid was built using 3D-printed parts and, due to the size of the project, the printing had to be broken down into smaller parts in order to be accommodated on the 3D printer bed. 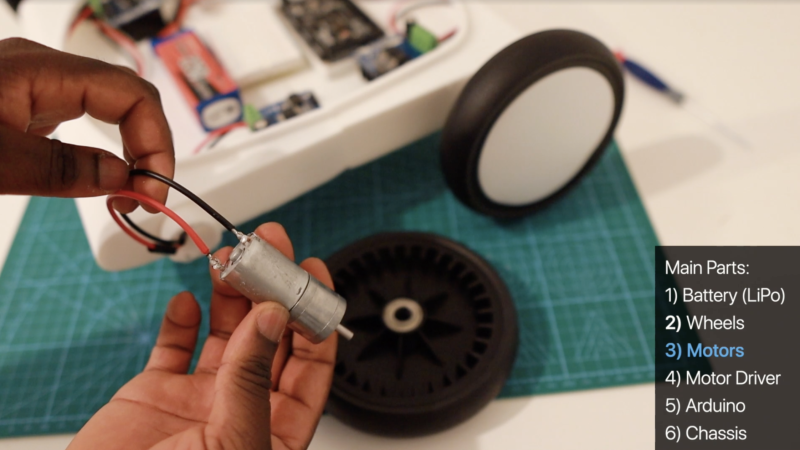 Eben decided to equip Droiid with six wheels mainly as a trade-off between the robot’s cost and its power. “An earlier model of Droiid used four wheels,” he shares. “However, using six wheels seemed to be the sweet spot to get as much power [as possible] from the 12 V geared DC motor to climb inclines with a payload.”

To aid stability over rougher terrain, such as grass, an accelerometer was added so the tilt level can be monitored. An ultrasonic sensor gives Droiid spatial awareness and the ability to detect obstacles. Finally, a bottom-mounted WS812B LED strip lights the way for the robot in the dark.

The feedback that Eben has received from all corners has been hugely positive, as there are clearly exciting possibilities regarding how such a robot can be used. “It’s definitely a conversation starter,” he remarks. “From the maker community, it’s also been awesome – some others are curious how it works and what’s next. I’m now working to take it out to deliver an actual package!” 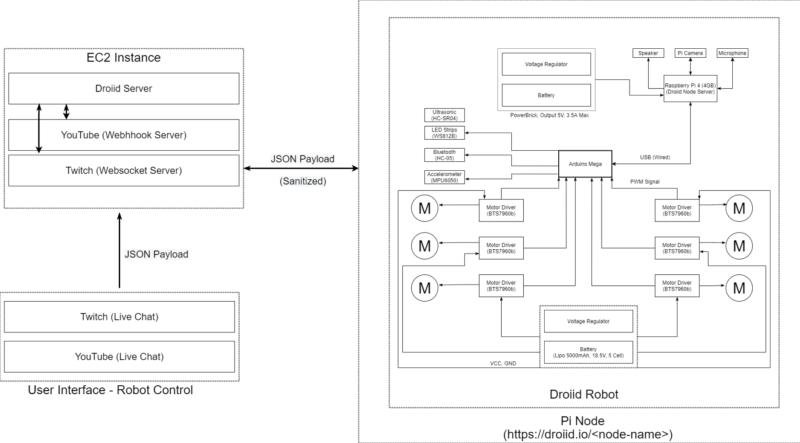 This is just version 1 of Droiid and Eben guarantees that a lot more “features and intelligence” are on the way. Emboldened by the success of the build so far, he is intent on making a number of upgrades. These include improving Droiid’s latency using Apache Kafka – an event streaming platform – so that the time taken from a message being sent to Droiid, to the robot actually performing the action requested, is improved.

Eben has also created a couple of additional robot models, including Droiid Mini, which is the four-wheeled version, and is keen to explore the concept of widening the cohort of people who can actually control Droiid’s movements. “The idea of others controlling the robot over livestream to complete tasks [or at] sports events is something I’m interested in looking further into,” Eben enthuses.