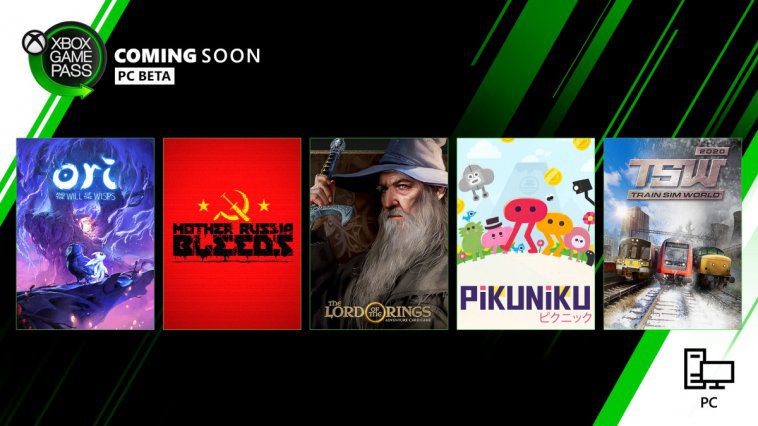 If you fired up the new Xbox (beta) app for PC recently, you probably noticed a nice shiny new addition: Halo: Combat Evolved Anniversary that has joined Halo: The Master Chief Collection. And if you keep it open, you’ll see the pre-download for Ori and the Will of the Wisps is also available (because you’ll want to play it on day one). Now, keep that Xbox (beta) app open because we have more games coming at you!

The Lord of the Rings: Adventure Card Game
Build a deck of iconic heroes and challenge the forces of Sauron in this thrilling tactical card game. Go forth on your own or join forces with a friend and explore famous locations, complete story-driven quests, and forge your own legend of Middle-earth. But beware the Eye of Sauron. Should you draw his attention, all will be lost…

Mother Russia Bleeds
An old-fashioned beat ’em up with big doses of adrenaline and trippiness, somewhere between the classic style of Streets of Rage and the ultra-violence of Hotline Miami. Set in a cold, ruthless Soviet Union, Mother Russia Bleeds aims to conjure up anxiety, unease, and frenzy.

Ori and the Will of the Wisps
Available on release day for Xbox Game Pass for PC! Ori is no stranger to peril, but when a fateful flight puts the owlet Ku in harm’s way, it will take more than bravery to bring a family back together, heal a broken land, and discover Ori’s true destiny. Embark on an all-new adventure in a vast world filled with new friends and foes that come to life in stunning, hand-painted artwork. Set to a fully orchestrated original score, Ori and the Will of the Wisps continues Moon Studios’ tradition of tightly crafted platforming action and deeply emotional storytelling

Pikuniku
An absurdly wonderful puzzle-exploration game that takes place in a strange but playful world where not everything is as happy as it seems. Help peculiar characters overcome struggles, uncover a deep state conspiracy, and start a fun little revolution in this delightful dystopian adventure!

Train Sim World 2020
An immersive simulator that uses real-world data to bring to life the performance, sounds and power of real trains. Featuring complete in-cab interactivity, accurate detail on locos, real-world routes and hours of gameplay. Take to the rails with the brand-new Train Sim World 2020 Edition and find everything you need to master new train simulator skills.

In Case
You Missed It

March 13 – 15: Bleeding Edge (Beta)
For another weekend, welcome back to the world of Bleeding Edge! This is round two of Beta testing on both console and PC for Bleeding Edge, the electrifying online brawler where every fighter comes mechanically enhanced for mayhem!

March 13: State of Decay 2: Juggernaut Edition – Xbox One and Windows 10 PC
Check out this free update to the existing game with Xbox Game Pass! This remaster is packed full of new updates and experiences, spin off of original content and access to all 3 add-on packs released to date, plus cross-platform multiplayer and more!

You’ve got some time
to give these games another play before they go.
Reminder that if you want to keep the fun going, you can use your membership
discount buy them before they leave our library for up to 20% off!

I’m sure you’ve
figured it out, this isn’t all the games we’ve got to give. Keep an eye on Twitter, and we’ll remind
you when games are available to play, and when new ones are coming. If you
haven’t tried Xbox Game Pass for PC (beta) yet, we’ve got more great games
coming and you can try your first month for $1. It doesn’t get easier than that
to play some amazingly good games. Cheers friends!

Related:
Coming Soon to Xbox Game Pass for Console: NBA 2K20, Ori and the Will of the Wisps, and More
Celebrate the Legacy of Star Trek Online on Xbox One with New Episodes, Operations, and More
Space Engineers Rolls out to Xbox One on April 15