Behind the scenes of Ghostbusters: Afterlife game in Dreams | Blogdot.tv

What do ghostbusting and game development have in common? More than you’d think, it turns out. But there’s one thing that comes to mind above all else: teamwork. Available to play in Dreams from today until February 28, 2022, Ghostbusters: Afterlife in Dreams is the result of an 18-week-long collaboration between Media Molecule, Sony Pictures, and the Dreams community.

After being contacted via social media, Impy-award winning community creators **Guillaume Chevrier** (aka [SlurmMacKenzie] and **Alfred Nilsson** (aka [byvsen]) soon found themselves in meetings with Mm’s Director of Operations and Strategic Initiatives, Gemma Abdeen, to discuss an opportunity.

“Like, what is this?” Nilsson found himself thinking. “This could be literally anything. Then when Gem told me what the project was and what I would be doing, I got really excited and hopped on.” Chevrier nods. “Same for me. I think it was the first call with Gem where she told me it was a Ghostbusters project, and I was really excited.” 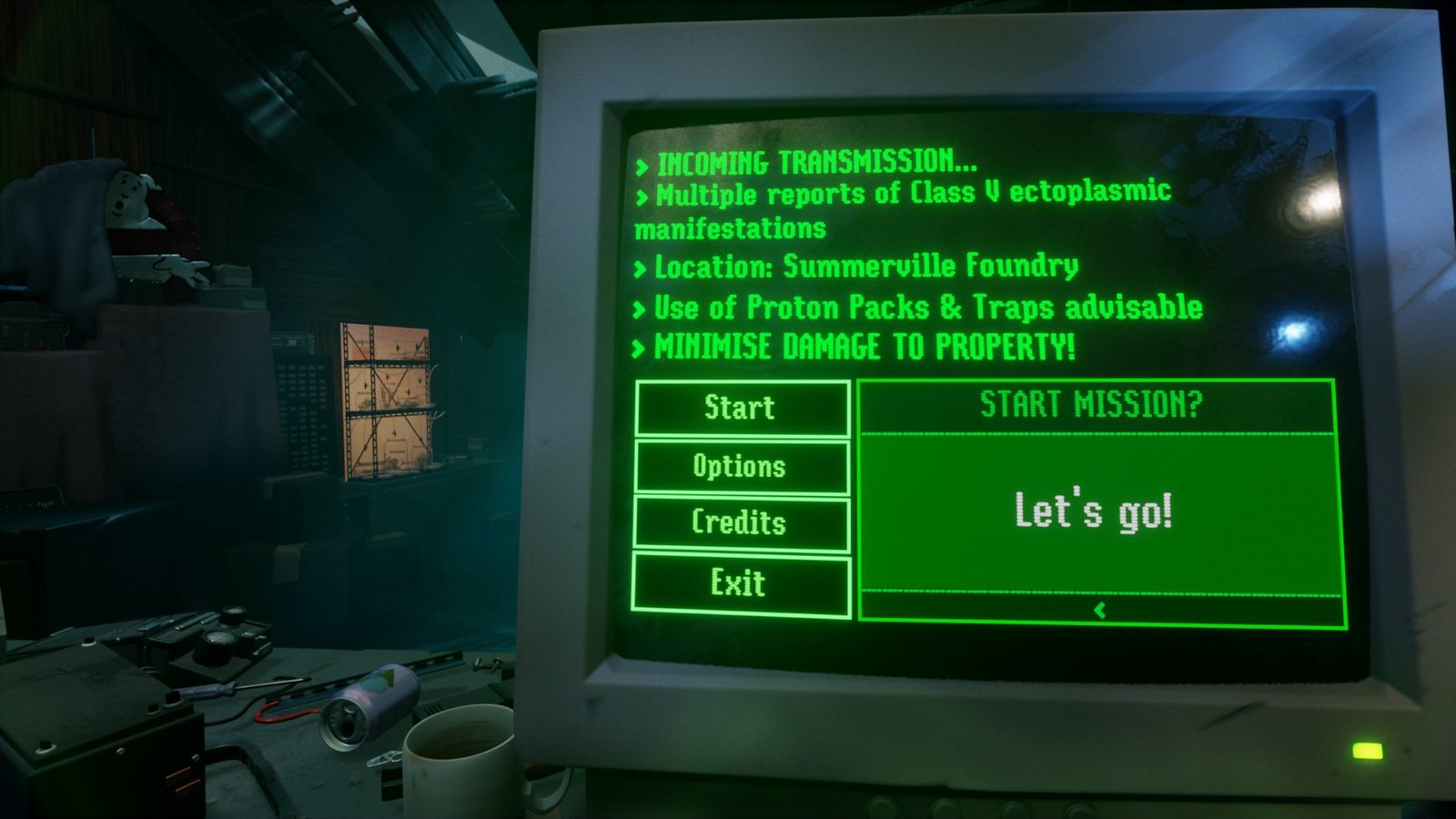 Chevrier would be working on gameplay design, and Nilsson on animations. A short brief had already been put together by Mm and Sony Pictures. The game would have to last 60 seconds, as the cast of Sony Pictures’ Ghostbusters: Afterlife would be setting their own scores that fans could try to beat.

Chevrier laid down the basics of the controls, including creating a version of the iconic Ghostbusters proton beam that the player could fire in first-person view, and set up much of the underlying Logic for the destructive environments. Media Molecule lead designer Richard Franke then came aboard to direct and help the team make some of the game-defining decisions (as well as do a bit of environment modelling, which Mm’s Dreams specialist Martin Nebelong would polish with lighting and effects).

“We asked ourselves, ‘What is the core experience of being a Ghostbusters team member?’” Franke says. “To me, that felt like the most important thing: we need to make the player feel like a member of the Ghostbusters team. Before you do anything else, you’ve got to get that catching of the ghosts to feel right.”

The first version that Chevrier had been working on featured fast and furious ghostbusting. “You could really quickly catch the ghosts,” he says. “It was more like they were jumping and you had to catch them when they appeared. But you could not feel the beam – so there was a lot of iteration where we tried to make the ghost move in a way that feels like you’ve got them in your proton stream, and you try to fight against them.” 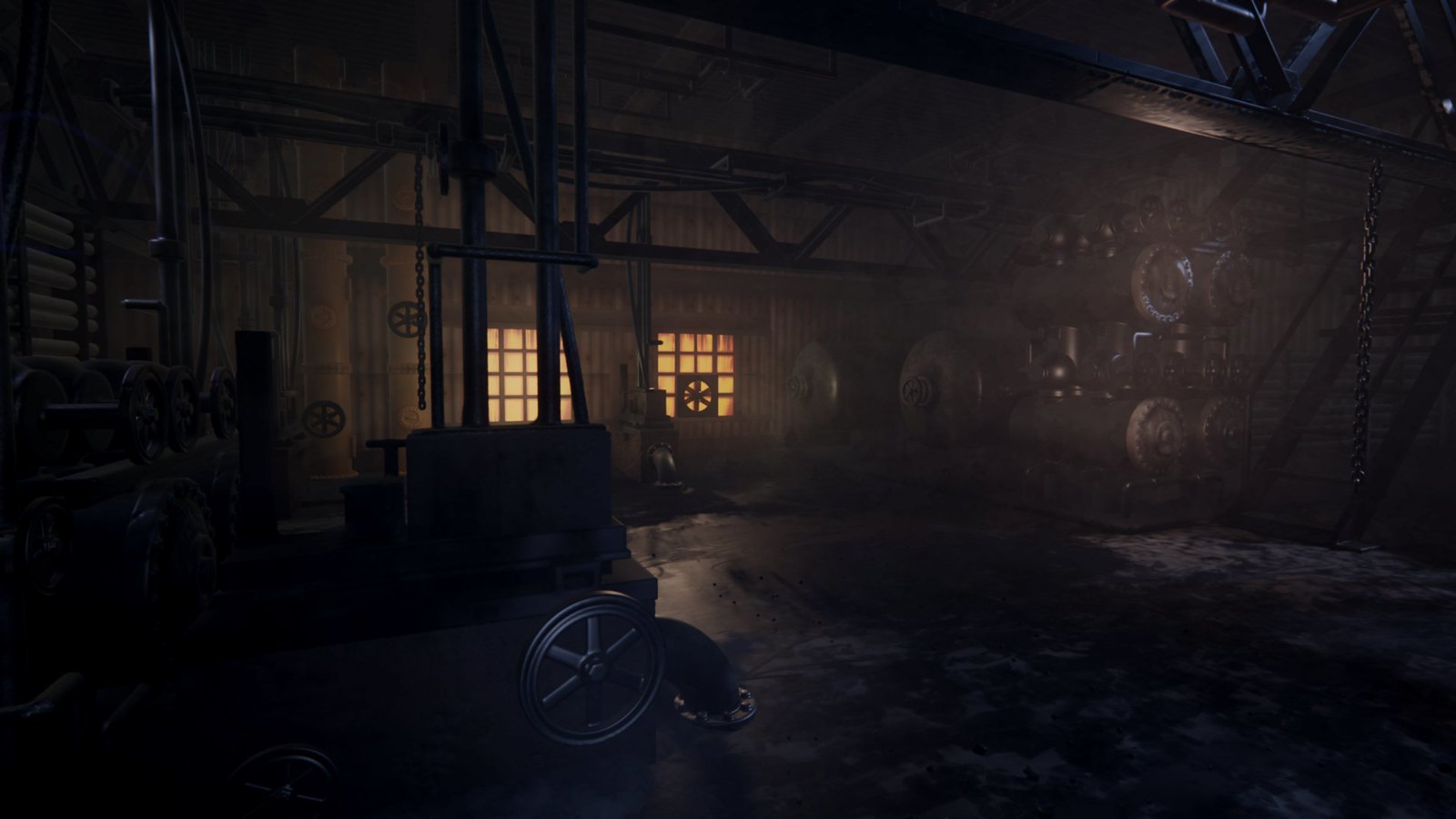 The team spent time watching and referencing the original Ghostbusters movie, breaking down the behaviours of the ghosts and how the heroes interacted with them. “There’s the iconic scene with Slimer in the hotel ballroom,” Franke says, “and I was like, okay, this is the scene we want to emulate.”

They’d need to have ghosts flying around unawares, then in a behaviour phase where they’re aware and are avoiding being caught – before a ‘catch phase’, where they’re locked in a struggle with the Proton Beam. “The idea was that the ghost would have a bar that would go down when you’re pulling in the opposite direction. So it almost became like a fishing game, in a way.” Reduce the energy enough, and you could more easily pull them into a trap.

At first, players would have to manually throw out traps – but the team quickly realised they could create a more fluid time-attack experience by having it happen automatically.  The team based their work on the upcoming film Ghostbusters: Afterlife.

“We had a super-short clip of the new movie, where we could see unfinished effects and the new ghosts,” Chevrier says. Nilsson nods: “It was probably my favourite part of the whole thing, because you don’t normally get to see that stuff while it’s still in development.”

Working on such a huge franchise, the collaboration was carried out with the utmost secrecy. Nilsson had viewed a clip of the new enemies in action just once during a video call before he started his first attempt at ghost animations. “So I had to memorise how the ghosts moved, like the Muncher with its six arms.” How did he manage it? “There was a lot of improvisation in the animation, trying to figure out how the ghost moved, but the clip helped – and it definitely helped watching it a second time later on! The ghosts all move really chaotically, floaty, all over the place – it was really fun to try and nail that in the animation.” 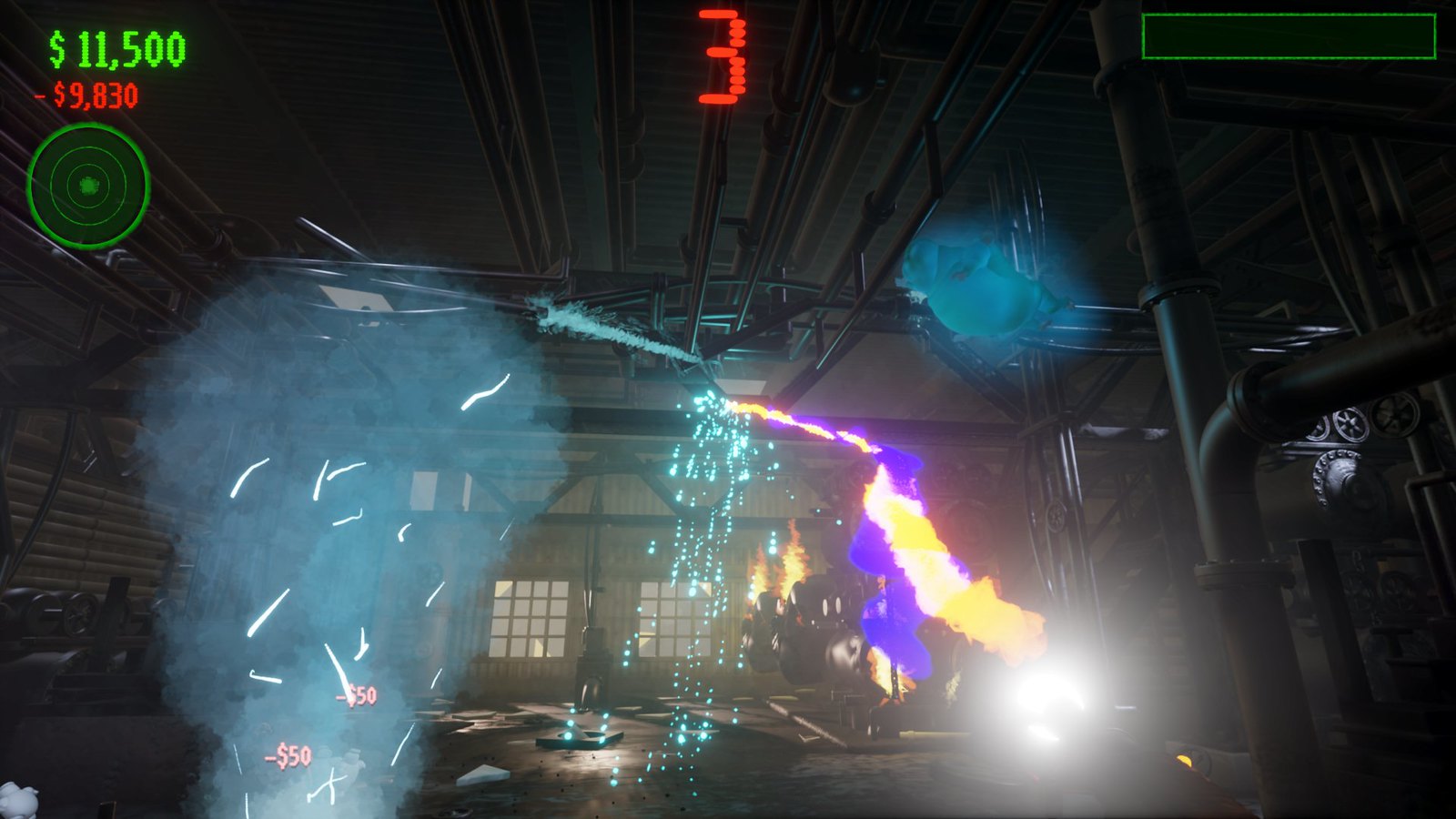 Interactions with the ghosts would be a key part of helping the player feel like part of the Ghostbusters team; another was letting the player leave their mark on the world. “We really wanted to get across the extraordinary damage that the proton pack creates,” Franke says. He recalls the comedy of the aftermath of that hotel ballroom scene: “They’ve probably caused more damage than it costs to actually catch the ghost! So we wanted to get a destructible environment in there.”

Wreak too much damage in Ghostbusters: Afterlife In Dreams, and the bill for the damage is taken out of your final reward. This led to the idea for the in-game function of the Mini-Pufts that appear in the new film, Franke says: “The scenes that we had seen of them, they were in a shop and they were destroying the shelves – so it felt logical that they would somehow increase your damage count, running in and kicking at fragile parts of the environment with their stubby little legs – animated with relish by Nilsson. “I had some footage of them looping on my computer while animating,” he says. “It was really fun to see how bouncy they were. And like, immediately, the puppet in Dreams started moving in the same way.”

With the ghost-catching and the waves of Mini-Pufts, Ghostbusters: Afterlife in Dreams truly started to take shape as a fast, frantic and tactical time-attack challenge – and started to reflect yet more aspects of Ghostbusters history.

“We wanted it to be a little bit like pinball, in a way,” Franke says, “where you’ve got your main thing, which is trying to keep the ball on the table, and that’s the catching of the ghosts. But then you’ve got to hit against the targets, which is your stretch goal – and then you’ve got another stretch goal, which is even harder to get. We actually stacked them up so you don’t see any Mini-Pufts until you’ve caught one ghost. So you’ve got a sort of ratcheting up of gameplay over the course of one minute – and then once you’ve shot a certain number of Mini-Pufts, the Terror Dog will start to appear.”

To say too much about the Terror Dog’s appearance might spoil the fun (although Nilsson is incredibly proud of his work on it: “It was probably the most challenging to animate, because I’d never animated a four-legged character before!”). But its inclusion in the game feels like a fitting homage to the secrets and surprises of pinball machines back in the day. “It’s very meta, but there’s something great about people talking about that stuff,” Franke says. “That’s why pinball was exciting. ‘Have you seen the thing that’s really hard to get?’ – a little bit like old-school video games. It’s nice to give the player things to look forward to, and to come back for – each time they’ll get a little bit better, their score will go up, and they’ll see more exciting things happen.” 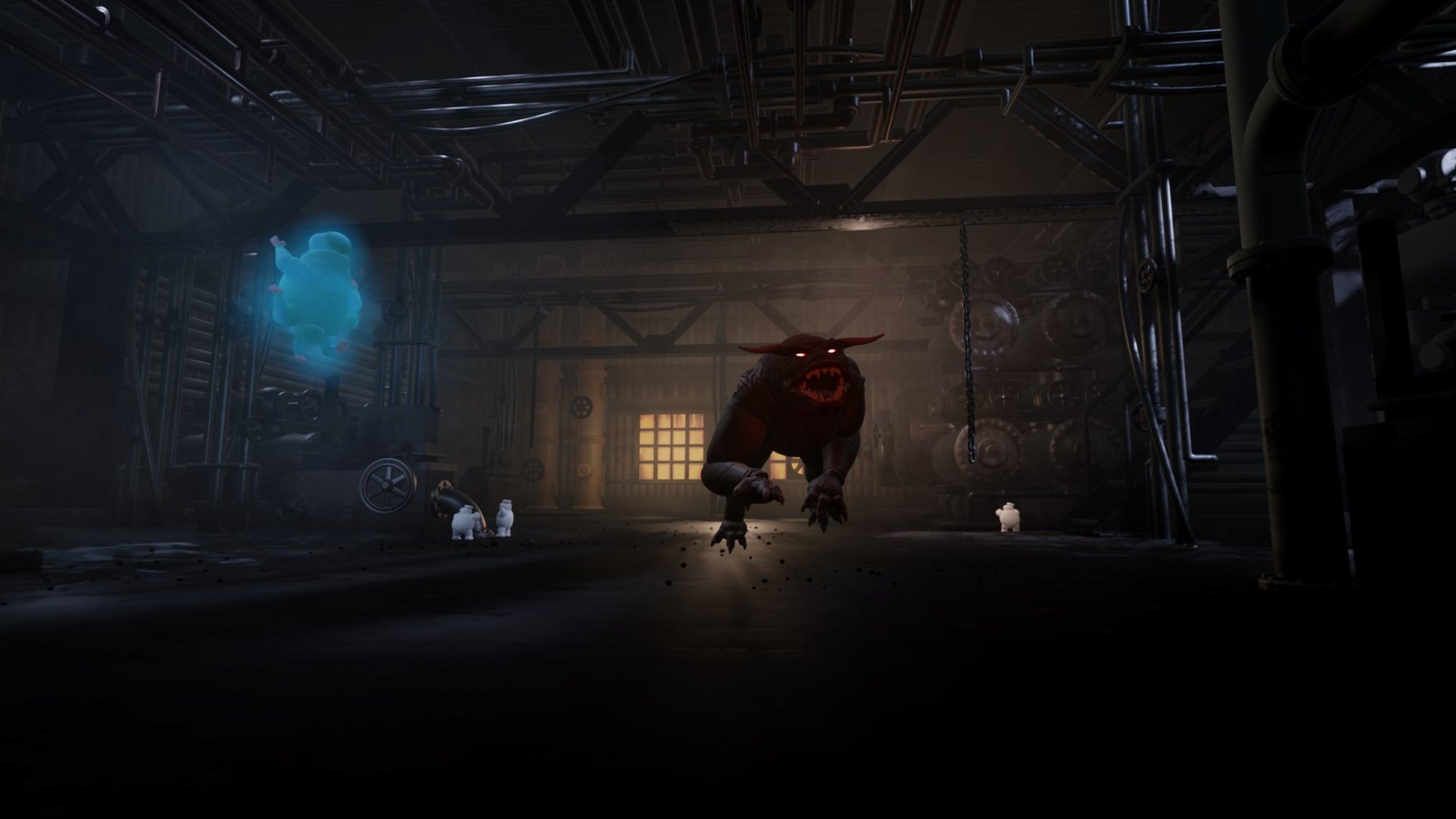 The final result is a collaboration that pays homage to the Ghostbusters series’ past, as well as its present in Ghostbusters: Afterlife – as well as the power of Dreams, with the game itself developed in just 12 weeks. For its developers, the tonal similarities between the Ghostbusters franchise and Dreams itself – slapstick, a bit weird, but ultimately fun for all – made the collaboration feel like a (super)natural one.

“I grew up with the Ghostbusters movies,” Chevrier says. “For me, it’s something that evokes good memories. It’s creepy but fun, so you can watch it as a kid and you’ll be scared, but you won’t have too many nightmares – because it’s the funny side of creepy.” Nilsson agrees, pointing to the exaggerated movements of the films and how well it fits with both Dreams’ puppeteering tools and his own cartoony animation style.  Franke, too, sees the similarities in points of view between the Ghostbusters franchise and Dreams. “We both have a similar silliness – like, our Halloween event has this sort of kooky spooky Ghostbusters vibe,” he says. “So it’s definitely easy for us to fit that within our content.” But there’s another reason why he thinks this was a neat match for a collaboration. “The right answer for me to say as the director,” he grins, “is that we can make any brand fit! Because it’s just all about scope, and being sympathetic to the brand. Dreams allows us to create bespoke gameplay suited to any kind of brand.” 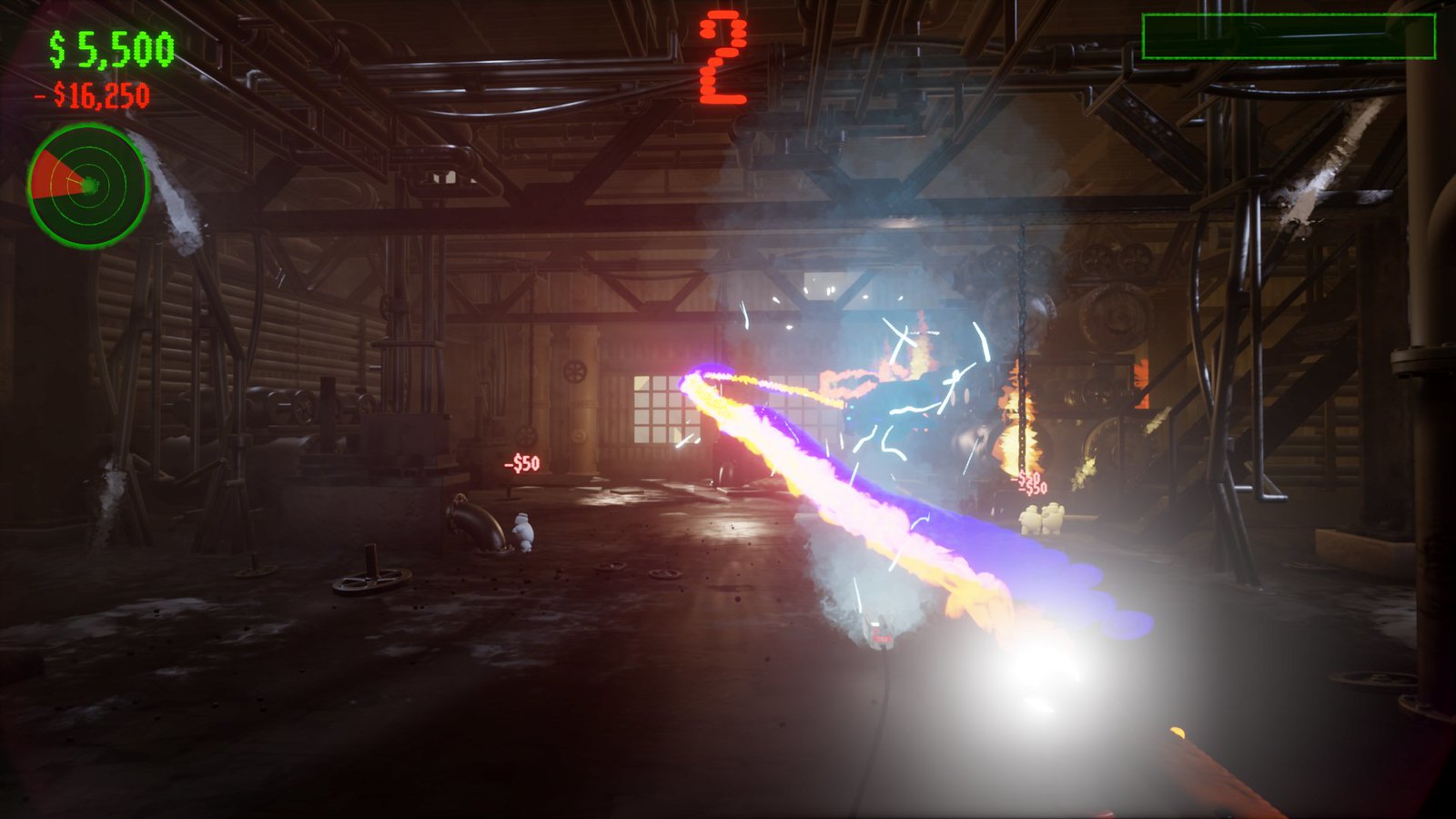 Beyond the versatility and power of the tools, however, the real shared strength at the heart of the Ghostbusters franchise and Dreams – and this project – is undoubtedly community and collaboration, from the team at Sony Pictures, to Media Molecule, and the talented pool of creators using Dreams. “You know, we’re only a small studio, in the grand scheme of the game industry,” Franke says. “So the community is very valuable to us as a resource. Working with the community is lovely because they’re very respectful, they’re not full of cynicism – they’re very happy to be helping out, they’re happy to be being paid for their time to make these games. I think it’s probably very scary on their part, so it’s good to be there to encourage them and to reassure them that they’re doing a great job.”

And be sure to catch the next chapter in the original Ghostbusters universe exclusively in movie theatres starting this November! In Sony Pictures’ Ghostbusters: Afterlife, when a single mom and her two kids arrive in a small town, they begin to discover their connection to the original Ghostbusters and the secret legacy their grandfather left behind. From director Jason Reitman and producer Ivan Reitman, the film is written by Gil Kenan & Jason Reitman.