We’re very excited to announce the release of Astria Ascending, a JRPG published by Dear Villagers, available today for Xbox One and Xbox Series X|S and with Xbox Game Pass. The French-Canadian studio Artisan Studios has developed Astria Ascending in collaboration with some famous and talented Japanese creators, whose names might be familiar to you.

Here’s five reasons to check out this new turn based JRPG. Let’s get started!

A rich and mature story supported by a sumptuous score

In a world where chaos looms, eight fated heroes are chosen. They become demigods and are doomed to die while holding the fate of the world in their hands. The captivating story is authored by the great Kazushige Nojima, known for his work on the Final Fantasy and Kingdom Hearts series. His wish was to offer a mature and intriguing story, emphasizing the complex relationships between people and their choices regarding their duty.

“Each hero has their own perspective, but it’s the relationships they form with one another that truly brings the story to life,” said Artisan Studio’s Game Director Julien Bourgeois.

The fate of Astria Ascending characters is supported by a meaningful soundtrack scored by Hitoshi Sakimoto, known for the Valkyria Chronicles series, Final Fantasy XII, Vagrant Story, and many others. The music beautifully supports their adventures and draws players into the heart of their destiny, dealing with their fears and sacrifices.

“My music supports Astria Ascending characters to help players understand them. (…) That means my music must invite players to have faith in the potential of people,” said Hitoshi Sakimoto in reference to his musical contribution to the game.

In Astria Ascending, you explore the world of Orcanon, a richly imagined and fully animated 2D landscape, and travel through five cities with a wide variety of inhabitants. If you like the art style of Astria Ascending, you should know that the backgrounds and the beautiful animations are hand-drawn and created by Akihiko Yoshida and Hideo Minaba’s CyDesignation studio itself!

There are 25 dungeons to walk through strewn with monsters, called Noises, and for those who like to brainstorm, you’ll have to solve environmental puzzles with a wise use of your powers. A dynamic weather system will rhythm your exploration with sunny and rainy moments, but also with snow and sandstorms.

An amazing cast of unforgettable characters

In Astria Ascending, you’re in control of the 333rd Demigods unit investigating on the mysterious events that threaten the Harmony. Demigods are not immortal and have a short life span since they’ve accepted their duty and fate.

It’s a diverse team of eight heroes from 13 to 63 years old and from completely different backgrounds, aspirations, and personalities. From Meryos to Arktans, including Awisis and Zefts, you will assemble a team of characters of various fantastic races and an extensive arsenal of skills.

The unique job system in Astria Ascending offers a lot of customization by allowing each demigod to grow his individual skills. While you’re progressing, you’ll unlock up to three jobs in addition to your base job for each demigod and as you fight the Noises, your team of demigods will level up and earn skills points (SP).

These skills points can be spent on each character’s skill tree to unlock new skills, passive abilities, and stat boosts. Thus, the different jobs you unlock have skill sets you can customize through an Ascension Tree which make each playthrough unique. You’ll have to choose wisely!

Astria Ascending offers a rewarding and innovative turn-based combat. Alongside the more traditional turn-based battle features, you’ll have to manage new mechanics. You can collect legendary beasts and summon them into the fight and use powerful moves called Cosmo Breaks to give your team the edge. But that’s not all!

Successfully hitting an enemy’s weakness will make you earn Focus Points, which can be used to improve your abilities and make them more effective. Your actions can however backfire and can build up a focus point deficit by hitting enemies’ resistances, so your challenge is to analyze and know the characteristics of each monster to fight them in the best way possible.

If you are thirsty for battle, you can accept the hunts of strong monsters the Orcanon’s inhabitants ask you or find the Arena. Prepare your arsenal and be ready to fight waves of increasingly powerful enemies!

Astria Ascending is a turn-based and gorgeous hand-drawn JRPG developed with the help of genre veterans, and it’s available to play today for Xbox One and Xbox Series X|S and with Xbox Game Pass. 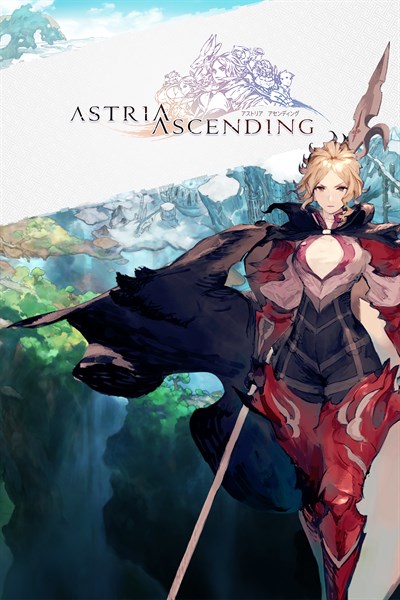 ☆☆☆☆☆ 6
★★★★★
$39.99
Get it now
PC Game Pass
Xbox Game Pass
Explore the vast and beautiful world of Orcanon.
Visit five different cities populated by unique creatures and solve more than 20 dangerous dungeons. With over 50 hours of gameplay and a range of fun mini-games – including shoot ‘em ups, an original fantasy-themed card game and challenging environmental puzzles. A grand tale of fate and sacrifice Immerse yourself in a fascinating narrative rife with betrayal, sacrifice and terrors. A story based around adult characters, Astria Ascending offers a more mature experience and extensive dialog. A rewarding turn-based combat system.
Fight over 200 different monsters in captivating turn-based combat. Collect and summon legendary beasts into the fight and build up your power to wield legendary Cosmo Breaks. Meet an unforgettable cast of characters Pick from eight customisable player characters spanning a range of fantastical races and skills, and assemble a heroic team that must sacrifice everything to save the world. With 20 classes to pick from and an array of unique skills to command, their fates are doomed, but the world is not. A hand-drawn adventure crafted with skill and passion. From a team featuring developers from Final Fantasy, Nier Automata and Bravely Default, Astria Ascending includes full voice acting in Japanese and English, a traditionally animated fully hand-drawn 2D world and a dynamic weather system.

Related:
The Eternal Cylinder: Designing Survival Mechanics for a Planet Being Destroyed
Race Against Time in Aeon Drive, Available Today for Xbox One and Xbox Series X|S
Use Psychokinetic Powers in Scarlet Nexus with Xbox Game Pass Today