Your Nightclub Bouncer Job Just Got Real in Out of the Box on Xbox One | Blogdot.tv

Our club is finally open, so get in line and prepare to enjoy Out of The Box on Xbox One!

So, what is Out of The Box? Well, it’s a quirky, cartoonish bouncer simulator. Players not only get to do a bouncer’s job, meeting all sorts of strange characters and getting physical with some of them, they also get to experience a bloody, decision-based narrative with a pinch of dark humor and political incorrectness!

In Out of The Box, players get to experience the night from the particular perspective of an ex-convict named Warren Baker, who cannot escape from his past. Although he just wants to redeem himself, he can only find a job as the new bouncer of the luxurious club The Box, which belongs to his old Mafia boss. Here, he’ll have to deal with its problematic customers, as well as the ghosts from his former life as a thug.

Out of The Box is our first project as Nuclear Tales, our small development studio located in the Mediterranean city of Elche, Spain. The long journey until its launch started with another artist and myself. We share a special talent that didn’t fit with the working class of the 2000s. We usually met to have some beers and talk about video games, especially the graphic adventures of the 90s. That’s why, in 2010, we decided to start making video games. Our first project: Randal’s Monday, a graphic adventure with a classic approach and many references to pop culture. After launching Randal’s Monday with great success, we decided to create our own company, Nuclear Tales, and start developing with our own brand. 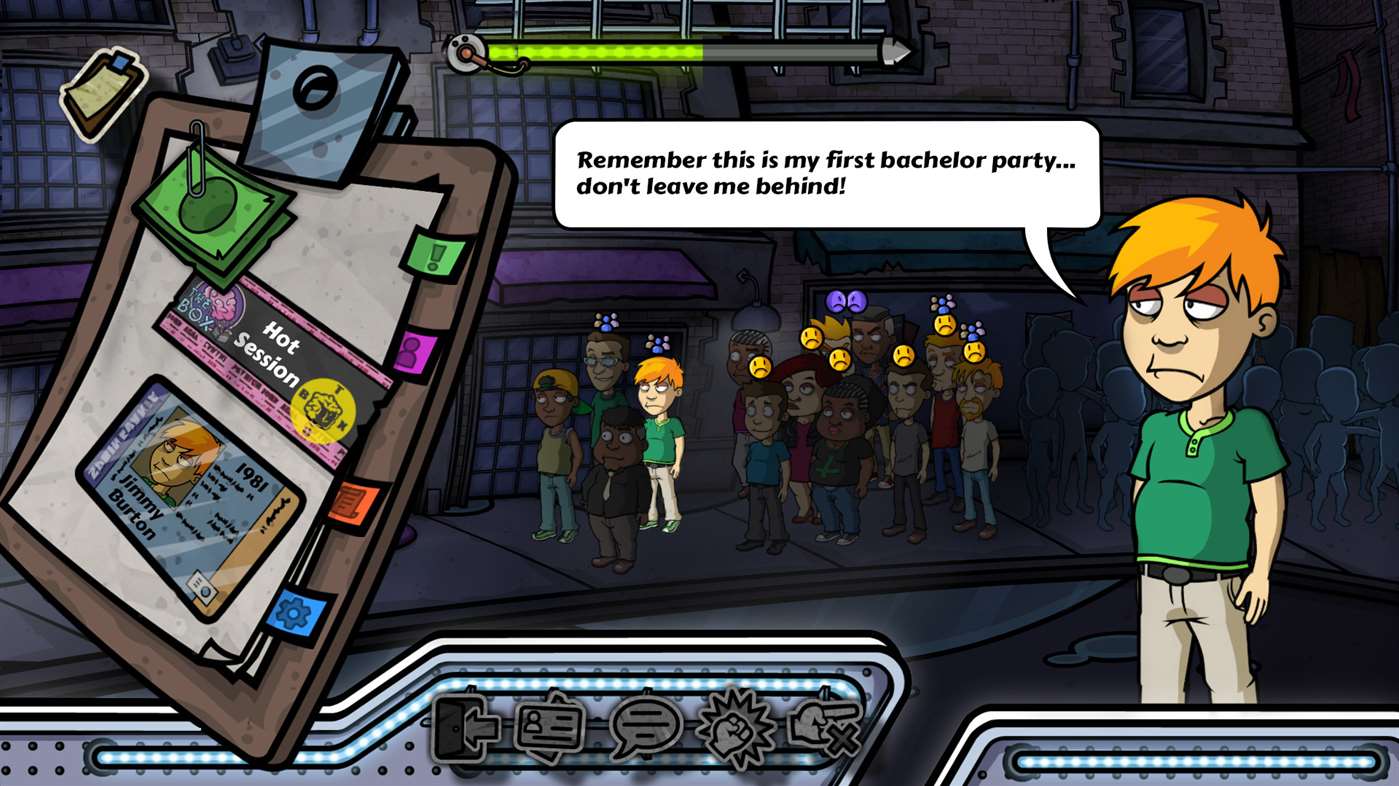 With Out of The Box we look for deep contrasts and to go beyond the narrative of our previous titles. We want to offer simple, pure entertainment mixed with a slightly challenging gameplay and a deep plot that unravels little by little. This narrative adapts to the decisions players take. We also worked on the clash between a carefree, humorous visual style and a dark, serious story, something along the lines of Tim Shafer’s Full Throttle, one of our main inspirations. The result is a shocking time-management title that swings from the mundane to the extravagant, from funny situations to dramatic instances, and back again.

We believe Out of The Box reflects our society through its main mechanic: managing the queue of the club. In the modern world, prejudices and stereotypes determine our choices. These decisions unconsciously shape our environment, each one serving as lessons about life, about measuring each step we take in this world. The same happens in Out of The Box, when we take rushed assumptions about the guests of The Box and decide prematurely who can and cannot get through its doors. Eventually, these actions will come to haunt us in many forms, some of them leading to unexpected consequences.

Before starting the development of Out of The Box, we remember the time we met a Spanish influencer named Gonzalo, or Gona as he is known on YouTube. Randal’s Monday was almost finished and we were moving to different gaming events, looking to get the word out about our title. It was at one of these trade events that we met him, a young and nice Spaniard that loved the game from the first moment he played it.

Gona wanted to create a gameplay series about Randal’s Monday for his YouTube channel. At the moment, he had a rather small but very passionate community that enjoyed the game alongside him. He had such a good time that we kept in contact, which eventually led to us illustrating his books. That’s why we decided to include him as a guest character in Out of The Box! We would love to generate this kind of relationship with our players, this time with Out of The Box.

Related:
New Games with Gold for November 2018
A Letter from Chris Charla: ID@Xbox Celebrates Release of 1,000 Titles Through the Program
The Abyss Seasonal Update is Now Available for No Man’s Sky on Xbox One