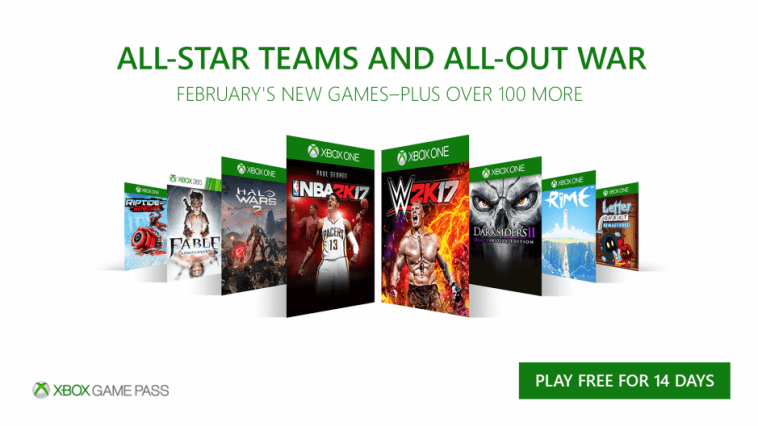 February brings a mix of eight new titles to Xbox Game Pass, with something for absolutely everyone to enjoy in addition to the over 100 great games already included in your Xbox Game Pass membership. You can look forward to playing NBA 2K17, WWE 2K17, Halo Wars 2, Darksiders II DE, Fable Anniversary, RIME, Riptide Renegade GP, and Letter Quest: Grimm’s Journey all available February 1.

NBA 2K17
Xbox Game Pass members loved the stunningly realistic, world-class simulation basketball and engaging Spike Lee MyCareer story that NBA 2K16 had to offer — it was one of the most-played games in Xbox Game Pass when we launched last Summer.

Well, consider the ante upped this February as the critically acclaimed NBA 2K17 enters the Xbox Game Pass catalog and brings everything you loved about NBA 2K16, plus so much more. NBA 2K17 once again delivers all 30 NBA-licensed franchises and arenas, as well as an even deeper roster of international and classic teams and players. And as fans of the franchise have come to expect, NBA 2K17 delivers perhaps the best single-player career experience in MyCAREER. If you’re into developing dynasties and managing front offices, NBA 2K17’s stellar MyGM mode might be right up your alley.

The next level leaps are most evident in MyTeam, a deep and diverse game mode that offers you the opportunity to build your very own NBA dream team, complete a multitude of mini-games and challenges, and take on the computer or players online in competitive matchmaking.

Do yourself a favor and make some time to drop a few dimes, splash a few threes, and throw down a sick dunk or two in NBA 2K17 — the ball’s in your court! And if you really love NBA 2K17, check out the daily updated rosters, NBA matchups, and other great features in NBA 2K18, available for purchase today in the Microsoft Store.

WWE 2K17
With WWE 2K17’s addition to Xbox Game Pass on February 1, members can dive into a new round of 130 legendary wrestlers, classic matches, upcoming talent, and even more available via DLC, your favorite wrestler is almost certain to be found in WWE 2K17.

Have you dreamed of entering the ring? If so, WWE 2K17’s MyCareer mode will help you launch your own path to digital stardom. You can also create your own WWE rivalries, promos, and pay-per-view events in Universe mode. And, of course, there is online multiplayer available if you want to test your attacks, counters, and specials against other wrestling fanatics over Xbox Live. WWE 2K17 even lets you take the action outside the ring, bringing back brawling in the crowd and backrooms. There’s so much to do in WWE 2K17, you may lose track of time. Just don’t lose track of your opponent or you might be introduced to a steel chair!

Halo Wars 2
Microsoft’s own 343 Industries is getting in on the Xbox Game Pass action in February, bringing you Halo Wars 2, the beautiful and challenging RTS sequel to Halo Wars. Build out your bases, gather and manage critical resources, and defeat enemy factions with your superior military strategy and combat. Solo or co-op, Halo Wars 2 is among the very best strategy games on Xbox, and we are excited to have it join the fray on Xbox Game Pass. And for those of you who have an Xbox One X, you’ll be pleased to know that Halo Wars 2 is Xbox One X Enhanced, with 4K HDR support, as well as super-sampled anti-aliasing for 1080P tv sets (it’s as impressive as it sounds).

Darksiders II: Deathinitive Edition
Our parade of stellar sequels continues with THQ Nordic’s action RPG Darksiders II: Deathinitive Edition. Many of our Xbox Game Pass members jumped into Darksiders Warmastered Edition so now’s a great opportunity to continue exploring the tale of The Four Horsemen — this time as Death. Discover his story through epic quests and challenging side missions while battling enemies, toppling bosses, and solving puzzles along the way. Defeat Corruption and prepare yourself for the next chapter in the story: Darksiders III, coming soon to Xbox One!

Fable Anniversary
With the addition of the gorgeous and engaging remaster of the original Fable game, Xbox Game Pass members can now play through the entire Fable trilogy. Each game in the series offers a tremendous story and RPG experience. And with Xbox Game Pass, getting Fable is easy. The hard part will be putting the controller down once you’ve become engrossed in Fable’s incredible world of action and adventure!

Rime
If you enjoy immersive single-player puzzle-adventure games then indie gem Rime is for you. In Rime, you control a young boy isolated on a seemingly deserted island and must help him solve puzzles on his journey to escape the island. With a unique and beautiful aesthetic and a story inspired by the five stages of grief, Rime is an experience a bit unlike anything else in Xbox Game Pass. We’re hopeful you love its charm and ingenuity every bit as much as we do!

Riptide Renegade GP
Racers and jet ski fans, we’ve got something this month for you as well with Vector Unit’s fast-paced aquatic racer Riptide Renegade GP hitting the catalog in February. Riptide Renegade GP is a futuristic racing game with realistic physics and tight controls, as well multiple modes for you to enjoy. Complete events, enter tournaments, and start collecting victories against friends through local co-op, or online with Xbox Live!

With over 100 great games for one low monthly price, plus new games added every month, Xbox Game Pass is your ticket to endless play. Thanks for reading February’s Xbox Game Pass update and don’t forget: if you haven’t tried Xbox Game Pass yet, you can play free for 14 days.

For all the latest Xbox news, keep it locked to Xbox Wire. Until next month, game on!