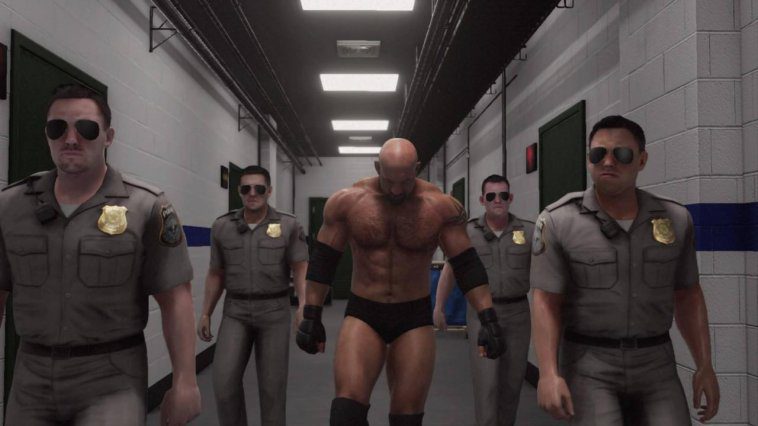 Spectacle and showmanship are as vital to professional wrestling as its storylines and in-ring action. Fans will fondly remember a Superstar’s distinctive mannerisms, or the pageantry of a glorious entrance, just as much as a five-star match. WWE 2K18 takes this aspect to heart with a substantial leap in visual fidelity–further complementing developers Yuke’s and Visual Concepts‘ adherence to wrestling authenticity. However, the game’s cosmetic advancements fail to cover up stagnant gameplay mired in technical issues.

WWE’s superlative lighting, character models, and motion captured animations bring each star of the squared circle to life with startling accuracy. And while there are some disparities between the poor saps at the bottom of the card and those at the very top, the gap isn’t as significant as it has been in previous years, with entrances remaining a dazzling highlight. Small details, like stretch marks and surgery scars, also contribute to WWE 2K18’s graphical showcase. Muscles are defined and flex when a Superstar heaves an opponent over their shoulders, veins bulge under the strain of submissions, and even Finn Balor’s demon paint gradually peels off over the course of a match. As a visual representation of the product we see on TV each week, it’s definitely impressive, and this devotion to realism extends to the gameplay, too. This is nothing new, of course, and if you haven’t enjoyed the series‘ methodical pacing and restrictive over-reliance on counters in the past, WWE 2K18 is unlikely to change your mind. This is essentially the same game as it was last year, with a few incremental additions edging the needle closer to the authenticity the series strives for.

Hot tags have been modified to be a more natural, momentum-injecting part of tag team matches, and a new carry system gives you more options on offence, allowing you to forcefully haul your opponent around the arena and execute a variety of context-sensitive actions with ease. This is particularly enjoyable if you’re playing as a giant like Braun Strowman, since you can hoist smaller opponents over your head and launch them directly out of the ring–which is certainly impactful in Battle Royales and the Royal Rumble. Speaking of which, eight-person matches are also new this year, adding an element of chaos to any over-the-top-rope shenanigans. The only downside is that so many Superstars duking it out at the same time has a negative impact on the game’s frame rate, with the slowdown enough to disrupt your timing on counters.

This isn’t WWE 2K18’s only technical issue either. While the AI is passable at best and dim-witted at worst, there are also myriad glitches spread throughout its various match types and game modes. From Superstars getting trapped inside inanimate objects and being teleported around the arena; referees not counting pins in eight-person tag matches; the Royal Rumble completely breaking due to Superstars failing to appear when their number is called; or the way the Elimination Chamber acts as a proverbial cooking pot for a concoction of ludicrous glitches, WWE 2K18 is a messy experience. Sure, a number of these mishaps are funny, but there are others that actively ruin the experience on a larger scale, whether it’s the game crashing every single time there’s a promo in Universe mode, or the way MyCareer struggles to keep track of your allies and rivals, even forcing you to wrestle yourself in championship title matches. This series has always suffered from its fair share of glitches, but they’re especially egregious and plentiful this year.

Meanwhile, MyCareer still tasks you with creating a character and climbing the ranks of the WWE, however, there’s still no option to create anything but a male wrestler, which is disheartening. Some light RPG elements do at least attempt to spruce up the action in-between matches, and you’re now free to explore the backstage areas, chatting to your fellow Superstars and picking up side quests that will further your alignment as either a face or heel, unlocking specific perks for each. The aforementioned glitches create problems here, however, as you might be asked to cut a promo on Enzo Amore, only to call out Cesaro instead, and then be told backstage that Dean Ambrose knew your plan. It’s a mess, and a struggle to keep track of. These backstage segments are overly lethargic due to the regularity and length of their loading times, which mean you’ll often spend more time watching the game than playing it.

This series has always suffered from its fair share of glitches, but they’re especially egregious and plentiful this year.

Beyond these issues, the writing in MyCareer remains its biggest problem. Even if you excuse the juvenile insults and complete lack of voice acting, there’s nothing here that carries any weight or interest. The writing lacks character and individuality, so it doesn’t matter who you speak to backstage. Bray Wyatt might be an occultist hillbilly with an anomalous promo style, but he’ll still speak with the same verbiage as Seth Rollins, who will in turn sound just like John Cena. And this carries over into the promos, too. These work much the same as they did last year, tasking you with picking from a number of dialogue options, and then trying to maintain a cohesive tone throughout to achieve a high score. The dialogue options aren’t quite as vague as they were before, so it’s easier to craft a coherent promo, but the terrible writing and silent pantomiming rob these moments of any impact. Last year, the promo system felt like a flawed first draft with room to grow, but there’s been very little progression one year later.

MyCareer’s online counterpart, Road to Glory, fares much better than its single-player brethren. By following the real-life WWE calendar, it allows you to take your created character online to compete against others in daily match types in order to earn enough stars to qualify for pay-per-view events. This adds some purpose and impetus to online brawls, and the netcode this year is surprisingly good, with smooth matches and no noticeable input delay, even when you bump it up to a fatal-fourway.

It’s fun seeing everybody else’s created Superstars, but customisation in MyCareer is disappointingly limited by the inclusion of loot boxes. There are no microtransactions in WWE 2K18, so 2K isn’t trying to urge you to part with more cash. But, honestly, that just makes this approach all the more baffling. The vast majority of customisation options, from hairstyles and T-shirts, to wrestling tights and even the vast repertoire of moves, are locked behind these loot boxes. You earn virtual currency throughout the game, and Road to Glory also has weekly loot boxes to unlock, but you’re still at the whim of a randomised draw. If you want a specific beard or a finishing move, you’re just going to have to hope luck falls on your side.

Fortunately, the creation suite outside of MyCareer is as exhaustive as ever, with everything unlocked from the get-go. You can tinker with every single facet of a Superstar’s design and create new title belts, custom matches, and arenas, and download other users‘ creations to, say, fill out the NXT roster with the likes of Adam Cole, Drew Galloway, and Kairi Sane.

WWE 2K18’s in-ring combat is fundamentally flawed, and will be as divisive as it often is. Yet there’s no denying the inherent joy derived from performing your favorite Superstar’s signature moves. Whether it’s cracking your opponent over the head with AJ Styles‘ Phenomenal Forearm, or pounding the life out of Asuka’s latest victim, there are moments of pure pro wrestling enjoyment to be found here. It’s just compounded by too many frustrating issues, disruptive glitches, and a dearth of engaging single-player modes. This series has remained stagnant for far too long, and WWE 2K18 doesn’t change things.