We’re incredibly excited to announce that Wintermoor Tactics Club is now available on the Xbox One! We’ve worked hard as a team to create a cozy-feeling game that appeals to both new players of the tactics genre and veterans alike. So, if that idea strikes your interest, we hope you’ll read on!

We designed every part of Wintermoor to convey a feeling called “hygge:” the cozy-comfortable feeling of a special moment where you feel content and safe, like sitting by a fireplace. We want to give players somewhere to hang out, a place filled with warmth and humor.

Our story centers around a young girl named Alicia. As one of very few black girls at Wintermoor Academy and a nerd to boot, Alicia often feels isolated at her school. Her oasis is the Tactics Club, where she finds comfort in playing the tabletop RPG “Curses & Catacombs” and supportive friends that share her hobby.

Alicia’s place of comfort is threatened when the school is thrown into a snowball fight, where all the clubs must compete and are disbanded if they lose. Alicia and her friends learn to take the game they care about and extend it into the real world, imagining the snowball fights as C&C adventures.

The tone of the game is meant to put players at ease: an earnest and surreal sense of humor, illustrated graphics that evoke storybooks, and a soundtrack that mixes indie movie vibes with late-90s RPG nostalgia. All of the elements of the game are designed to work together to make players feel like they’re curling up with a nice cup of cocoa and a good book.

Part of being welcoming is accessibility. Although our team really likes tactics games and are used to their challenges and complexities, we didn’t want to make a game that was only for veterans. Everyone has to start somewhere when approaching a new genre; it felt to us like the best way to share our love of tactics was to make something that anyone could play. After all, one of the main themes of our game is bringing new people in to enjoy your favorite hobby with you!

This goal guided many of our design decisions. First of all, we removed randomness from the gameplay. All the information that you need to make decisions is visible at all times: what actions enemies will take, how much damage they will do, and so on. There’s no need to memorize strengths and weaknesses, perform complex calculations, or remember huge stacks of stats. The game lays all its cards on the table so you can plan the best tactical move.

Second, we tried to truly intertwine the gameplay and story. Those who are already experienced with tactics games can gain rewards through extra-hard challenge levels, but players in it for the story can earn bonuses just as powerful by talking to other characters on campus and completing side quests.

Finally, we let players choose their own level of challenge. You can reduce (or increase!) enemy and player health through menu sliders. Players who enjoy combat can challenge our scoring system to try for max rank on each battle, and players who don’t can use a “no fail” combat mode with no negative consequences. Tactics games should be for everyone, so we wanted to make sure everyone could play.

A Story About Inclusivity

When thinking about the themes of our game, we decided we wanted to tackle a relevant issue: how the Internet can isolate people into like-thinking cliques, and engender an “us vs them” attitude that reduces human identity to being part of a tribe. So, naturally, we decided to set the game in the early 1980s.

The classic 80s sports movie is all about that “us vs them” attitude, with “nerds” or “underdogs” fighting to triumph over the mean cool kids. But… what if there are no cool kids? What if everyone is struggling and just trying to make their way in the world, and the real solution is not to beat them but to try to reach out and find common ground?

Inclusivity is not easy. It can be scary to try to welcome strangers into the sanctuaries where we feel comfortable. Wintermoor is about that struggle. In many conflicts, the bravest thing you can do is connect with others: try to understand how they feel, and help them see where you’re coming from. That’s why we chose a main character whose most powerful feature is her empathy. Although Alicia is shy and nerdy, she reaches out to the defeated members of other clubs. She tries to connect by sharing her favorite hobby, writing them custom Curses & Catacombs adventures to help them work through their personal issues.

We Hope You Enjoy

Thank you for taking the time to read about Wintermoor Tactics Club. In celebration of launch week, we’re running a 20% off discount on the game! We all put our hearts into making something that was both fun and meaningful, and we hope you enjoy it! 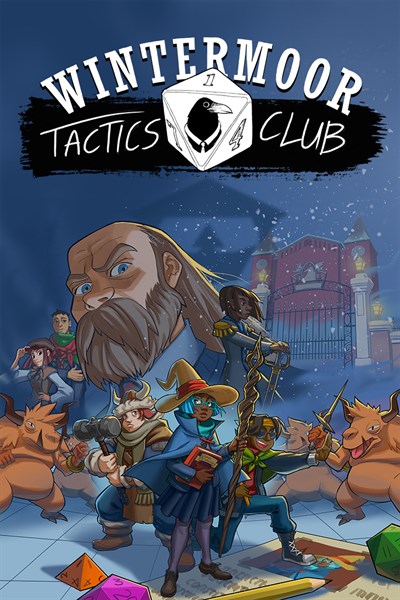 ☆☆☆☆☆
★★★★★
$19.99 $15.99
Get it now
Xbox One X Enhanced
Wintermoor Tactics Club is a story about surviving high school, with gameplay inspired by tactics RPGs and visual novels. It was hard enough for Alicia at the famed Wintermoor Academy before it erupted into a snowball war! Now her club's only hope is to transform from nerdy nobodies into fantasy heroes. Unravel a reality-bending mystery. Test your strategic mettle against an avalanche of colorful characters. And don't forget to make friends! • Unlock your Potential: Discover the power of 7 playable characters and dozens of unlockable upgrades across more than 40 battles. • Explore the School: Get to know Wintermoor in visual novel-inspired gameplay. Break down the walls between high school cliques such as the Psychic Detectives and Young Monarchists. • Make New Friends: Write tabletop campaigns to help students overcome their personal problems, and discover their fantasy selves as your club grows.

Related:
5 Tips to help you survive the uprising in Warsaw, Coming to Xbox One on October 2
Next Week on Xbox: September 15 to 18
Ubisoft Forward September 2020 Recap