Hi everyone,on behalf of everyone here at Dotemu, we are very happy to finally announce the release date for Windjammers 2!

Windjammers 2 will be available on January 20, 2022 for PlayStation 4 (PlayStation 5 via backwards-compatibility). Developing this sequel to the 1994 classic was quite the journey for us and we’re thrilled to only be weeks away from seeing you play it.

Thanks to the game community’s feedback, including from our PlayStation beta in August, we’re now ready to offer the sequel we’ve dreamt of making since we worked on the port of the original game back in 2016. This is the first game we’ve developed entirely in-house, so it’s extra special for us. To celebrate the release date announcement, we’ll talk a little bit about how we approached this sequel.

A sequel from the ground up

When working several years ago on the port of the first Windjammers game for PlayStation, we used our own emulation technology to provide an authentic experience for new players. This was not without challenges though, as it was our very first online game.

Porting the game gave us a glimpse of how the gameplay was built. It was always our intention to work on a sequel after the port, so we pushed our investigations even further. First, we tried to analyze the game frame-by-frame in order to recreate the movements of the characters and the disc, and most importantly the game feel. But our development team felt that they were missing some subtleties that were impossible to recreate this way. The solution then was to disassemble the original code and try to understand how it worked, in order to find answers – or as my colleagues called it, ‘archaeologist work’. Deciphering code from 1994 was key to capturing the essence of Windjammers! We also got help from the French Windjammers community, who tested our different builds to confirm that we were heading in the right direction for capturing the fun and authenticity of the original game. 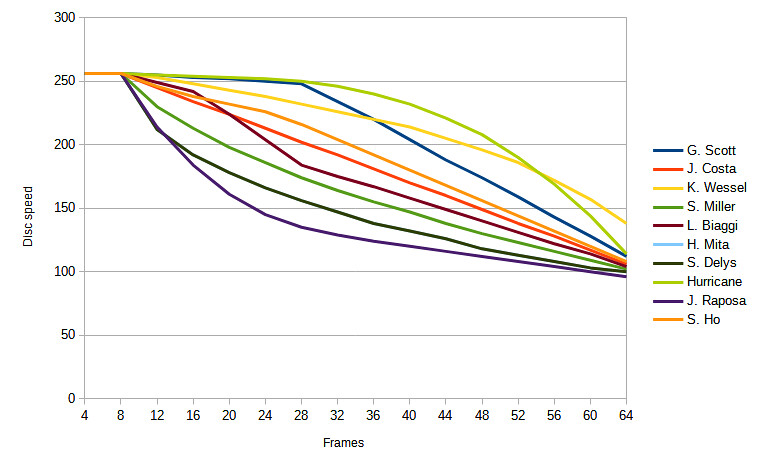 This graph shows the disc-speed data for every character, depending on the player’s timing.

The later you throw the disc back, the slower the disc-speed.

Initially we considered working with our engine on a ‘carbon copy’ of the first game and then adding further content and mechanics. But we ended up working on both things simultaneously in order to have everything implemented the right way and with the right balance. For example, it was quite tempting to add a lot of visual effects to the players’ shots, but we knew that visibility at all times was an absolute necessity. 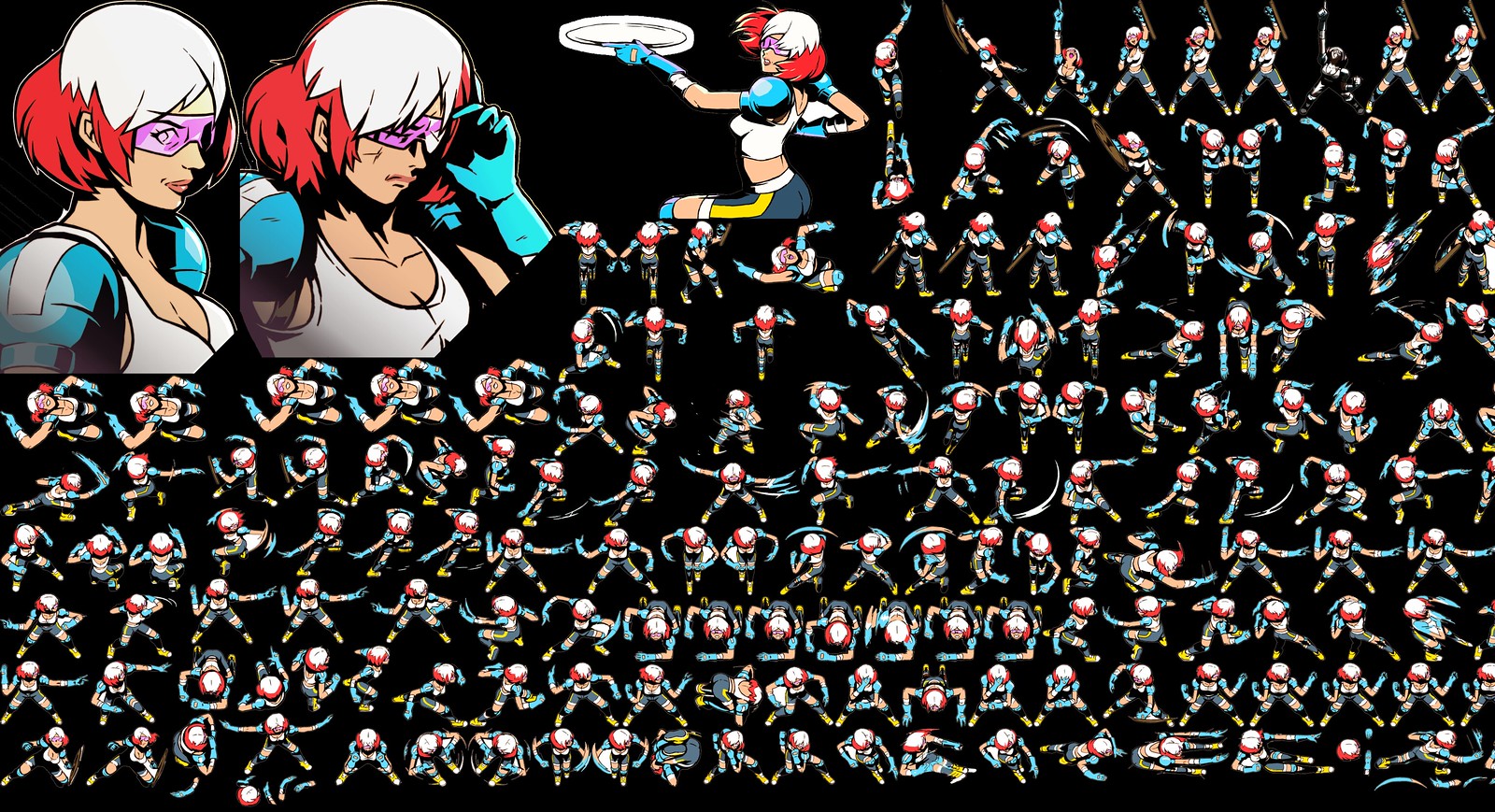 A closer look at Sophie De Lys, one of the new characters in Windjammers 2.

The first thing our production team did was develop new characters. We started with a French player (obviously!) called Sophie and then tweaked the existing roster’s stats to create new and interesting characters with their own abilities. Afterwards, new moves were added for every character: for example, in Windjammers 2 you can now jump to catch a disc while it is in air, or do slapshots and dropshots to catch your opponent off guard. With deeper gameplay than ever, no two matches are the same.

We took a similar approach to the courts. Going from 4:3 to widescreen allowed us to create even bigger courts – it was then up to us to mix up all of the different court features to create the best-possible levels. A personal favorite of mine is one of the new levels, the casino. Before each kick-off, the casino randomly selects the disc’s value: from one point up to… eight! This changes the course of the game quite dramatically, and timing your special attack here is critically important. 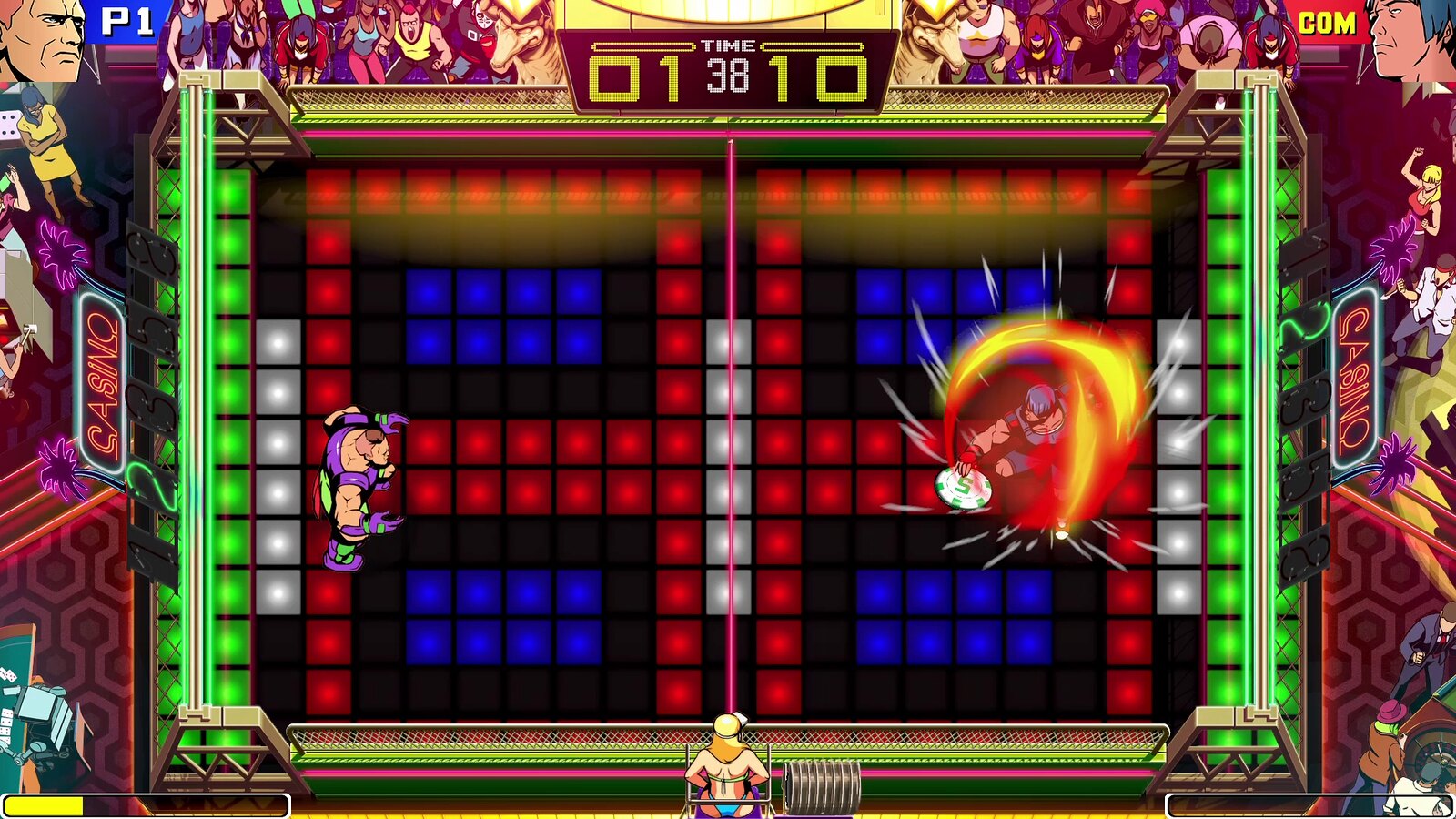 In sum, here is everything you’ll find in Windjammers 2:

Over the years, we’ve postponed Windjammers 2’s release multiple times to ensure it’s the ultimate sequel that the original game deserves. We are so thankful to our community for their continued support and we’re looking forward to seeing all of you on the court in a few weeks.

In the meantime, enjoy the holidays and let’s start 2022 with a bang when Windjammers 2 comes to PlayStation 4 on January 20.