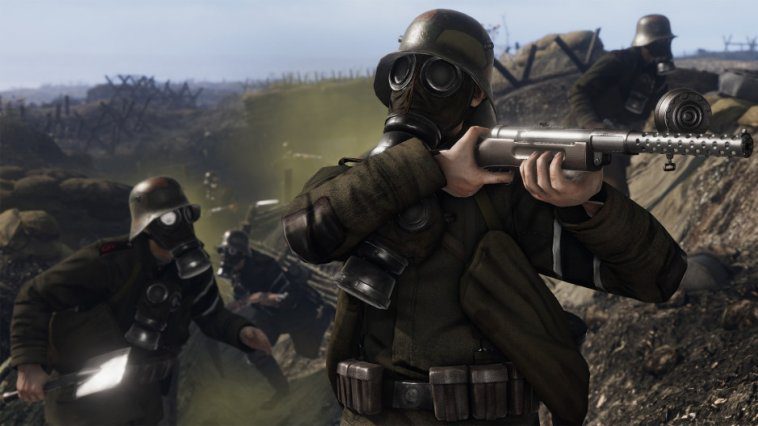 This is a hugely exciting day for all of us on the Verdun dev team. Anyone who has worked on a game will know that it never feels quite finished because there’s always more you could add, but we feel this remastered version of Verdun for Xbox One has been greatly improved, from the control schemes to a new user interface… and that’s far from all this remaster brings to the table. You also get revamped graphics, a new audio system and sound effects, AI opponents, a new map, new squads, and much more. The remaster is part of a whole new look and feel for the entire WW1 Game Series: everything from logos to the in-game artwork.

The first thing you will notice on starting the game is that there has been a complete overhaul of the user interface! The menus are now more atmospheric and visually appealing, and we’ve added localizations for Simplified Chinese, Japanese, Brazilian Portuguese, Turkish, and Polish. The new game logo better reflects the nature of Verdun and our WW1 Game Series. We have also gone over our control system with a fine-tooth comb to make it as user friendly and natural as possible, both in the menus and in the heat of battle!

There have also been several graphical improvements to the game and existing content. Character models have been improved, along with a ton of other little upgrades. We’re also proud of our revamped and improved sound effects in-game. The audio has been reworked with more satisfying and accurate sound effects, plus an updated soundscape for even more immersion when you’re fighting in the trenches. Where possible we worked with reenactors and collectors who own genuine WWI weapons to get the most authentic sounds possible!

Polish has been applied liberally throughout the game – for instance, there is an expanded gore system to better capture the sometimes shocking brutality of WWI battles, along with a bullet penetration system and tweaked barbed wire. Instead of getting caught up and dying, barbed wire will now only slow and injure you – so you still want to avoid wire, but you can force your way through in a pinch without worrying about abrupt death. There is also quality of life improvements like tutorial hints for new players, an improved spawning system, an enhanced deathcam, and more…

The remaster includes a new map and two new squads with new weapons! The new map is set on the St. Mihiel salient which saw heavy fighting during the Battle of St. Mihiel, when American Expeditionary Forces with French support attacked and defeated the German 5th Army. The French troops involved in the battle were from II Colonial Corps, which leads us neatly to the first of the two(!) new squads which are part of this remaster. The Senegalese Tirailleurs are a new French assault squad. Their distinctive machetes make them fearsome opponents in close quarters, and they’re no slouches at range when using their colonial variants of the Berthier rifle either.

The second new squad are the ANZACs – brought from the other side of the world to fight in the trenches of the Western Front. While Gallipoli is perhaps the most well-known battle involving ANZACs, they also fought with distinction in France. In-game the ANZACs are an engineering squad, representing troops like the 1st Australian Tunnelling Company who were engaged with digging two large mineshafts under Hill 60 in November 1916. They are well equipped with SMLE rifles and the Lewis Gun for fire support, but also include the unusual Webley-Fosbery – a recoil operated automatic revolver.

Last but not least, we have added bot support to the game! You can have up to 24 AI bots join your battles. They will happily battle using any squad on any map in the Frontlines game mode. AI NCOs will call in fire support, and they can be tenacious opponents on the defense. You can even start your own custom offline battles and choose which squads you want the AI to use!

Looking to the future, the console release of Tannenberg is making good progress and we can’t wait to share more news as soon as we have it. Until then…

Happy holidays from all of us on the WW1Game Series team!