This is our icebreaker of choice when showing our game Shadow Fencer Theatre at conventions. The typical responses are along the lines of “What a weird thing to say” or “What about my face says that?” or just straight up laughter, but it often jolts people out of autopilot and brings them into to our booth.

It sounds odd, sure… but hey, you’re still reading this! At this point we would say something like: “Shadow Fencer Theatre is our competitive awkward physics sword-fighting game set in the world of shadow puppets! Why don’t you jump in and try it out?”

Despite playing with shadows, there is quite a bit of depth to the fighting in Shadow Fencer Theatre. Your left joystick controls the hand holding your shadow puppet and the right joystick swings the puppet’s floppy fencing arm. The player that can best control their wiggling puppet and deliver a lethal hit wins that take. The first puppeteer to win by two takes wins the match and ends the scene. You can also choose to throw your sword to win a take, but you better be confident, because once you do, there are no takebacks.  When you realize you are not the grandmaster puppeteer you thought you were and lose your weapon, you can still get down to fisticuffs, but it’s not going to be easy.

Every character has the same reach from their hitbox to sword point, putting each character on a level playing ground. What makes every character unique are the variations between joints, limb lengths, and the size of their weapons. This gives advantages and disadvantages to each puppet and allows for a unique playstyle depending on who you select.

Long swords have more stability to the swing and provide a larger area to hit with. Throw it and miss however, suddenly your baby arms aren’t doing much to protect you. Just ask our city-destroying kaiju, Lizilla. If she loses her limousine sword, her tiny T-Rex-like arms leave her vulnerable. Conversely, our Gorilla character’s banana sword may be wobbly to swing, but after you throw it, your reach is still crazy long. 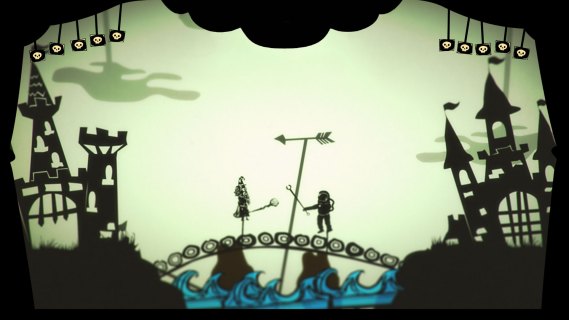 You know what? Because we like you, here’s a pro tip. If you need a little room to breathe when the swordplay gets intense, jab the puppeteer’s hand to cause your opponent to whimper and jerk backwards. Each puppeteer finds their own techniques for managing the awkward physics of our characters, so what will yours be?

If puppets attacking you wasn’t enough, the environment is out to get you as well. Each stage has unique elements that can affect the fight. Scenery, such as bats, arrows, tumbleweeds, and helicopters can get in the way of sword swings.  Large set pieces can help you hide from your opponent to get a cheeky sword throw in. Most importantly, pro tip #2, don’t fall off the boat!

Shadow Fencer Theatre is created by ShuddaHaddaLottaFun, a two-person dev team from the Midwest, and we are so excited to bring our premiere title to Xbox One. We met in college, working on sketch comedy rather than going to class, and then at some point in time we were like, “How about video games?” And now we do that.

We started out slow, learning the ropes by doing game jams. Then after many attempts, we made a game that people really liked.  Now just a little over two years later, Shadow Fencer Theatre went from a small jam game to a full featured game with a ton of characters, multiple game modes, and crazy awkward mini-games.

We are so excited to be finally launching our game on Xbox One, and we can’t wait for you to get out there and start poking each other. Poke your friends. Poke your classmates. Poke yourself. Best of luck puppeteers, the theater is calling for you, so go out and put on a great show!

Shadow Fencer Theatre is available now for Xbox One on the Microsoft Store. Click here for purchase details.

Related:
Riverbond Brings Co-op Craziness to Xbox Game Pass
Prepare to Rise and Survive in Code Vein on Xbox One
Burn Rubber and Shred Metal in Wreckfest, Coming Soon to Xbox One