Wow, a little over two years ago, three of us met at a pub to talk about this new game idea. Idea is actually an understatement. We had loads of ideas. Too many?

For us, the main reason to go indie was to make stuff that we love, and we weren’t going to waste it. When we left behind the huge teams, enormous budgets and relative comfort to go Indie, the main reason (by a long way) was to have the chance to make something closer to our hearts.

A smart person would maybe have decided to focus on a few of those things and abandon the rest. We’re not that smart. We decided that this hodgepodge of ideas felt like something different and interesting and something we really really wanted to do. So we decided to try and prove ourselves wrong.

Yep, we decided to prototype a permadeath-cover-based-twin-stick-comic book-horror-western title with procedural generation and light-based mechanics. Luckily for us, it all came together into our game West of Dead.

At the heart of West of Dead is the desire to have a western-style shootout, but with modern arcade sensibilities. We want you to deal with enemies all around you – in true twin-stick style but to also plan your movements and count your bullets behind cover. The entire game fits around this, tries to make you get into cover, and then get out again while dealing with lots of scary things from all angles. To bridge these two flavours of action, you are kitted out with a lot of tools to use, whether diving to avoid bullets, sliding into cover, or vaulting from one side of cover to another, there is always a route to safety. However, you’re pretty dangerous too — with a wide variety of weapons and abilities to discover as you make your way through; no two fights will feel quite the same.

Crawling from the shadows

Comic rendering styles have always been a passion for us at the dev team, and we wanted to bring gothic stylings to life – pick out gloomy shapes from a background of pure shadow. The creatures you face look their best when appearing from the gloom, so we made the process of lighting your way through the world a key part of the gameplay. Igniting lanterns allows you to better target enemies that are now more clearly visible, and also briefly stun enemies, allowing you a second to plan your next move.

We were really lucky to work with our old Bullfrog and Lionhead colleague Dene Carter to bring the world of Purgatory together. You play a mysterious stranger to Purgatory – “a shifting land shaped by the souls of the dead.” The story is told with the amazing vocal talents of actor Ron Perlman, an absolute fan favourite of ours! Fitting a story inside a roguelite structure is a novel challenge, and we had to think of the game as a series of spiraling adventures, each passing through common spaces to figure out how to make it all work.

Finally, we really wanted the world to feel sprawling. We quickly found that a custom procedural generation engine was the order of the day, and built it from the ground up. Gone are the grid paper layouts of procedural generated games of old, and in are dynamic, art-driven levels to explore. Every corner, a potential threat.

If you wanna follow our adventures at indie game studio Upstream Arcade – come say hi to us here: UpStreamArcade.com and Twitter.com/UpstreamArcade or read more about West of Dead here WestofDead.com. We hope you enjoy West of Dead, we certainly had a blast making it. Cheers from Adam and the indie devs at Upstream Arcade! 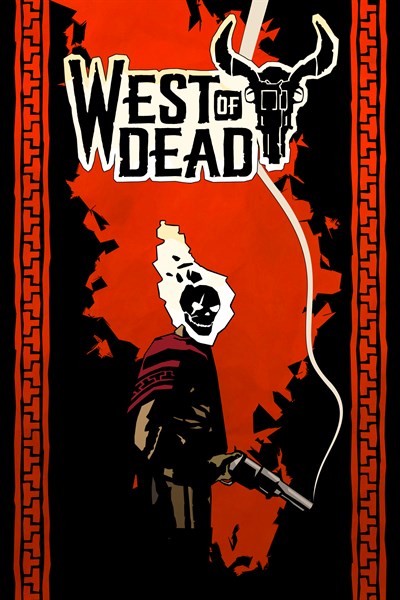 ☆☆☆☆☆ 18
★★★★★
$19.99
Get it now
Xbox Game Pass
Free Trial
Purgatory, Wyoming, 1888. A place of gun smoke and darkness, sin and damnation, wendigos and witches. A shifting, chaotic world that takes its form from the memories, culture or beliefs of the souls who pass through. When a dead man awakens with only the memory of a figure in black, he sets into motion a chain of events that have truly mythic consequences. Step into the boots of the dead man William Mason (voiced by Ron Perlman) and descend into the grim and gritty world of Purgatory in this fast-paced cover shooter which combines the fluidity of twin-stick controls and tactical cover usage. Put your skills to the test – Dodge behind cover as you try to outgun your enemies in the unknown procedurally generated hunting grounds. The Wild West has never been this dark.