It’s time to join us on a journey through the underbelly of modern-day Paris.

You were working the night shift, as usual. A passenger has just left your taxi. That’s when it happened. You were attacked by a serial killer and left to die in the streets of Paris. You survived. Your passenger didn’t. Now you have seven nights to help the police find the killer, or they’ll pin it on you.

Night Call is a strong narrative experience where you take on the role of a taxi driver coerced into finding the truth. On streets of Paris and in the back of your cab, you’ll encounter denizens of the city each with a story to tell. Some passengers detail whimsical lighthearted moments, others peculiar and thought provoking, and a few will come into the backseat with very dark accounts exploring themes not often seen in games. As you decide which passengers to pick up and guide the conversations with them, you’ll craft your own unique narrative and personal journey.

We like to think of Night Call as a game that rewards the player for making connections and seeing the strands between the clues your passengers drop in the conversations.

We’re excited that Night Call is now in the hands of players on Xbox One, with the added bonus of being in the amazing Xbox Game Pass program. We love hearing from the Night Call community on Discord and Twitter about their stories and experiences so please reach out to us with your thoughts and theories!

Start your shift; it’s going to be a long night… 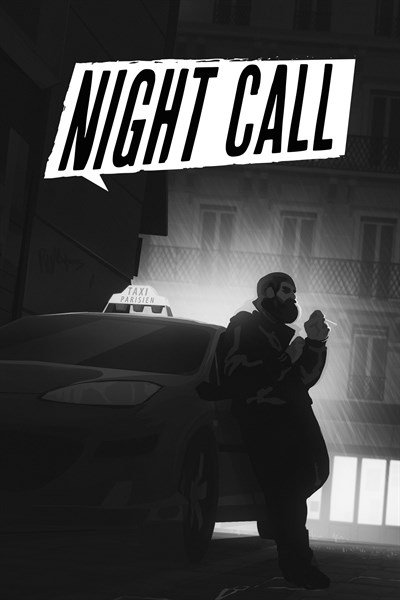 ☆☆☆☆☆ 46
★★★★★
$19.99
Get it now
Xbox Game Pass
A mysterious serial killer stalks the streets of modern-day Paris. The body count rises, and the police are no closer to catching the culprit. You are a taxi driver and survivor to the killer’s most recent attacks, having barely escaped with your life. You have seven nights to help find the killer, or the police will pin it on you. These next few shifts will be far from ordinary or safe… Night Call is a narrative-driven noire investigation game. You are no detective, but you do have a gift. Around you, people feel more at ease. They talk. They share their thoughts, their emotions, their stories… their secrets. To passengers, you are more than just a driver; you are also a friend, a confidant, a shrink. A voyeur catching a glimpse under the masked but very real lives throughout the City of Light. And you’ll need to play these roles well if you want to catch the killer. Use the limited time you have available each night to gather clues while earning money to pay your bills. Drive passengers to their destinations, hear their stories and choose your responses carefully—some are just regular people with a tale to tell, while others might reveal a clue that’s key to your investigation. Follow the right leads to uncover new info about the suspects, and don’t forget to make enough money to buy gas and pay your bills. Can you solve the mystery before it’s too late? Better hurry—both the clock and the meter are running…

Related:
Path of Exile: Harvest Available Now on Xbox One
Take Your Imagination Out of This World with Tracks – The Train Set Game: Sci-Fi Pack DLC
Playtest Hotshot Racing on Xbox One June 26 – June 29!