Following on from our recent announcement that Raspberry Pi 4 is OpenGL ES 3.1 conformant, we have some more news to share on the graphics front. We have started work on a much requested feature: an open-source Vulkan driver!

Standards body Khronos describes Vulkan as “a new generation graphics and compute API that provides high-efficiency, cross-platform access to modern GPUs”. The Vulkan API has been designed to better accommodate modern GPUs and address common performance bottlenecks in OpenGL, providing graphics developers with new means to squeeze the best performance out of the hardware.

The “first triangle” image is something of a VideoCore graphics tradition: while I arrived at Broadcom too late to witness the VideoCore III version, I still remember the first time James and Gary were able to get a flawless, single-tile, RGB triangle out of VideoCore IV in simulation. So, without further ado, here’s the VideoCore VI Vulkan version. 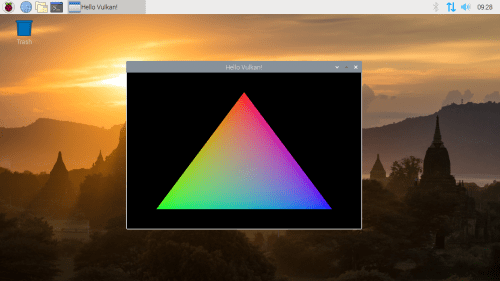 First triangle out of Vulkan

Before you get too excited, remember that this is just the start of the development process for Vulkan on Raspberry Pi. While there have been community efforts in the direction of Vulkan support (originally on VideoCore IV) as far back as 2018, Igalia has only been working on this new driver for a few weeks, and we still have a very long development roadmap ahead of us before we can put an actual driver in the hands of our users. So don’t hold your breath, and instead look forward to more news from us and Igalia as they make further development progress.