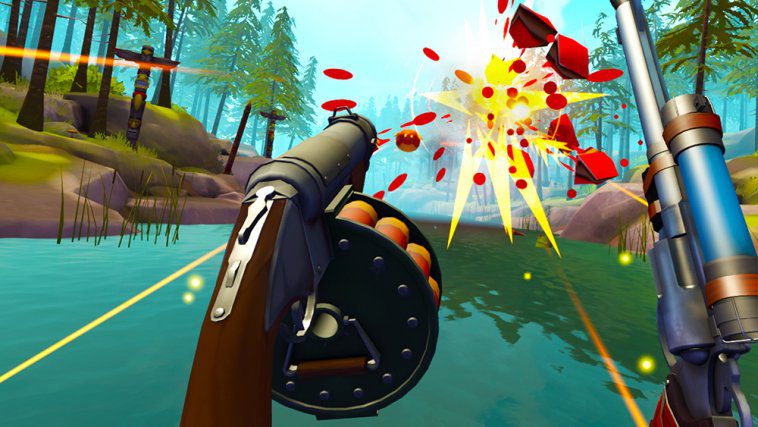 Virtual reality can provide users with experiences impossible to have otherwise. Taking a walk on the moon, shrinking down to learn up close about the human body, crafting amazing animated works of art at the flick of the wrist, you name it! But it can also provide hilarious and addictive gameplay experiences that just wouldn’t be the same without that extra sense of immersion. We sat down to chat with Bolverk Games, makers of Kittypocalypse and the recently released Dick Wilde 2 to hear how they bring hardcore arcade gameplay and humor together for in an awesome cocktail of hilarity.

Tell us a bit about yourself and the Dick Wilde team

I’m Bo Bennekov, CEO and co-founder of Bolverk Games. We’ve focused on VR games since before the first goggles hit the market. Our team is now 10 people strong, with our third title Dick Wilde 2 launching today!

What inspired you to create the wacky and colorful wave shooter Dick Wilde?

Dick Wilde was a VR title from the get-go. We’ve always been more than a little obsessed with Youtube videos of Americans fishing for Asian carp in the Southwest. They were using everything from bow and arrows to dynamite!  We couldn’t find a reliable dynamite salesman in Copenhagen and our bow skills were not quite up to snuff, so we decided to do it in VR instead. 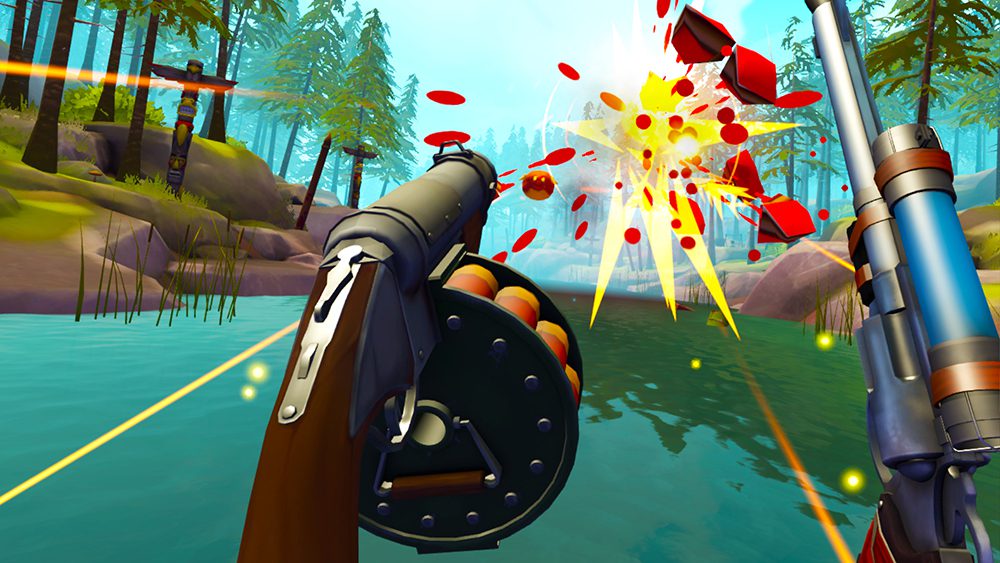 Kittypocalypse was a labor of love for me, since tower defense is one of my pet peeves. Strategy games lend themselves to VR really well, because you can have an unprecedented overview of the battlefield, and at the same time see every little detail. We learned a lot from developing Kittypocalypse, and used those lessons learned to make the first Dick Wilde VERY fun.

What new features and additions can fans of the first Dick Wilde look forward to with Dick Wilde 2?

Dick Wilde 2 is on rails, meaning that you are sailing down a river with a changing scenery AND you get to do it with a friend or stranger with the cross platform co-op. The whole progression system is built from the ground up, and features unlockable keys, stars, weapons and hats. (hats are used as multiplayer bragging rights. You have to ace a level to get the level hat) 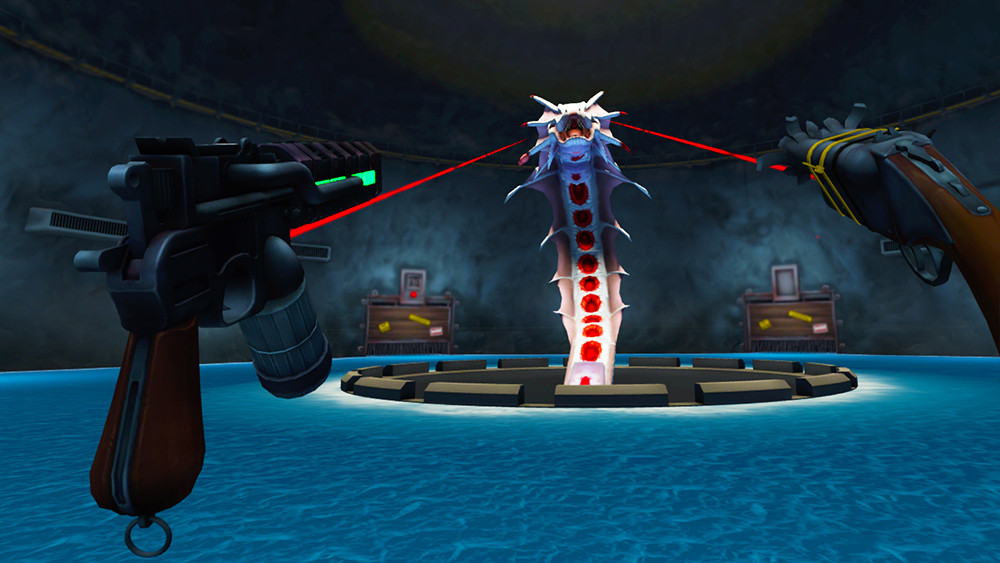 The setting and tone of Dick Wilde is a humorous take on rural swamp life, featuring the wacky denizens of an undisclosed countryside, evoking images of the American South for some. Was this an intentional influence on the game’s universe or is the motif something more universal?

It was very intentional, and inspired by the carp fishing mentioned above. We really like working with this narrative, and the lines almost write themselves.

What motivated your team to return for another crack at the Dick Wilde series?

We have quite a following on Dick Wilde 1, and many requests from the community about things they would like to see in a sequel. We had a good chat with our publisher, PlayStack, and decided to give the community everything they were longing for in Dick Wilde 2. 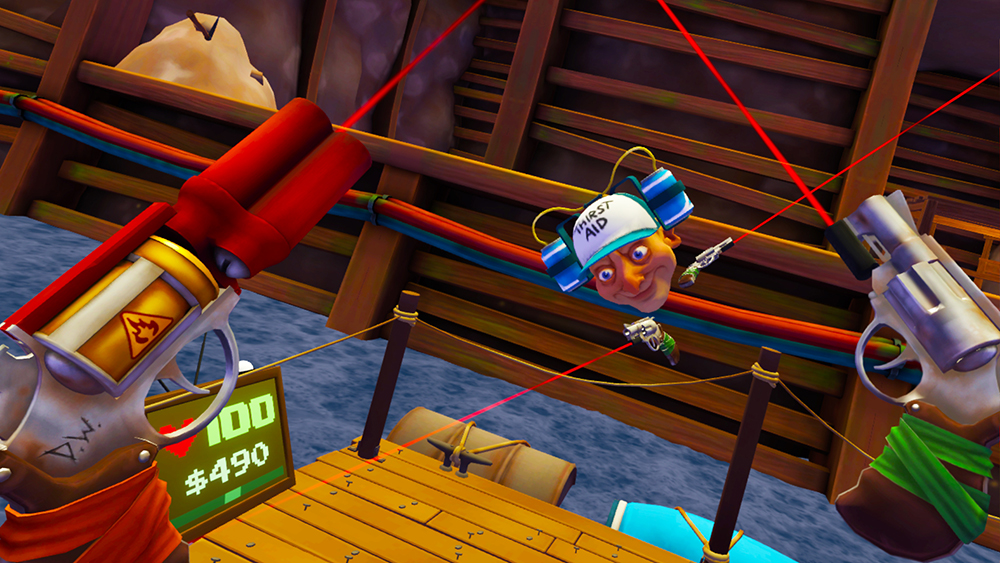 Dick Wilde 2 features cross-play functionality over many VR headsets including Oculus Rift. Can you speak to how difficult this was to implement, and how important it was for you that players be able to play together regardless of hardware?

It certainly came with it’s set of challenges, but we feel that VR really needs multiplayer sessions to work at any given time. We felt that we had a significantly better chance of finding the audience of everyone could contribute to filling the games.

Were there any weapons/levels/game modes etc that you wanted to work into the series but had to leave on the cutting room floor?

Yes. A lot of them. My biggest regret is that the drone strike launching pistol had to be cut due to only being fun on paper.

Dick Wilde is a hilarious take on the genre. How important is humor to the projects you develop and how challenging do you feel it is to incorporate humor in satisfying ways in VR?

We like to laugh, and we like games that don’t take themselves too seriously. We like to mix in crazy ideas alongside a strong focus on the core gameplay. Games should be fun in multiple ways, and pose a challenge to the player at the same time. 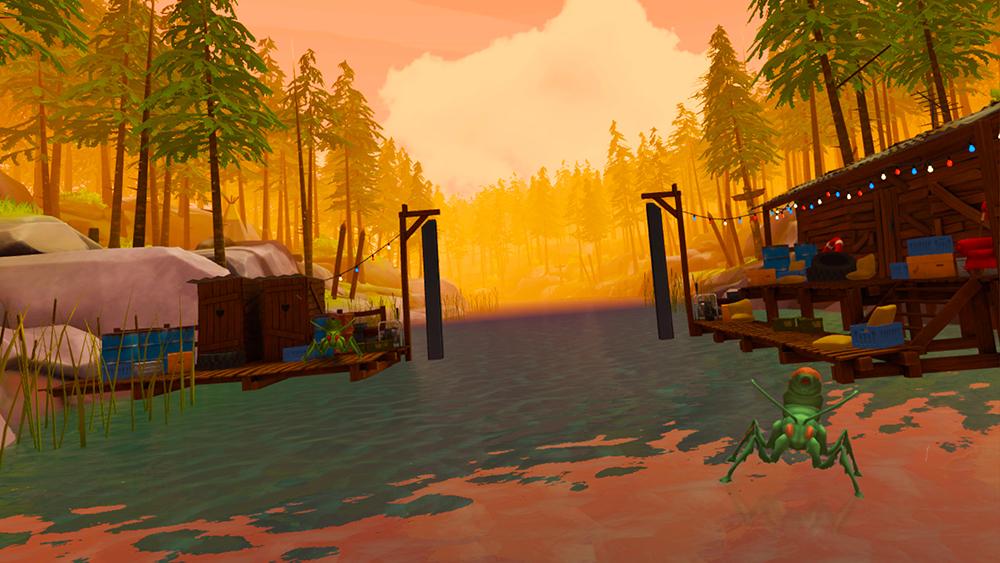 How has player feedback helped shape your projects? Have you been surprised by any particular responses from players?

Currently our projects exist in this middleground between the casual and hardcore games audiences. We were surprised to come to this realization and how people react to it. Many people like Dick Wilde 1 because it is hard, and many people found it frustrating for the same reason. Player feedback has shaped Dick Wilde 2 immensely. We have features in the game literally designed by the community from places like Reddit.

Is 1800 Critters a real number? Dare I call it and summon a trigger happy bumpkin?

Hilariously enough, it once belonged to an exterminator in the United States, but is now disconnected. We are trying to buy it.

How many people helped make Dick Wilde 2 and how long was the development process?

Development time was about a year in total, and our full team of 10 were on board throughout.

What are your thoughts on the future of VR and AR and where do you hope to see the technology develop going forward?

Oculus Quest and the Vive focus are the way forward. Cutting the wires out and bringing down the cost of entry will signal the next era of VR. We need generation two of the standalone headsets to run at GTX970 speed, and the it is TO THE MOON!

What’s next for Bolverk Games?

We have a ton of plans, but we’re not ready to announce them just yet. Stay tuned!

That’s exciting to hear! Thanks for taking time to speak with us