VA-11 Hall-A: Cyberpunk Bartender Action came out three years ago and I still can’t believe it. All the opportunities that have come our way, all the help we’ve been able to give to those we love thanks to it, all the support we get every day from everyone. It all still feels unreal, and now the game is going to be on PS4 this May!

In case you’ve never heard about VA-11 Hall-A: this isn’t a game about glamorous heroes toppling governments in a cyberpunk future. You assume the role of an ordinary bartender named Jill Stingray, who listens to the tales of strangers and regulars at the VA-11 Hall-A bar while she mixes drinks for them. Characters react differently depending on what drinks they were served and how much alcohol they’ve had — and you’ll learn about the dystopian place they all live in, Glitch City.

I wanna go into some spicy lore about Jill’s boss at VA-11 Hall-A, Dana Zane. Now, Dana is a character that predates Sukeban Games itself. Her origins can be traced back to being the mascot from an old blog my co-founder Christopher had. Dana’s role remained even after said blog got reiterated and even after we started making games. We saw fit to make her, if not the protagonist, at the very least a notable face in the production of VA-11 Hall-A.

Being a “mascot” of sorts, Dana has always reflected Sukeban Games as a brand, even before we were called Sukeban Games. One of the driving forces behind what we do is a constant feeling that we don’t belong in regular circles. Be it gaming, anime, or whatever, we’ve always felt like outsiders whenever we try to fit into the regular hobby circles. So we’ve tended to carve out our own space where we can be ourselves with no problems.

As such, Dana has always had a rebellious streak to her, geared towards the core principle that if the world wasn’t gonna accept her, she would happily carve out her own space in the world, welcoming anyone that feels like they don’t belong out there.

Dana’s role as the representation of what Sukeban Games signifies is even reflected on the company name. When the time came to pick a company name, we knew we wanted something that would reflect Dana as a character, that would encapsulate her rebelliousness and deeply punk attitude. And so “Sukeban Games” was born. 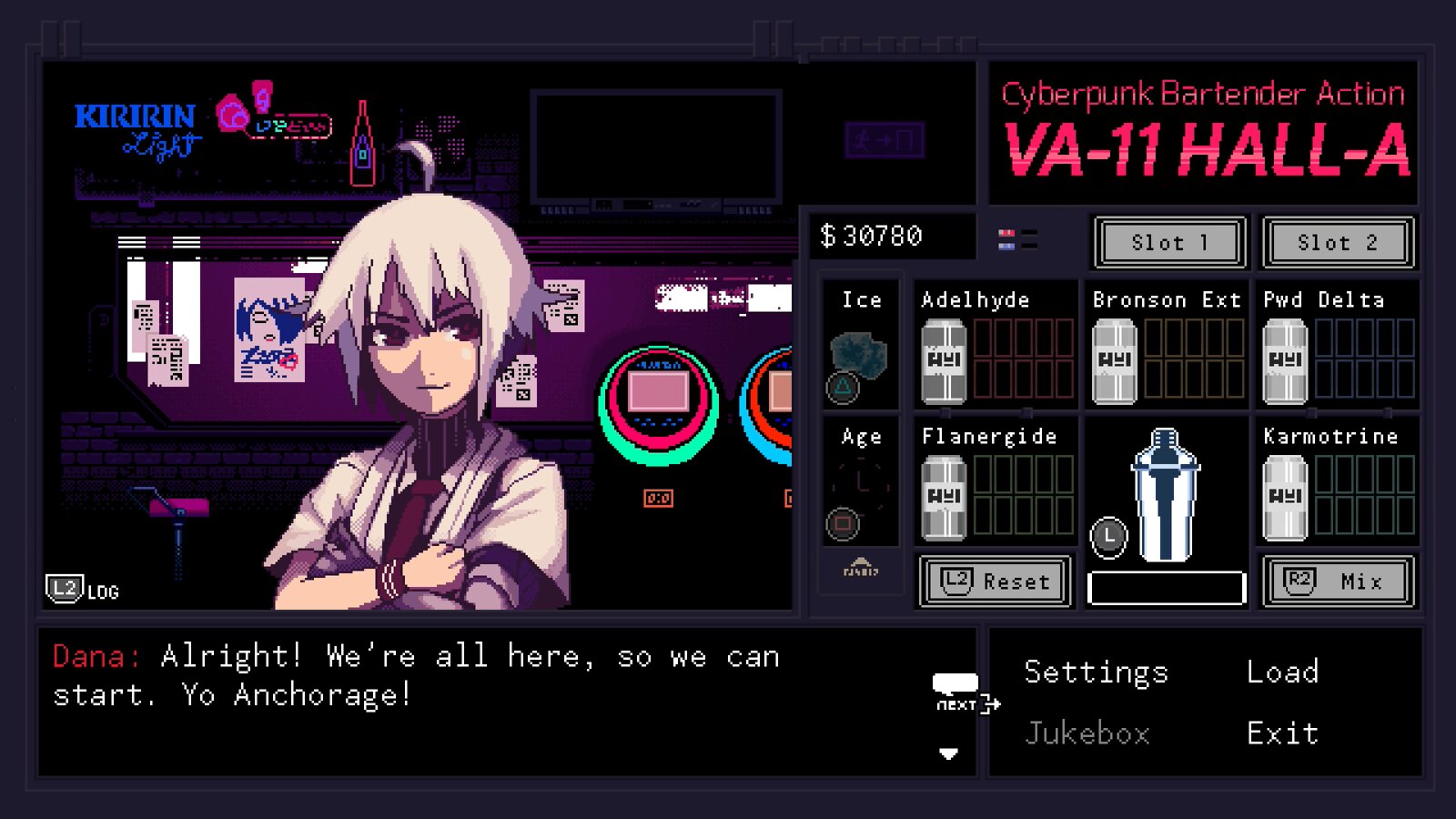 We wanna highlight that Dana in VA-11 Hall-A is a more mature version of herself. We have a huge desire to explore Dana at the height of her reckless and punk nature. VA-11 Hall-A’s Dana is a glimpse into a future where she’s been to hell and back, only to return stronger and more inclusive than ever.

Sukeban Games as a team has been through a kind of hell too, if you know what’s up with our home country of Venezuela. Still, if you told me five years ago that the game we made for a game jam would be on consoles everywhere, I would’ve probably been annoyed at you pulling my leg. But VA-11 Hall-A is now a reality, our reality, and we will forever be thankful to everyone that has supported us all the way through the tough times and more.