The holidays are almost here – the countdown is well underway, both IRL and in Tracks – The Train Set Game! Our free Advent Calendar Update is out now, with new items and decorations to unlock every day up to 24 December.

Don’t worry if you’re yet to play the update: all previous days are still available to be opened/unlocked. Today I want to give you a quick look at just a handful of the many new decorations included in the update and give you a few ideas to get your creative juices flowing.

First though, a quick recap on Tracks – The Train Set Game for those of you who are yet to jump aboard! Tracks is a calm, cosy toy train set builder which gives you the tools to play without limits. Open the toybox to discover a huge array of decorations, passengers, animals and buildings, build your world and then jump into the driver’s cabin to see it all to scale. If you’re yet to play, you’re in luck! We’re currently offering a 67% discount on Xbox as part of the Family Time Sale.

We couldn’t launch an Advent Calendar Update without including Santa’s sleigh! Why not place it under a Christmas tree or on a shelf? Tracks allows you to place decorations in the air too, so you could even place the sleigh in the night sky!

One of the new passengers you’ll unlock is the snowman! Turn on snow to add a light, fluffy layer of white to your toy worlds, and the new snowman passenger type will look right at home. Why not accompany them with reindeer or even Santa himself?

With this update we also wanted to introduce more decorations which can be used year-round, rather than just for the holidays. One of these new additions is the spiral bush – this can add variety to your gardens and parks – or why not spruce up your towns by putting them outside shops?

Even in the world of Tracks there’s plenty of roadwork and construction sites. We’ve added the Steamroller, which fits right in with warning signs, rocks and workpeople!

While pandas may not be the most traditionally festive animal, they’re adorable all the same. Why not set up a zoo, where the pandas can live alongside other furry friends? Or how about out in the wild? The choice is yours.

This is just a handful of ideas, and a look at just a few of the new decorations available in the Advent Calendar Update! The update is free for all Tracks players, and is available now, so why not jump in? 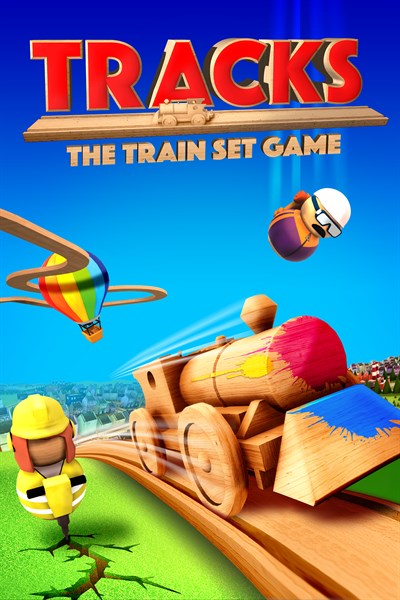 ☆☆☆☆☆ 167
★★★★★
$19.99 $6.59
Get it now
Xbox One X Enhanced
Tracks is a beautiful toy train set builder which gives you the tools to play without limits. Jump into an expansive sandbox and lay down track pieces, create bridges and build towns with Tracks’ easy to get to grips with gameplay. Once you’re ready, hop into the driver’s seat and ride your little train in first-person view – controlling the speed and direction, as you ride the rails. Jump into the Ultimate Toy Sandbox Start with a pre-made environment, be it a modern lounge or a night time Winter wonderland or jump into an entirely blank world canvas. Add trees and foliage from various world biomes, buildings, stations, animals, vehicles, decor and more. Customise your world further by altering terrain and fog colours. Make your train your own, selecting colours and patterns. Play with boosters, musical bells and ramps to make your train set an exciting ride! For a more complex railway system, add junctions and even introduce multiple trains. Build the Train Set of Your Dreams From sprawling green countryside to desert towns, and atmospheric foggy industry sites to vibrant circus setups, countless options await you and your train set. Let your imagination thrive and build the toy train set of your dreams.

Related:
This Holiday Season, Sam & Max Are Going to Hell
Ever Forward Brings a Mysterious Puzzle Adventure Today to Xbox
Crazy Athletics Is Available Now for Xbox Series X|S, Xbox One and PC