After a long slumber at the bottom of the sea, the Cursed Captain has finally returned to the shores of Novastraia with their spectral crew of no-gooders, as well as a host of new pet friends and a ton of new treasure to decorate your fort with.

The captain is a vestige of a time long past. A time where pirates had claimed the high seas. A time where the silhouettes of their immaculately carved bows drove fear into the hearts of all. A time before the Empire rose to power and sank or imprisoned them all.

No one really knows what the captain’s part in all of that was, however. Some say that they were a cutthroat pirate who was motivated only by their massive hoard of treasure. Others say that they were a true debonair of the seas, who had fallen in love with the princess of some far off land. And the ones they call crazy claim that they were a noble admiral, coerced into an infernal pact with a fearsome sea beast.

The only thing that was consistent in all of these retellings, though, was that the Captain was a formidable adventurer and warrior; tearing through the battlefield with a smirk and blasts from their trusty two-handed cannon.

Even though the new act unfortunately never made it to shore, the Cursed Captain was too fun of a concept for the team to pass up. Not only did the thought of a cursed pirate captain ooze with theme and style, but it also provided an opportunity to add a true summoner class to Torchlight III.

The original inspiration of the Cursed Captain came from the idea of merging a necromancer with a pirate. The Torchlight franchise has always been haunted by an ensemble of ghosts and spirits, so the thought of having an undead sea captain who summons a spectral crew of scallywags, felt right at home. And in order to truly highlight the captain in all their otherworldly glory, the team decided to remove the helm slot to allow players to highlight the haunting customization options available to them. It also allowed them to create new gear that felt truly unique to the idea of a pirate captain, that being a cape and a powerful two-handed cannon.

The Cursed Captain is a true dual threat. As an experienced captain of both cursed and piracy skills, this corporeal spectre can summon a ghostly crew of swashbucklers, as well as utilize the tools of the trade to tackle combatants. You’ll have two unique skill trees that you’ll be able to spec into and evolve along your journey.

The Cursed Captain is at their best when they engage enemies with their summons first, and then sweep in to finish them off with a blast of their cannon or a deadly blow from their twin sabers.

The Cursed Captain isn’t the only thing arriving with the Spring Update. There are also four new species of pets and over 40 new pet variants! Some of the new species you can plan on meeting are Shiba Inu, Fox, Stag, and Bulldog.

And for all of you interior decorators on the Frontier, there will also be a bevy of new fort items added to the new Fur and Fashion contract, like the Netherim Specimen, Fox Arch, and the King’s Gazebo.

We look forward to everyone being able to get their hands on the new Cursed Captain class, as well as the new Fur and Fashion contract additions, when the Spring Update drops for free on May 25! 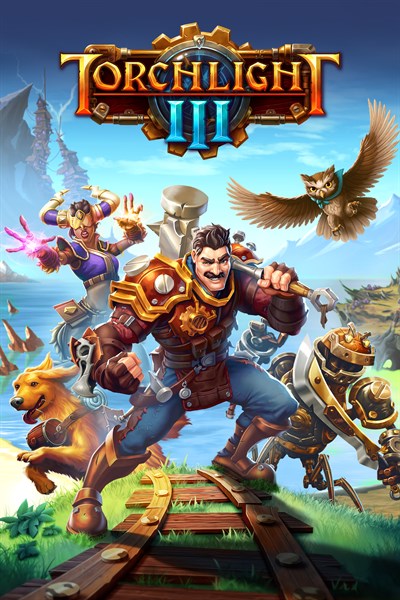 ☆☆☆☆☆ 107
★★★★★
$39.99
Get it now
PC Game Pass
Xbox Game Pass
It’s been a century since the events of Torchlight II, and the Ember Empire is in decline. In Torchlight III, Novastraia is again under threat of invasion and it’s up to you to defend against the Netherim and its allies. Gather your wits and brave the frontier to find fame, glory, and new adventures! Travel the Frontier – Brave the vast wilderness of Novastraia and all of its dangers either alone or with a group of friends!  Collect Epic Gear – Whether it’s armor, weapons, or even new pets…there’s always more to find as you battle through dungeons and take on dangerous foes.  Build Your Hero – With four unique classes to choose from and five available Relic subclasses, there are many different ways to build your hero and maximize your damage. You’ll also gather epic gear along your journey that you can customize to work with your hero’s unique make-up. Build & Upgrade Your Fort – It’s time to rebuild – and that includes you! Enjoy your very own fort, where you can upgrade gear and renovate your fort to show off to your friends and the world. Pets Are Back – Fight your way to fame and glory with your loyal companion! Add skills and equip them with gear to make them stronger. Each species comes in a myriad of colors and styles, so make sure to collect them all!