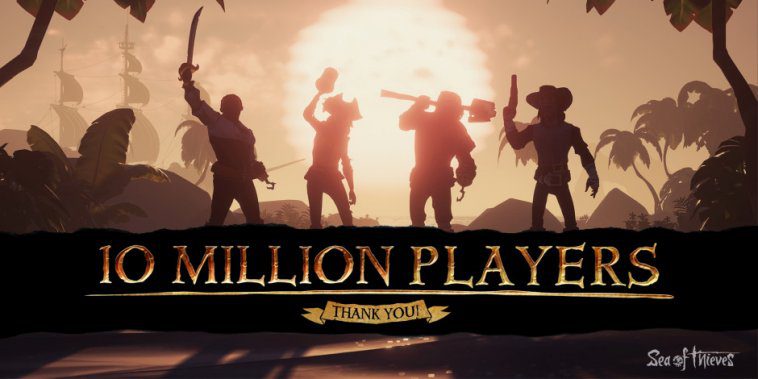 Rock Band Rivals Welcomes You to 2020
Happy New Year! With every new year comes a list of resolute goals, dreams, regrets – things you wish you did better, or different, things you love and want to keep doing forever. Rivals Season 15 will celebrate those resolutions with 8 weeks of carefully curated challenges, each focused on a particular aspect of goals for the New Year… Read more

Sea of Thieves Passes 10 Million Players Since Launch
We’re excited and humbled to share that Sea of Thieves has now been played by more than ten million players, reinforcing its status as the most successful new IP from Xbox this generation. It’s mind-blowing to think of that many people setting sail on the Sea of Thieves, and it’s all been made possible by the support and passion of our fantastic community… Read more

Free Gifts in Celebration of DC Universe Online’s Anniversary
First off, we’d like to thank our Xbox One players for making DC Universe Online in 2019 so memorable! Dark magic emerged early in the year with Episode 34: Justice League Dark. Then players repelled the invasion of the Dark Multiverse in Episode 35: Metal Part I and are still defending Earth as we know it in Episode 36: Metal Part II… Read more

Tekken 7, Frostpunk, and Sword Art Online: Fatal Bullet Coming Soon to Xbox Game Pass for Console
Happy New Year! Time for those resolutions. I promise for 2020, I will not get sucked into an MMO and lose my body in the real world. I will build the last city on Earth. I will probably not get caught up on my pile of games, but I will at least prioritize what games I want to play next. I will try to play more with my friends so we can all geek out about these games together… Read more

Mistress of Blade Coming to Black Desert on Xbox One
A small and hidden village of the Oeki Clan that resides alongside the banks of the Turina river gives birth to the newest class in Black Desert, Kunoichi. Trained at a very young age to master the use of a shortsword, kunais, and the hidden arts of Ninjutsu, Kunoichi has the ability to swiftly and silently dispose of her enemies… Read more

New with Xbox Game Pass for PC: Frostpunk, FTL: Faster Than Light
Story time. A few weeks ago, while we were all sitting around a giant pile of gifts and wrapping paper, my kitten was losing her mind, darting from pile of paper to ribbon to making loops around the tree. It was like an avalanche of fun. Well, I feel you little kitten, because being overstimulated by so many exciting new toys is totally me right now… Read more

Paladins Season 3 Begins with New Champion Release, Community Battle Pass
Paladins had an exciting year in 2019 – we released four new champions, a variety of exciting Battle Passes, and a series of updates which brought more bug fixes and quality of life improvements than ever before. We declared 2019 the best year ever for Paladins, and we think we achieved our goal. But we’ve never been comfortable resting on our laurels… Read more

Next Week on Xbox: New Games for January 15 to 17
Welcome to Next Week on Xbox, where we cover all the new games coming soon to Xbox One! Every week the team at Xbox aims to deliver quality gaming content for you to enjoy on your favorite gaming console. To find out what’s coming soon to Xbox One, read on below and click on each of the game profiles for pre-order details (dates are subject to change)... Read more

A Rambler’s Guide to Kentucky Route Zero: TV Edition, Coming to Xbox One January 28
Kentucky Route Zero is a magical realist adventure game about a secret highway that runs through the caves beneath Kentucky. The three of us at Cardboard Computer have been working on this game for almost 10 years, publishing episodes, free ‘interlude’ games, and other odd objects (a play, a T.V. station, a hotline for secret tourism) as we go… Read more