Can you juggle? I can’t. Tried multiple times, but it never took. Something about introducing that third ball into the equation just made my brain lock. And I’m convinced that inability is cause for the bead of sweat breaking out across my brow so early into my Moss hands-on session.

Let me explain. With L2 I’m holding a triggered Ticker under my sway. This mechanical insectoid is a denizen of the mine I find myself in, just one of an endless spawning, skittering army that explode upon sensing an intruder. That intruder isn’t me, but my mouse companion Quill. She’s wandered into this puzzle room, full of fatal drops, hidden levers and multiple pathways, at my behest. It’s just one of many in this underground labyrinth that we’re exploring.

Her would-be attacker is grossly swollen, ready to pop. But won’t, unless I release my grip. It’s one of my powers as a Reader: a towering, benevolent in-world spirit awoken by Quill at the adventure’s start. I’m watching over her travels from on high, but can at any point lean in close to get a closer look at her surroundings… or just go nose to nose with my mousey friend. 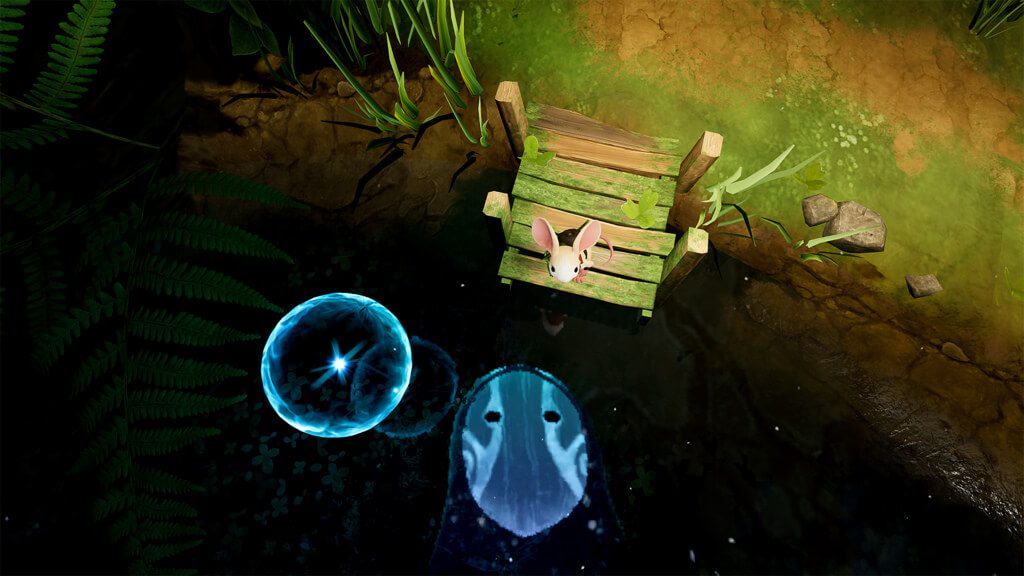 Reach out and hold Quill for a few seconds to heal her. Cool detail? The rapid thrum of her heartbeats that’ll radiate out through your Dualshock 4.

By angling the Dualshock 4 I can direct the Ticker towards ones of the room’s switches that, once activated – by loosening my grip and letting the Ticker’s nature take its course – will operate pulleys and ultimately a certain moving platform. (I’ve utilised the same trick to first expose the lever by blowing up a stone wall that hid it.)

Simultaneously with the left stick, I guide Quill the other way, towards that platform. I help her slash through some Tickers, dodge others then climb up and over ledges. At the same time I’m double-checking via my peripheral vision if triggering this lever, standing on that platform will get Quill across the abyss. I’ll admit: I’m struggling.

Yet a few minutes later as a surviving Quill reaches the room exit, I feel a small glow of satisfaction, a heightened anticipation for what puzzle comes next.

I also feel surprise. Surprise that this slick-looking PS VR puzzle platformer has such a strong undercurrent of complexity. 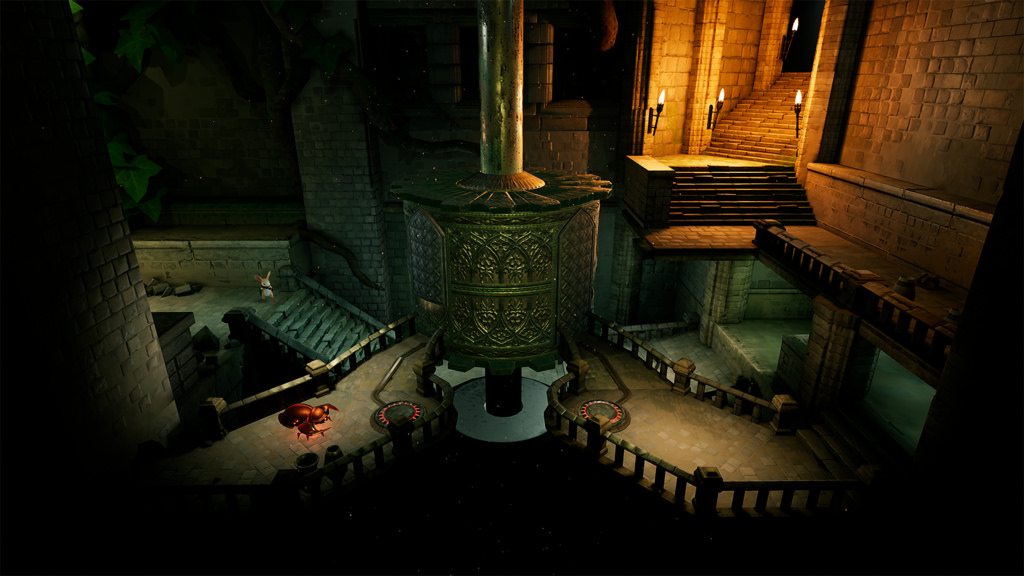 You’ll have a birds-eye view of each area, but you can lean in to get a closer look, and a glowing outline of Quill will appear if she disappears behind walls.

It’s not the only surprise; the play session opens on a beach, takes Quill and I through those mines and spills us outside a distant fort. Throughout the colors are muted, and oppressive stillness permeates every location. There’s a disquieting darkness to this adventure to rescue Quill’s loved one; less fairytale Disney, more dark fantasy Jim Henson. And Moss is better for it.

You can see it wherever you look. As human-sized god bonded to this mouse you’re continually viewing this world from two perspectives. Quill’s own reshapes the usually insignificant; tree tops become looming dark clouds, a ditch becomes a hill to transverse. Ours sees the stories of the ruins around her. 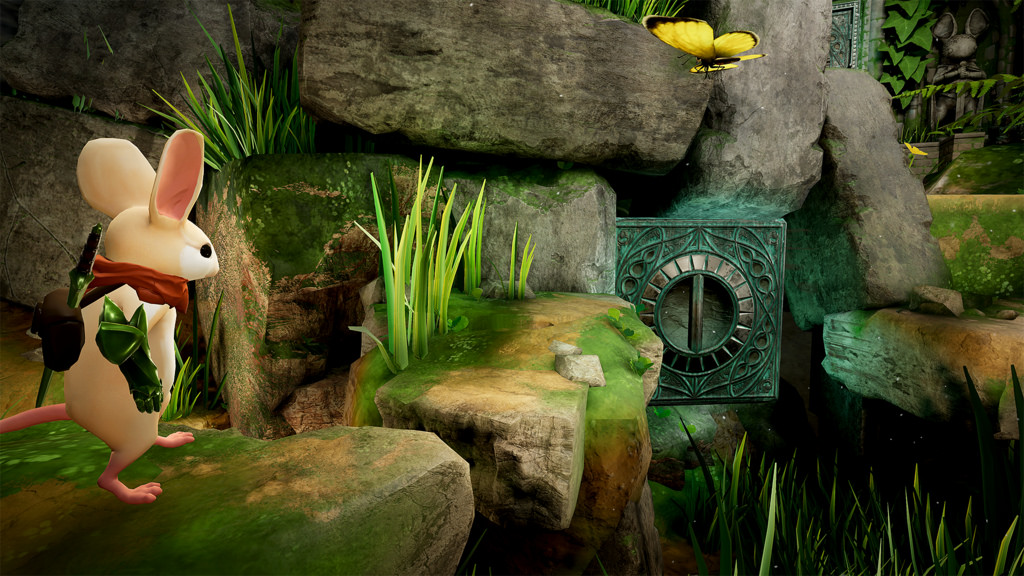 The game’s name is a nod to the world rather than the individual journey. Quill’s just one story on a planet filled with them.

Early on Quill takes refuge under an oddly angled overhang. She can’t see the bigger picture: we can. The overhang is the wing of a gigantic, armoured figure half-buried in sand; a relic of a civilisation broken by the world an age ago.The game’s camera angle gives such visual hints a fresh perspective.

And that’s true of Moss as a whole thanks to its use of PS VR and its gameplay duality: a fresh perspective on the genre. I’m looking forward to see what’s next for our journey together, and to juggling multiple puzzles at once.

Continue the journey with our interview with the game’s creator Polyarc right here, get some cool wallpapers for the game here, and finally check out PlayStation Access’ own impressions of the game here.