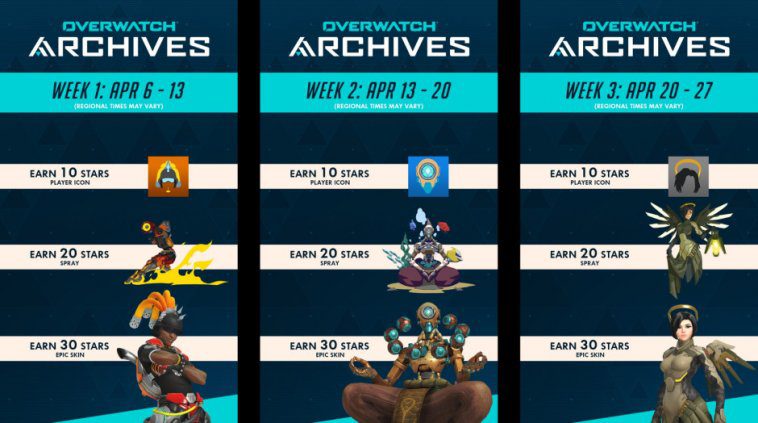 Experience the past while fighting for the future during the annual Overwatch Archives event on Xbox One and Xbox Series X|S. Take on story-driven co-op missions from pivotal moments in the past, test your mettle against new deadly new Challenge Mission modifiers, and earn historically-inspired loot from April 6 to April 27.

New ways to play and earn

With the launch of the Overwatch Archives event, you’ll also find a new way to earn weekly rewards. Instead of the “Win 9 Games” system from previous events, you’ll now earn stars as you play games, winning not required. Choosing harder modes and playing the week’s featured mission will grant additional stars. Each new week will also come with new rewards like the Corredor Lúcio (Epic), Subaquatic Zenyatta (Epic), and Camouflage Mercy (Epic) skins.

Up for a challenge?

Set your feet down in familiar territory with some dangerous new twists. Take on brand new Challenge Mission modifiers like invulnerable barriers, bullets that heal whoever you’re not hitting, and enemies that just straight-up deal damage to everything around them. (You’ll need some fancy feet for that last one.)

Level up your collection

Earn an Archives Loot Box the first time you complete each Archives Mission for a chance to unlock loot like the new Legendary outfits of war for Zarya, Genji, Windowmaker, Soldier: 76, and Tracer. Archives Loot Boxes are also available for purchase for the event duration–pick up 50 and get 10 free!

The Archives are now open–we’ll see you heroes in the alleys of King’s Row, the halls of Rialto, and the streets of Havana!

☆☆☆☆☆ 423
★★★★★
$59.99 $19.79
Get it now
Online multiplayer only. Requires Xbox Live Gold, sold separately. Join the fight for the future in the Game Awards’ winner of “Best Ongoing Game.” Take your place in the world of Overwatch and choose your hero from a diverse cast of soldiers, scientists, adventurers, and oddities. Bend time, defy physics, and unleash a dizzying array of extraordinary powers and weapons. Engage your enemies in iconic locations from around the globe in the ultimate team-based shooter. This download includes: • The full game • 5 Legendary Hero Skins • 5 Epic Hero Skins • 5 Origin Hero Skins • And more!

Related:
Talking Samurai Warriors 5 with Producer Hisashi Koinuma
This Week on Xbox: April 2, 2021
MLB The Show 21 is Coming to Xbox Game Pass on Day One