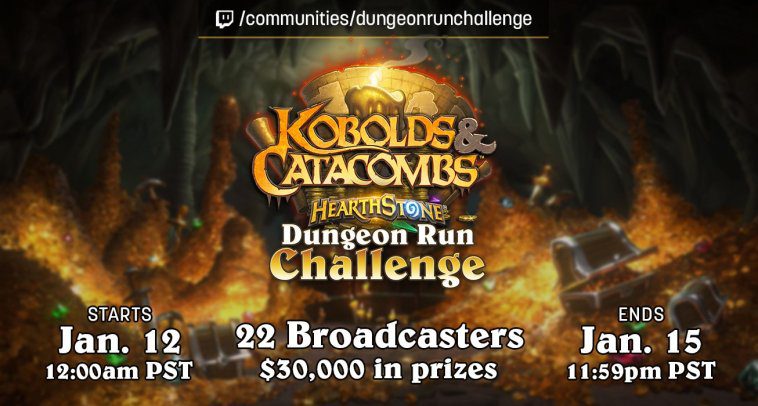 Last December, we kicked off the Dungeon Run Challenge alongside the launch of Hearthstone: Kobolds and Catacombs. Over $30,000 in prizes are at stake, and now that the dust has settled, only the most worthy and cunning remain. Now we begin Phase Two of the Challenge: a Sudden Death Survival Round tiebreaker with the following 22 broadcasters:

For Phase Two, our finalists will once again clear the Dungeon Run and obtain the Candle King cardback. This time they get only one full run attempt, so there are no account resets or server switches.

There are nine classes to clear in Dungeon Run, and each will count as a separate round. However many attempts they take to clear a class will count as their “score” for that round. In sudden-death survival style, finalists scores will be prioritized by sequence of their scores. This means the later in the runs they fail, the stronger their tiebreaker score will be. The top three nine-round score in chronological order of clear will be declared the winners!

John starts on a fresh account and decides to start with Warrior. He clears all nine classes in seven hours in the following order and gets these results:

This means that if by the 5th round everyone else has failed at least once, he is guaranteed to be the 1st place winner because no one else has survived that long without failure.

However, if all other competitors tie until the 6th class with just one attempt per class, this means John will not land in the top three.

Each finalist will have four days to clear the Dungeon run mode on a new account. Every defeat or retire will count as an additional attempt. The three best scores in the Survival rounds will be declared the winners. If necessary, in the event of a tie, further scheduled tiebreakers will be announced.

Phase Two of the Challenge begins at on Friday January 12th, 12:00:00 AM PST and will conclude on Monday January 15th at 11:59PM PST. Any submission after the deadline will be invalid. If you want to watch along, we’ll update the “Dungeon Run Challenge” Community tab where you can find all the broadcasters participating in Phase Two. Hit the “follow” tab to receive updates on the action!

For full info on the Dungeon Run Challenge, click here.