A time of madness and chaos has descended upon the world of Smite. An immortal being of cosmic horror has emerged from his watery prison, spreading insanity and strife across the land. To some he is known as The Great Dreamer. But those whose nightmares he haunts carry his true name on their lips as they reach the precipice of insanity and go hurtling into a chasm of pure madness: Cthulhu has awoken!

Who is this eldritch deity, and how will his arrival impact the world of Smite? Cthulhu is the High Priest of the Great Old Ones, a race of cosmic entities that was ancient before the Earth was formed. Cthulhu lay sleeping in his underwater prison of R’yleh for untold ages, safely submerged in the darkest depths of the oceans as man unknowingly traversed the waves above. But even in ageless sleep, Cthulhu’s power affected humankind, causing discomfort and despair for those who were touched by his dreams. And now he will awaken, and the gods of Smite will be tested like never before.

Cthulhu has a rich literary history, and it was important to us to stay true to those depictions for his representation in Smite. His traditional physical descriptions — as a fierce and intimidating monster with an iconic squid head and wide, leathery wings – informed his visual design as a playable God in Smite, while his ability to inspire madness in those who encounter him were the basis for his ability kit.

So how did we translate Cthulhu’s ability to instill fear and insanity into his gameplay on the battleground of the gods? We started with the insanity aspect as the basis for his kit. In Smite, Cthulhu has the ability to drive rival gods insane, causing them to experience a unique set of audio and visual confusion effects. The madness of his enemies only makes Cthulhu stronger, eventually allowing him to “break” other Gods who are under his influence, allowing him to become even more powerful every time he does so! Cthulhu’s sheer size is just as terrifying as his appearance and mental powers, which is why we designed his ultimate ability to integrate the idea of Cthulhu being a truly gargantuan entity. Activating The Great Dreamer’s ultimate changes his visual appearance and allows him to increase in size to become the largest playable God ever in Smite!

We needed to make Cthulhu terrifying to behold and lots of fun to play, but we were also intent on weaving his introduction in with the grand storyline of Smite. Being immortal and all-powerful, the deities of Smite rarely need to consider the repercussions of their actions. In our current storyline, the gods are racing to prevent a plot launched by Persephone to poison the World Tree and spread corruption throughout the land. Little do they know that an even greater evil is about to threaten not only the battleground of the gods and its surrounding realms, but the very minds of the gods that vie for control of those realms! The gods have often fought and defeated enemies who rely on brute force and raw physical power to wreak havoc, but can they triumph over the darkness hidden within their own minds?

But Cthulhu isn’t just entering the world of Smite: he’s bringing part of his submerged prison of R’yleh with him! Starting with this update, jump right into the action in the updated Cthulhu-themed Arena map, perfect for new players who are learning how to achieve victory on the battleground of the gods or existing players who want to start mastering Cthulhu immediately. This newly updated map allows you to get a glimpse of the madness-inducing sunken city in which Cthulhu was imprisoned before he broke free to wreak chaos on the Battleground! 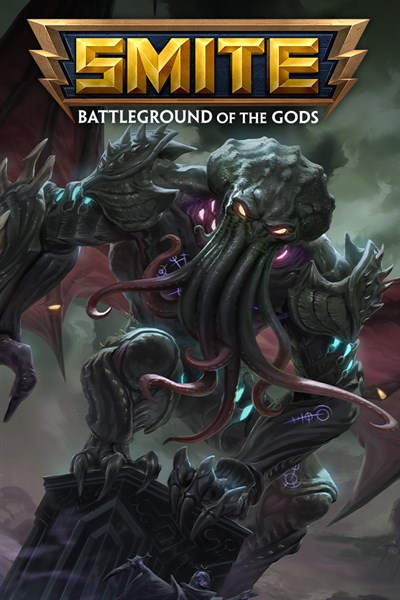 ☆☆☆☆☆ 1342
★★★★★
Get it now
Xbox One X Enhanced
Enter the Battleground of the Gods Join 35+ million players in SMITE, the world’s most popular action multiplayer online battle arena. Become a legend of myth, enter the Battleground of the Gods, and play FREE now! 100+ Gods Unleash each deity’s unique strategies, legendary weapons, and earth-shattering powers. Rain lightning down upon your foes as Zeus, assassinate from the shadows as Loki, or transform and trick your foes as the Monkey King, Sun Wukong. Which God will you choose? Unique Perspective Unlike other MOBAs, SMITE puts you directly onto the battlefield with a third-person action viewpoint. From blind-side ambushes to aimed shots, a new pantheon of strategic possibilities awaits. Become Godlike Never played a battle arena before? Don’t worry. Auto-buy, auto-level, and the deathmatch-like Arena mode let you jump right into divine MOBA action. Aspiring pro? Top the ladders, join a competitive team, and you too could be playing at the SMITE World Championship. © 2012 – 2020 Hi-Rez Studios, Inc. "SMITE", "Battleground of the Gods", "Titan Forge Games", and "Hi-Rez Studios" are trademarks or registered trademarks of Hi-Rez Studios, Inc. in the U.S. and/or other countries. All trademarks and copyright material are property of their respective owners. All rights reserved.

Related:
Play with Pride: Discover Inclusive Xbox and PC Games Selected by LGBTQI+ Communities
Join EA Access for Only 99 Cents
Celebrate Who You Are Every Day with Minecraft