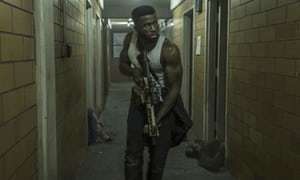 The First Purge will get its general release on July 4, but in the meantime, the reviews are starting to roll in. The film is a prequel of The Purge franchise. It follows a group of lower income people as they protest the purge and try to survive the night. The film is meant to illuminate the origins of the purge and offer some social commentary.

The film is directed by Gerard McMurray, as opposed to the series creator James DeMonaco, who directed the previous Purge films; DeMonaco stuck to writing on this one. It stars Lex Scott Davis, Y’Ian Noel (Insecure), and Marisa Tomei.

So far, the film has a score of 53 on Metacritic and 49% on Rotten Tomatoes. For more details about the good and the bad in The First Purge, check out the reviews below. The First Purge will be in theaters July 4.

“There’s nothing fun or thrilling about watching white people dressed up as real world hate groups efficiently murdering innocent victims. The Purge series’ veneer of fantasy is gone. It’s too on the nose, and it knows it. That The First Purge is a prequel means the people we see suffering in it are doomed to at least another 25 years of annual violence and oppression, a fact you’ll be acutely aware of as the dawn breaks on the first experiment, the few survivors limp down the street, and the tastelessly summoned Kendrick Lamar song “Alright” (“Alls my life I had to fight…”) thumps into life over your theater’s speakers.” — Michael Rougeau (Full Review)

“It’s likely that the film’s Purge-in-the-hood concept had more than a little to do with the success that Blumhouse, the franchise’s key production company, enjoyed with Get Out. Yet if a ‘Purge’ film built around the lives of African-Americans seems a totally good idea, and is more than likely to prove a commercial one, coming from Blumhouse it only highlights the difference between the two films. Get Out was a thriller with a devious texture, rooted in social and psychological experience. The First Purge is a slipshod dystopian pulp comic book rooted in gangbanger clichés. It’s a threadbare Boyz N the Hood meets Lord of the Flies.” — Owen Gleiberman (Full Review)

“Despite the assistance reality continues to give it, making an annual rite of government-sanctioned racial violence seem less far-fetched by the day (or by the tweet), Gerard McMurray’s The First Purge still fails to establish a persuasive connection to our own moment in time — its occasional winks to current events serving as limp zingers instead of stinging commentary. Though its action and few novel elements may satisfy many of those who’re willing to pay for a fourth visit to this unconvincing dystopia, series creator James DeMonaco (serving only as screenwriter here) appears to be running out of ideas for the franchise.” — John Defore (Full Review)

“Clumsy attempts at comedy are weaved in to try and alleviate the remarkable grimness but all it really does it add to an uneven tone. By the time black characters are given the agency to fight back, there were mass audience cheers greeting the catharsis but the victories are minimal, arriving after so much dour brutality. The First Purge isn’t going to be the last Purge (a 10-part TV series arrives in September) but the premise remains awkwardly handled, a surer hand needed to balance the issues at play. It’s hard not to admire an attempt to bring tough societal trauma to the multiplex but in this particular package, it’s even harder to recommend.” — Benjamin Lee (Full Review)

“The First Purge is another absurd B-movie, uneven and ludicrous across the board, but altogether transfixing for the way it funnels Trump-era terror into an empowering crowdpleaser.” — Eric Kohn (Full Review)

“While some of the Purge movies have been unexpectedly good, not just as horror-thrillers but as movies, this is not one of them. It’s a still-rare showcase for a raft of talented black actors, as well as up-and-coming black director Gerard McMurray. But the screenplay for The First Purge, by franchise creator James DeMonaco, is not quite imaginative enough to keep from getting monotonous after a while.”– Alissa Wilkinson (Full Review)

“Maybe it was inevitable that the franchise would circle around so far that it’d begin to eat its own tail. There no longer seems to be a point or message to be conveyed by the violence that the Purge incites; an early thread about how crime doesn’t pay is abandoned as the criminals in question turn out to be heroes, rolling out as the neighborhood’s defense squad without circling back to the fact that the drugs they deal are detrimental to the community. (It doesn’t help that some of the characters are caricatures and stereotypes, ranging from cartoonish drug addict to sassy friend.) It’s also strange to watch the film vacillate between damning violence against these people, and then turning around to condone — or even cheer — violence against others. The point about inequality, or at least any sense of nuance within it, gets lost in the mix.” — Karen Han (Full Review)