A new day is dawning in The Division 2 as Agents are gearing up to head back to where it all began. The Division 2 Warlords of New York expansion is now available on Xbox One, and it’s opening up four new zones of Lower Manhattan, teeming with enemies and run by sinister new villains under the command of rogue Division Agent Aaron Keener. It’s also heralding the arrival of Seasons, which are packed with new events, new challenges, and new rewards. A new endgame advancement track, an overhauled gear and weapon stat system, and revitalized Dark Zones are among the other changes coming to The Division 2 in the biggest update to the post-pandemic open-world shooter yet.

You’ll need the base game to play the expansion but fear not:
there are bundles on the Microsoft Store to get you outfitted properly. And
whether you’re a seasoned Agent or a new recruit, every purchase of Warlords of New York comes with a Level
30 Boost, which you can use on any of your Agents to jump right into New York
City.

Specifically, you’re heading to Lower Manhattan, where a
recent summer hurricane has left areas like Chinatown and Wall Street in ruins.
Hardy locals are banding together for survival in the storm-wracked city, but
the situation is fraught, to say the least. Into this power vacuum steps Aaron
Keener, the original rogue Agent, and his four lieutenants, also rogue Agents
with their own ideas on how to succeed where the Division failed.
Unfortunately, their definition of “success” involves a new biological threat
to civilization, so it’s up to you and your fellow Agents to hunt them across
the four new zones. As you take out each lieutenant, you’ll earn a new Skill
for your trouble, including a deceptive decoy, a shocking trap, and the return
of an explosive old favorite: the sticky bomb launcher.

Beyond the hunt for Keener lie a host of new endgame
challenges that offer new ways to test your skills, and new rewards to
customize your Agent’s look and loadout. They are organized in Seasons, which
as three-month-long events that encompass a variety of new content, starting
with a Seasonal Manhunt for new high-priority targets in New York and D.C. The
first Season kicks off on March 10.

Seasons will also include Global Events that activate combat
modifiers to switch up the way you play; for example, the first Global Event,
Polarity, assigns a positive or negative charge to both you and your enemies.
Attack enemies with the same charge as you to deal extra damage, and switch
between polarities by reloading, swapping weapons, or melee-ing an enemy to
avoid the shocking consequences of attacking a foe of the opposite charge.

Additionally, new Leagues will offer a way to measure your
enemy-slaying skills against other players in timed PvE challenges with
leaderboards. And while Global Event and League challenges offer their own
rewards, anytime you participate in any seasonal activity or simply play the
game during the Season, you’ll increase your Season Level and earn loot from
the seasonal progression track. Players who want to collect additional rewards
for their progress can purchase a Season Pass, but for the first Season, the
Season Pass is free as part of your Warlords
of New York purchase.

With so much do to, active Agents will soon be well on their
way to the new level cap of 40, but your progression won’t stop there. A new
SHD level system gives you a way to continually improve your Agent’s base stats
as you face down more and more foes. Significant changes to the loot system
make weapon and gear stats more clear, enabling you to more easily put together
an impactful loadout and see the results in combat, whether you’re taking on
the factions of NYC and D.C. or braving the Dark Zones, which have been
refreshed with a simpler Rogue mechanic and more rewarding player-to-player
interaction.

Today is the day, Agents. The Warlords
of New York expansion is available now,
and the streets of New York City aren’t going to clean themselves up. Grab
the expansion from the Microsoft Store, send up a flare to recruit a few
allies, and show Keener and his crew what real Division Agents are made of. 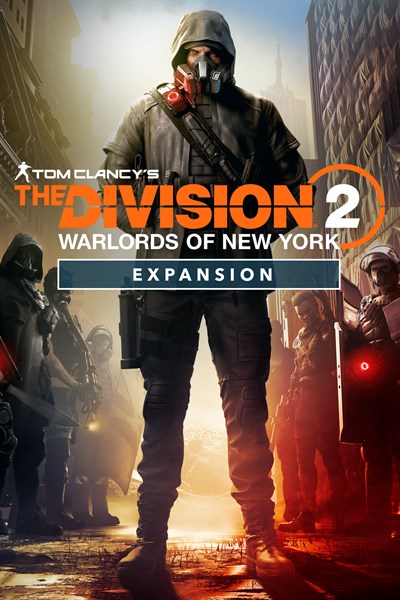 ☆☆☆☆☆ 43
★★★★★
$29.99
Get it now
"Warlords of New York" Expansion will be unlocked automatically in-game on 3rd March. Purchase before April 3 for a level 40 weapon and outfit. New York is under threat. Aaron Keener, a former Division Agent turned rogue, has taken control of Lower Manhattan, backed by four devoted and highly skilled lieutenants. Trained by The Division but disavowing its ideals, they are now the highest authority in town and the most formidable force the Agents have ever faced. Play in single-player or online co-op: – A gripping new story, hunting down your nemesis – A level 30 boost, allowing you to jump right into the Warlords of New York campaign – A new open world in New York – A revamped progression system with a level cap increased to 40 – New tactical options: exotics, gears, and skills – An extended endgame, including thematic three-month seasons Tom Clancy’s The Division® 2 Warlords of New York is a narrative expansion to Tom Clancy’s The Division 2 and requires the base game to be accessed.

Related:
Space Engineers Rolls out to Xbox One on April 15
Xbox Insider Release Notes – Beta Ring (2004.200226-0000)
Name That Owlet! Xbox Hosts Ori and the Will of the Wisps Celebration at the San Diego Zoo Safari Park