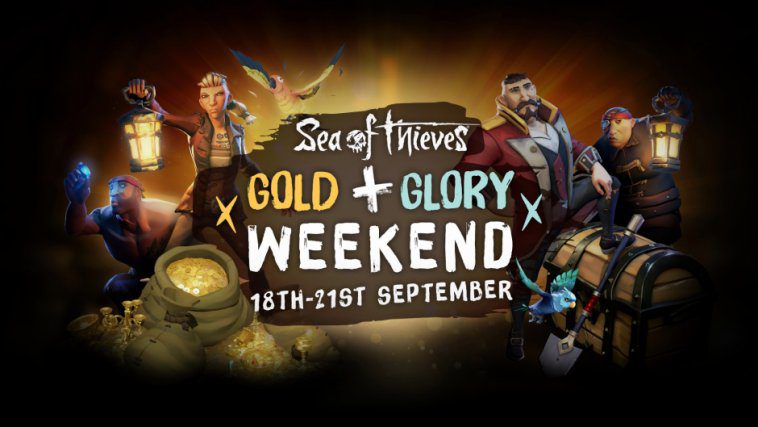 Here we are again, approaching that most important day of the year for pirate enthusiasts worldwide! With Sea of Thieves recently passing 15 million players, we’ve got a lot of pirates to cater to, from grizzled veterans to fresh-faced rookies and every kind of adventurer in between. So this year we’ve gone all out with different ways to celebrate talking, playing, flaunting and fighting like a pirate!

On Talk Like a Pirate Day itself, all our players will be able to scoop double the usual gold and reputation gains when handing in treasure thanks to the latest Sea of Thieves Gold & Glory Weekend, running from September 18-20 – with the extra incentive of a free storytelling emote for curious pirates who dive in with Xbox Game Pass.

Haven’t actually got the game yet? Give it a whirl as part of the Xbox Free Play Days offering from September 17-20, when anyone with Xbox Live Gold can download and play free for the duration. There’s no better time to invite your friends to the Sea of Thieves! Smitten with Sea of Thieves after your first experience? Grab it at a discount throughout the weekend! To enjoy these reductions in real-world gold, you’ve got from September 18-20 on the Xbox and Windows Store, and 17-20 on Steam.

If you’re a relative newcomer to the seas, we’ve got you covered this year. Not only do we have a refreshed version of our Everything You Need To Know About Sea of Thieves video coming up on our YouTube channel before the big day, we’re also polishing the first batch of explanatory articles for our new Pirate Academy, where Sea of Thieves characters break down the basics and offer their wisdom on how to set yourself up for a long and successful seafaring life. Look out for those on the Sea of Thieves website soon. In the meantime, if you’ve yet to pick a Trading Company to align with for your early Voyages, we’ve put together a Pirate Personality Quiz to help you find out where your priorities match up!

Already fully invested and out there on the seas seeking treasure? In addition to Gold & Glory Weekend there’ll be a new round of Twitch Drops, this time offering an opportunity to pick up the Ancestral Ship Set inspired by Ori and the Will of the Wisps. Kicking off on Talk Like a Pirate Day, this runs from September 19-24 and offers different ship parts each day just for spending some time watching Sea of Thieves Partnered streamers. Meanwhile, any players who’ve been enjoying the ever-growing soundtrack selection available on streaming and download services will be pleased to hear that Becalmed – Seafarer’s Song, a new vocal version of that much-loved ocean melody, will join the tracklist on September 18.

So yes, there’s a lot going on around Talk Like a Pirate Day this year! Xbox Game Pass Ultimate members can even get themselves set up to Talk Like a Pirate on the go, as cloud gaming came to Android devices this week. Join our crew on Twitter, Facebook, Instagram and YouTube for more pirate fun and games, and however you celebrate, make sure you celebrate with Sea of Thieves!

New to Sea of Thieves? Join the fun with our Maiden Voyage, a narrative-driven tutorial experience. New players will begin their travels within this scenario, which provides guidance and information to fledgling sailors. Learn more about Sea of Thieves at www.xbox.com/seaofthieves, or join the ongoing adventure at www.seaofthieves.com where you can embark on an epic journey with one of gaming’s most welcoming communities!

Related:
Free Play Days – Hunt: Showdown, Warhammer: Chaosbane, and Sea of Thieves
Spiritual Successor to the Momodora Series, Minoria is Available Now on Xbox One
Explore One Wasteland and More in Fallout 76’s Patch 22 on Xbox One